At the Digiday Publishing Summit last month in Vail, Colorado, we surveyed representatives from 49 publishers to learn about their video strategies. Check out our earlier research on C-suite publisher executives’ mixed feelings about Facebook here. Learn more about our upcoming events here. 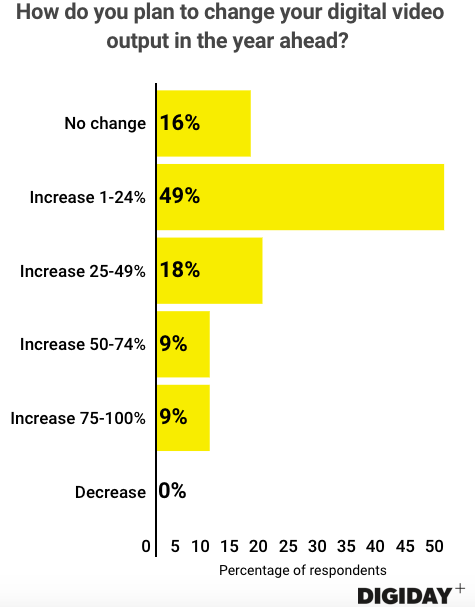 For publishers that failed in their attempts to pivot to video, two main factors contributed to their demise: Facebook’s deprioritization of publishers in its news feed resulted in a drop in their video views; secondly, many publishers generate most of their video views on social platforms and those views are notoriously difficult to monetize.

As publishers continue producing digital videos, their expectations around potential revenue and business opportunities must be realistic. As one participant from the Digiday Publishing Summit in March put it: “We just have to set expectations. If you want to be on the top 100 sites on the internet, there is only a quantifiable amount of inventory, and it’s not going to be $8 [CPMs].”

Publishers favor YouTube to host videos
YouTube is the clear favorite platform to host and distribute publishers’ videos ahead of publishers’ owned sites, according to Digiday’s survey, which found that nearly three-quarters of publishers will put their videos on YouTube in 2018. 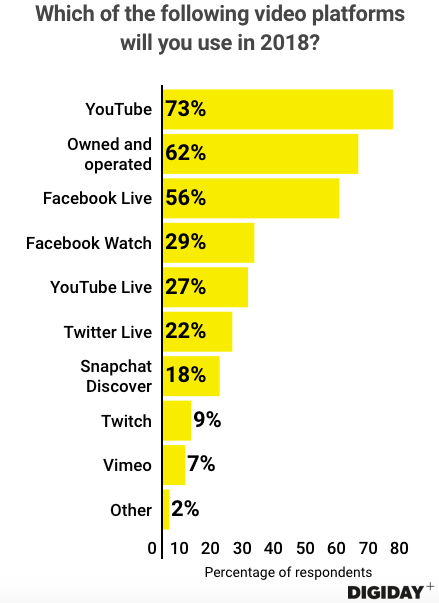 Publishers make more of their digital video ad revenue on their owned and operated websites than on YouTube, according to Digiday’s earlier research. However, ad revenue isn’t necessarily publishers’ motivation when distributing videos on platforms, with over half of publishers in previous Digiday research saying that reaching new audiences was their primary objective for distributed video. That makes YouTube, with 1.5 billion logged-in monthly users, an obvious place to start for publishers.

Beyond scale, YouTube offers publishers benefits to post their videos to the platform, including the ability to directly sell the ads that will appear in front of their content. “We have gone all-in on YouTube because that has the best monetization path,” one publisher executive said.

Platform spending makes OTT attractive
With Netflix, Amazon, Hulu, HBO and CBS all planning to spend more than $1 billion in 2018 on original content, publishers like Vox, Fusion Media Group and Condé Nast Entertainment are producing OTT and TV content. Over 40 percent of publishers that Digiday surveyed say they plan to make long-form content for OTT and TV platforms. 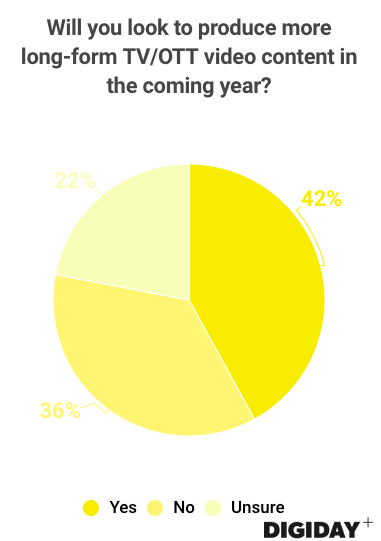 Digitally native media companies such as NowThis, Cheddar, Ozy, Vox and BuzzFeed are already creating this content. At the Digiday Video Anywhere Summit in November, 96 percent of the publishers surveyed said they believe more digitally native media companies will create more OTT or TV content. Having failed in the pivot to digital video, publishers could now be pivoting to OTT and TV.