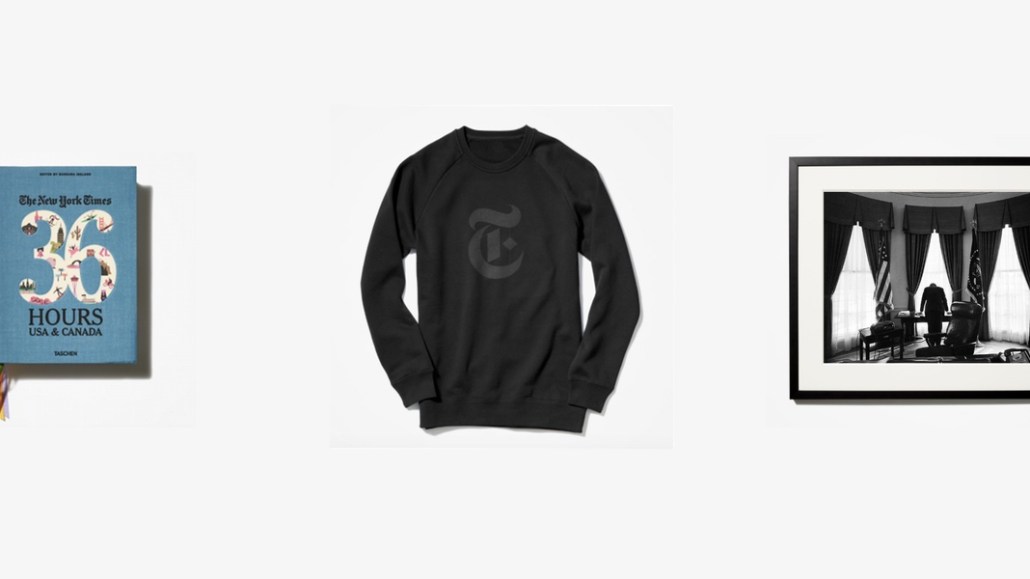 The New York Times is doubling down on brand, with a new digital store that will sell branded goods ranging from umbrellas ($65) to sweatshirts ($55) and tote bags ($115) — and more standard fare like repackaged articles, selections from its photo archives. The idea: The Times is, yes, something of a lifestyle brand.

“As our focus shifts toward having the biggest, highly engaged, highly passionate audience, [we ask], ‘How do we help them express their connection to the Times, the way great modern consumer brands do?’” said David Rubin, the Times’s svp of audience and brand strategy.

The New York Times Store has historically operated far away from the Times’ core business, both literally and figuratively. Up until last year, its developer team was based in Scandinavia; its designers, consultants scattered across the United States, didn’t touch other parts of the Times’ brand, and the store’s marketing was done independently.

Yet it still managed to make some money. The Store has pulled in “millions” in annual revenue for the last “several years,” according to Steve Mayne, the Times’ executive director of commerce, though a company spokesperson refused to be more specific about those totals.

For the relaunch, the Times dumped a lot of the random goods like this wooden pie box that distinguished its earlier incarnation. It also tweaked a lot of what it had sold in the previous store, including prints of photos and front pages from the Times archive and packages of older stories. Mayne said it either tweaked or replaced “98 or 99 percent” of all the products the old store offered.

But the emphasis now is on branded goods like T-shirts ($28) and baseball caps ($55), which are produced in bulk and housed in a warehouse, unlike other publishers that hawk apparel. “If you want to make high-quality branded goods, you can’t print them on demand,” Mayne said.

In the coming months, the Store will also add a kind of curated products section, where Store staff source products from third party vendors; the Times declined to name specific vendors it might work with. Those products will likely be drop-shipped or sold on an affiliate basis; Mayne said no plans exist to hold inventory it sources from third parties.

The new store will also be more efficient, Mayne said. Instead of a developer-built storefront (and the Scandinavian developers), the company switched to Shopify, a platform more than 400,000 retailers use to power their e-commerce operations. It now uses the Times’ core design team to help produce Store products, including its apparel. Those and other moves reduced the number of people working on the Store from 16 to six, and Mayne said the newly formed commerce unit — containing The New York Times Wine Club and Times Journeys — could also help make the Store more efficient.

Mayne and Rubin said they are still figuring out how to promote the store to readers. One possibility is introducing new subscribers to the shop during their onboarding process. Other options include a push during the holiday season, and integrating store content into some of the Times’ popular newsletters.

“The one thing we don’t want to do is jump the line ahead of getting people to subscribe,” Mayne said. “The store takes a back seat to all of that.”