The state of podcasting in five charts

When the IAB kicks off its third annual podcast upfront next week on Sept. 7, it should look and feel very different from previous years.

Before last year’s event, attendees anticipated the debut of IAB guidelines for the format. This year, attendees have had months to think about market leader Apple’s launch of analytics for podcasts, sample from the bumper crop of branded podcasts that market leaders like Gimlet Media have produced and process the flurry of funding rounds podcasting companies have announced this summer: $7.5 million for Art19, $15 million for Gimlet and another $15 million for HowStuffWorks.

Here is a look at the state of podcasting in five charts.

Nearly a quarter of all Americans listen to podcasts regularly
After a brief period of slowing user growth, podcasting experienced a small uptick in 2017, rising from 21 percent in 2016 to 24 percent in 2017, according to a report produced by Edison Research and Triton Digital. 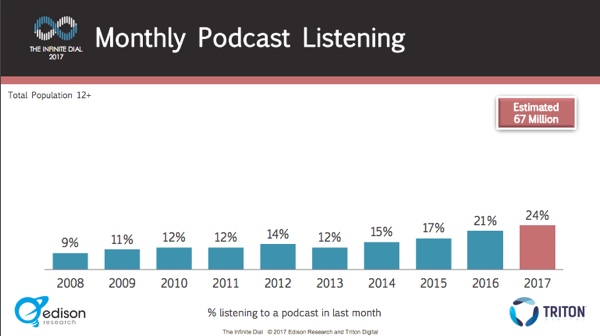 New listeners are highly likely to become regular listeners
Podcasting’s proponents often call it an addictive format. Research released last month by Bridge Ratings Media Research suggests those claims are true. Bridge Ratings found that year over year, light podcast listeners (those who listen to about one show per week) are more likely to increase their consumption than they are to drop off or even to remain the same. A survey of light podcast listeners found that nearly half of them upped their consumption to two to three shows per week. 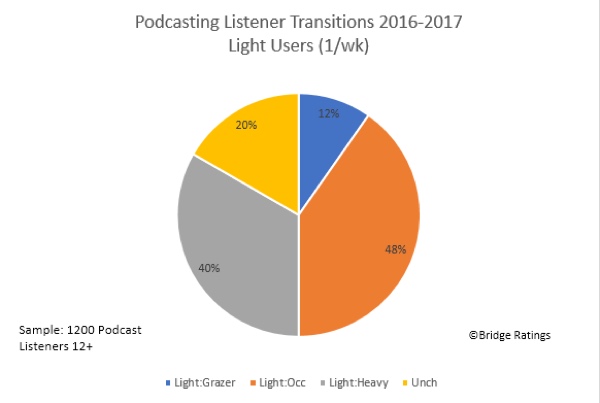 A separate survey of a group of even lighter listeners, which Bridge Ratings labels “grazers” (those who listen to one to three shows per month), found 45 percent of them turned into weekly listeners year over year. 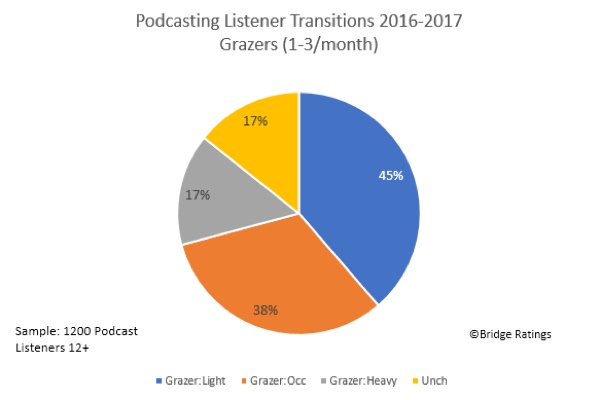 Stars are emerging
Breakout hits such as “Serial” and pioneering hosts including Marc Maron and Bill Simmons are go-to reference points when discussing podcasting’s popularity. But the reality is that in 2017, the constellation of stars and shows that consistently drive large audiences is growing. The 10 most popular podcasts each average over 1 million downloads per episode, and nearly one quarter of the 100 most popular podcasts gather at least 500,000 downloads per episode, according to a report podcast analytics firm Podtrac published in June.

Platforms are investing in original content
Because podcast listeners tend to listen to shows frequently, a growing number of platforms have invested in original programming as a way to attract listeners. 2017 saw Google, Spotify and Tidal all unveil original U.S. programming for their platforms, joining Amazon, Pandora, Scripps-owned Stitcher and Slacker.