How Pop-Up Magazine gets sponsors to do live ads 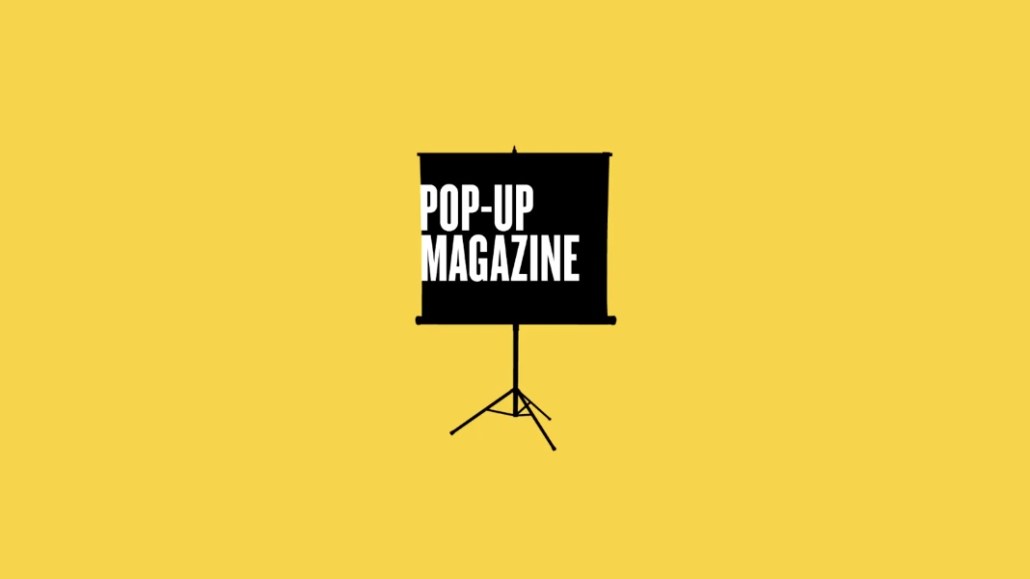 Publishers talk about giving advertisers their audience’s attention all the time. But Pop-Up Magazine, a traveling variety show of performances, lectures and storytelling, will take this to the extreme when it hits the road to share its first “issue” of 2017.

Four advertisers will give live, multimedia presentations to small audiences. The ads, which often involve video or are part of a larger buy that also includes Pop-Up-owned The California Sunday Magazine, help drive revenue on three fronts for the startup: the sponsorship of the live event itself, the creative services required to create the presentations and ad space in the magazine.

“We’ve been getting a little better and more sophisticated in how we’ve brought sponsors onto the show,” said Chas Edwards, Pop-Up Magazine’s president and co-founder.

Pop-Up started as an experiment in San Francisco eight years ago, but it’s been a venture-backed media startup for the past three. This is the third year ads have been part of the proceedings. It’s worked with 20 advertisers in that time, ranging from financial institutions like Citibank to car companies like Lexus and tech brands like Google Play.

While Edwards did not share a specific renewal rate, some sponsors have returned to the show: MailChimp has advertised in Pop-Up shows since 2014, and all of the sponsors of Pop-Up’s 2016 programs have either renewed or are in conversations about renewing for later this year, Edwards said.

The Pop-Up value proposition hinges on the undivided attention of a small but desirable audience. The California Sunday Magazine has a print circulation of 350,000 (down from 400,000 at its launch in 2014), and Pop-Up’s stops are at midsize theaters; the largest on this upcoming tour seats 1,600 people. If the seven-date tour sells out, only about 10,000 people will see the spots.

Yet getting in front of Pop-Up’s audience isn’t cheap. While a print sponsorship starts at $50,000, a multiplatform campaign spread across the stage, California Sunday’s print and digital pages, plus creative work can cost upward of $1 million.

“The budgets for these kinds of opportunities come from different sources,” Edwards said. “We leave it to them to figure out what it means for their procurement process.”

Most of the Pop-Up spots are anchored to videos, like a “live trailer” series it created for Amazon Studios. But Pop-Up’s creative team has found ways to tap into the live show’s trappings and setting. A Warby Parker campaign featured a crossword puzzle printed inside the show’s program, with hints to the puzzle’s longest clues revealed during the event; a live activation for the Detroit luxury goods brand Shinola involved an after-party that guests were invited to at the end of the show.

“[The live ad] has to accomplish two things at once,” Edwards said. “It has to be powerful and high-impact for the sponsor, and it has to be as rich and entertaining and surprising as the rest of the show.”