Digiday Research: For most publishers, video is less than 25 percent of total content

“Pivoting to video” has been the talk of the digital media industry recently, with Mashable, Vocativ, Mic, MTV News, Fox Sports, LittleThings, Bleacher Report and Vice all making the shift to video.

But Mashable, an early proponent of the move, was reportedly sold for $50 million to Ziff Davis after being valued north of $300 million just two years ago. Soon after that news broke, BuzzFeed and Vice, both heavily invested in video, announced they would miss their upcoming revenue targets.

So much for the pivot to video, right?

Digiday’s prior research found that 82 percent of U.S. publishers and 94 percent of European publishers were planning on increasing their video output in the next year.

Despite this, the majority of U.S. publishers produce video sparingly. At the Digiday Publishing Summit in September, we surveyed over 50 leading executives about what percentage of their content was video. 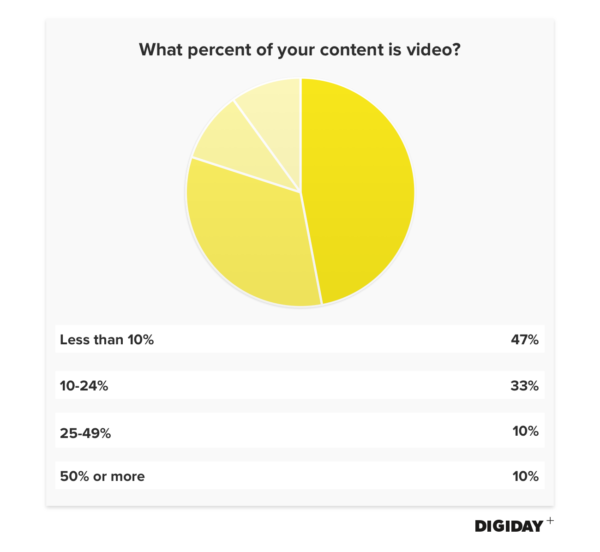 However, the pivot to video will surely be slow. The struggles of Mashable, Vice and BuzzFeed serve as a warning for any publisher chasing video ad dollars.

In-house video production remains a challenge, with publishers previously noting it as their greatest weakness, with cost being the most prohibitive issue. And unfortunately for publishers, the price associated with producing digital videos has actually gone up in recent years with technological advancements, not down. Meanwhile, publishers are struggling to monetize their video views through Facebook’s mid-roll ad format.

Pivoting to video might be the latest fad, but it appears unsustainable.