Facebook’s recent announcement that it would alter its algorithm to favor posts from friends and family prompted publishers to re-evaluate their audience strategies. As traffic from Facebook declines, many publishers are looking to other platforms to pick up the slack.

Digiday conducted an online survey of media executives to see what platforms they are prioritizing in the wake of Facebook’s algorithm changes. Apple News had a slight edge over Facebook, while Flipboard and Snapchat were an afterthought. 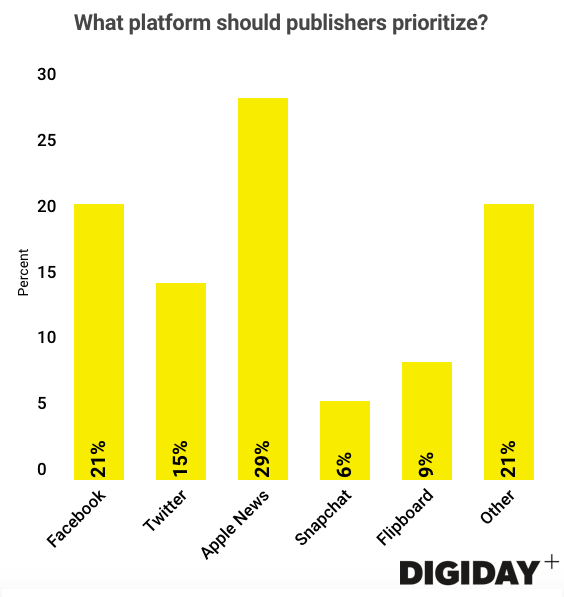 Apple News: Apple News remains a long way from replacing Facebook, both in terms of scale and referral traffic. Apple News has around 70 million users, compared to Facebook’s 2 billion-plus monthly users. That said, referral traffic from Apple News is seeing growth each month in the “double-digit percentage points” that could make it an increasingly viable option, given that Apple sold 223 million iPhones — which the Apple News app comes installed on — in 2017 alone. With over 700 million iPhones in use worldwide, converting those iPhone users to readers could help publishers fill the gap left by Facebook.

Media companies like Stylist have found it technologically simple to publish to Apple News, which encourages publisher adoption. Apple News also lets publishers sell ads directly for the content in the app and keep the 100 percent of profits. However, monetization on Apple News has challenged publishers. Adopting Google’s DoubleClick ad server and introducing videos on the platform will ideally help publishers resolve monetization headaches.

Facebook: Declining reach of publisher posts on Facebook isn’t new, and many publishers continue to post to the platform after the latest news feed tweak. Facebook’s algorithm change led some publishers to focus on Groups that have yielded higher engagement than posting content to company pages.

Twitter: Publishers have noticed an uptick in referral traffic coming from Twitter, but even before Facebook announced its news feed change, Twitter was courting publishers to host their livestreaming video. Twitter diligently promotes publishers’ live videos and lets publishers sell ads directly across their video content. Publishers are more adept at selling their own content, which has in turn made Twitter more attractive from a revenue perspective than other platforms. These changes aren’t helping Twitter acquire more users, though, which could hurt it in the eyes of publishers looking to replace Facebook.

Flipboard: Flipboard, which has 4,000 publishers on its platform and 100 million users, recently moved away from its fast-loading mobile article format in favor of letting publishers use it as a way to refer traffic back to their owned and operated sites. Although Flipboard is small compared to Facebook in terms of traffic and users, many publishers are happy to have a traffic source not named Facebook or Google. Flipboard also gets top marks from publishers for its easy setup.

Snapchat: Publishers have often complained about how difficult it is to make money off Snapchat. While some publishers such as NBC News have experienced success with the platform, others have struggled with it, with CNN axing its Snapchat show.

Snapchat is attempting to convince publishers to use it as their video platform, though, recently hiring TV producer Seth Goolnik. The company said in its most recent earnings call that content was one of its top three priorities for 2018. The effects of Snapchat’s redesign on user consumption of publishers’ content is still unknown and could cause them to pause their plans for the platform.

Other platforms: Publishers have tested LinkedIn, Instagram and even Reddit, but Google is now unavoidable. In December, Google surpassed Facebook as their top traffic referrer. Google’s Accelerated Mobile Pages have been a boon to publishers and helped erase some losses from Facebook, even if they work almost too well. Much to the delight of many publishers, Google recently announced it would test ways to promote publishers’ subscriptions to readers — a potentially critical move as publishers look to diversify their revenue streams. Publishers, seeing the consequences of Facebook dependence, could be unwilling to enter into a similar situation with Google, but they may have little choice.