At the Digiday Media Buying Summit last month in New Orleans, we sat down with 63 media-buying executives to learn their biggest concerns about the digital advertising industry. Check out our earlier research on the Facebook-Cambridge Analytica scandal’s impact on online advertising here. Learn more about our upcoming events here.

Meeting campaign goals and transparency go hand in hand
As major brands reduce their marketing budgets, agencies are feeling the pressure to perform. Digiday asked 63 media-buying leaders in a survey to rate their level of concern about a variety of issues, and ensuring campaign performance ranked at the top, with 77 percent of respondents saying they were significantly or extremely concerned about it. 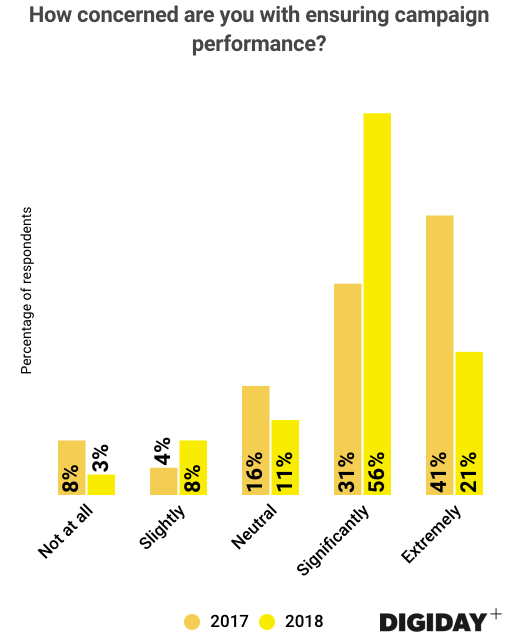 At the Digiday Agency Summit in October, we posed the same question to a broader group of agency executives, the majority of which were media buyers, and respondents similarly indicated that ensuring campaign performance was their top concern. Media buying is a low-margin business, so agencies have little room for error when proving their effectiveness.

Transparency issues, such as ad fraud, arbitrage and murky billing in contracts, are an obstacle to meeting campaign objectives. Seventy percent of respondents surveyed at the Digiday Media Buying Summit indicated they were concerned about transparency in media buying, a 15 percent increase since October. As a result, advertisers have made resolving transparency-related issues a key objective in 2018. 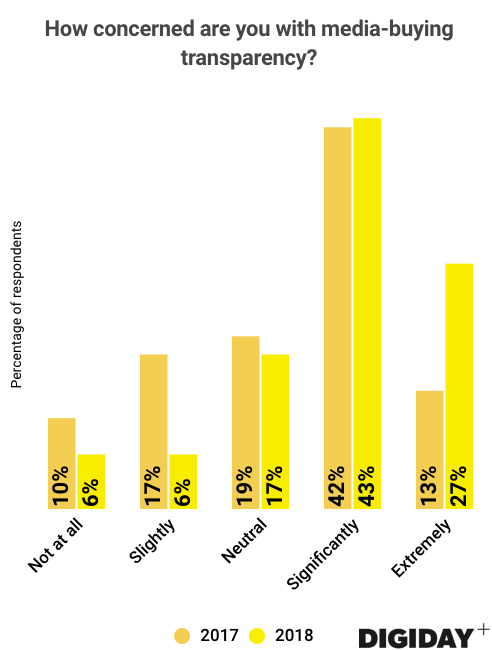 Resolving transparency issues is not simple. A recent study by Adobe claims that as much as 28 percent of traffic to websites could be from bots, presenting a conundrum for media buyers as nonhuman website interactions are responsible for a significant amount of fraud.

Media buyers at the event shared pessimistic views on ad fraud and other transparency-related issues. “It’s a mess out there,” said an anonymous media buyer at the event of the digital advertising landscape. “Most people have good intentions, but there are so many instances of getting spoofed or running outside where [the campaign] was agreed to run.”

Media buyers are also finding that advertisers now constantly evaluate their contracts with agencies. Forty-five percent of advertisers in a World Federation of Advertisers survey said they’re working toward more transparent relationships with their media partners.

Addressing media and data arbitrage seems to be a priority, with 62 percent of brands in the WFA survey saying exposing data arbitrage is a key objective in 2018.

Fears about decreasing digital budgets recede
Media buyers were spooked last year after Procter & Gamble announced it was cutting more than $100 million in digital advertising. Many were worried that other major brands would follow suit and question the efficacy of their digital spending, ultimately leading to a reduction in spending. But brands are sticking to digital advertising, and media buyers appear to be less worried. Just 7 percent of respondents to Digiday’s March survey were significantly or extremely concerned about decreasing digital ad budgets, down from nearly 30 percent of agency respondents in October. 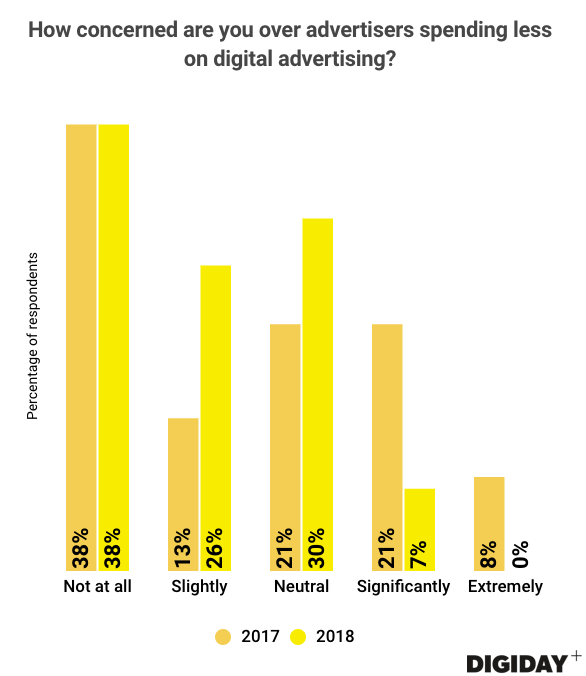 Most media buyers don’t have to worry about decreasing digital ad budgets. EMarketer projects that digital ad spending in the U.S. for 2018 will rise almost 19 percent to $107.3 billion. Despite digital advertising’s faults, most brands believe it’s a reliable marketing channel. At the Digiday Marketing Summit in December, 88 percent of brands surveyed said they believed digital advertising was an effective marketing strategy. 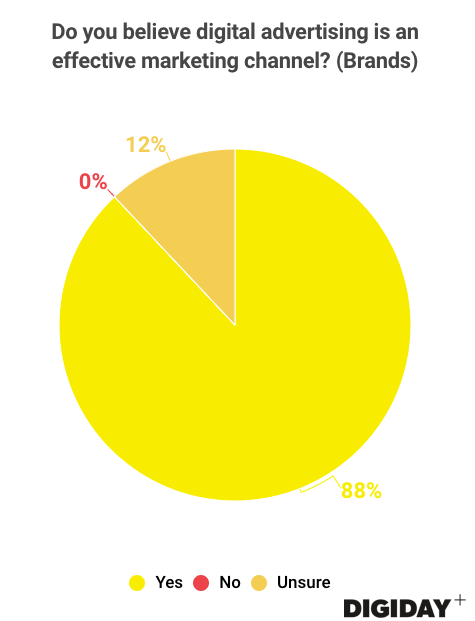 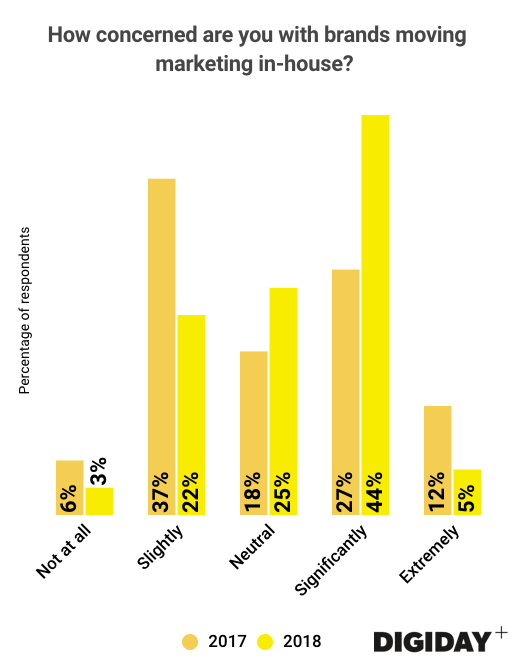 Netflix is one of a handful of companies running media buying internally, but it can only do so because of its financial investment in media buying, vast quantity of data available to target users and ability to attract top media-buying talent. Most brands lack the necessary resources to establish internal media-buying operations, and it’s a difficult undertaking.

P&G is among a handful of companies looking to bring more media buying in-house. Moves like these pose a serious threat to media agencies, so media buyers are justified in their concern. Media-buying agency Hearts & Science risks losing $261 million in media spend from P&G after the advertiser decided to review its spending on hair care ads. Because P&G plans to spend more of its media budget through in-house buying, even if Hearts & Science retains P&G’s hair care business, it could be for less money than the initial contract.

Deutsche Telekom has a similar model. By relying on an in-house team to handle its programmatic buying, the company is working with more agencies through smaller contracts rather than one agency partner. This arrangement gives Deutsche Telekom more control of the media-buying process and access to local expertise, and it lessens dependence on external media-buying agencies. If examples like this become the norm, then media agencies won’t disappear anytime soon.