At the Digiday Media Buying Summit earlier this month in New Orleans, we sat down with 63 media-buying executives to learn how they’re implementing artificial intelligence and their concerns about competing with consulting firms. Check out our earlier research on how retailers are using mobile apps for consumers here. Learn more about our upcoming events here.

Robot media buyers?
AI is a hot topic in any crowd, especially for those worried about losing their jobs to the technology. A McKinsey Global Institute report from November predicts that 400 million to 800 million people will lose their jobs to AI by 2030. For now, however, media buyers seem to think their jobs are safe. Only 13 percent of respondents to Digiday’s survey believe AI will replace them. 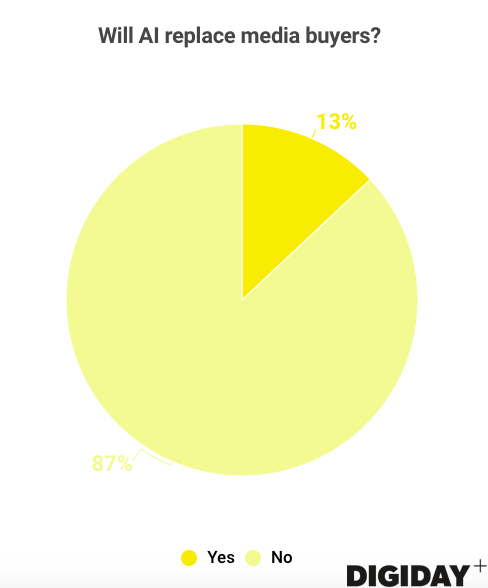 AI is improving the media-buying process by improving targeting capabilities and adjustments during campaigns. GroupM’s Xaxis uses AI in media buying to help determine optimal bid prices. Some agencies are turning to chief AI officers to bring AI into their businesses. In fact, 25 percent of media-buying agencies have started integrating AI into their media buying, according to Digiday’s survey. 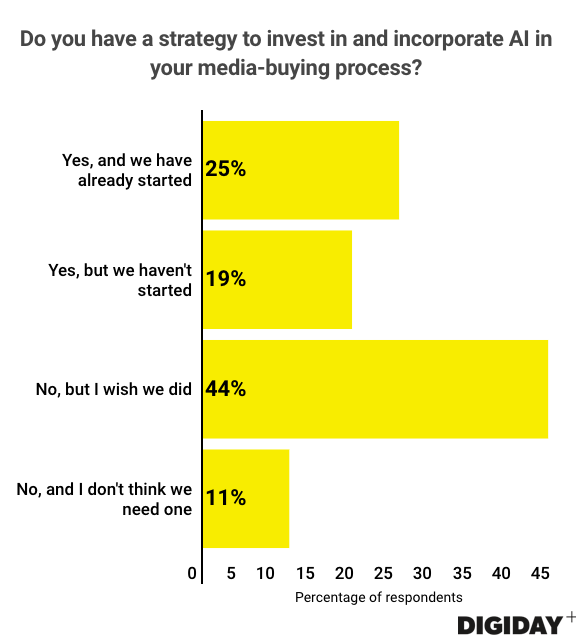 Specific companies such as Albert and Blackwood Seven offer fully automated media buying through AI, but they are the exception rather than the norm. AI technologies cost millions to develop, according to Mike Racic, president of media operations for agency iCrossing, and only a handful of companies, like Google, are capable of developing them. The odds of AI replacing media buyers’ jobs in the next five years are low, according to Josh Sutton, global head of data and AI for Publicis.Sapient.

Fear consultants, not robots
AI might not steal media buyers’ jobs anytime soon, but that doesn’t mean media buyers have job security. Seventy-six percent of respondents to Digiday’s survey believe consultancies pose a competitive threat to media-buying agencies. Many have predicted that consulting firms would come for agencies’ business. Others are less concerned, believing the threat of consultancies is more hype than reality. 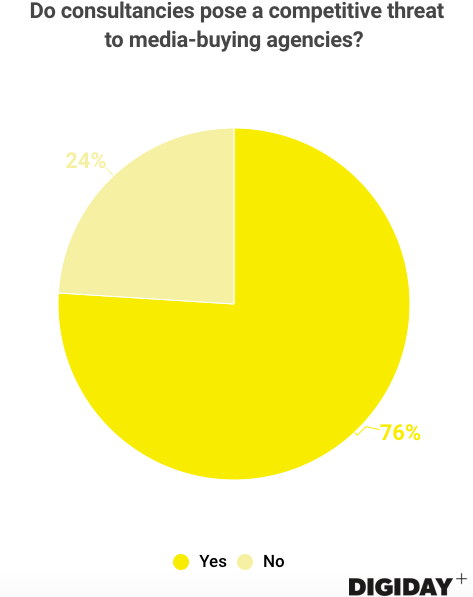 Rather than a sweeping industry change, consulting firms’ threat to media-buying agencies likely varies based on how individual firms approach their business models. Despite media buyers’ concerns about consulting firms, there is little evidence that suggests consultancies have an interest in media buying.

Following the 2016 report by the Association of National Advertisers on the lack of transparency in media buying, many clients have called on the agency arms of consulting firms, like Accenture Interactive, to help oversee their media spend.

Luckily for media buyers, many consulting firms find media buying to be a low-margin business they’re avoiding. PwC’s agency business generates over $1 billion in revenues and advises businesses on how to bring media-buying in-house, but the company has specifically avoided taking on media-buying responsibilities. IBM iX is another firm that has steered clear of conducting media buying for clients, instead advising in areas like how blockchain technology can reduce ad fraud and improve media transparency. 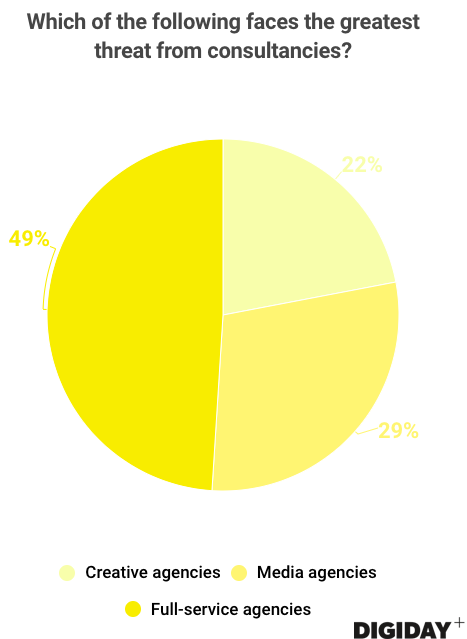 Firms such as Accenture Interactive, Deloitte Digital and PwC have recently acquired agencies, which are attractive because they each have developed a unique skill set, be it creative, strategy or analytics, that a consulting firm can then incorporate into its own business. This has given those firms a range of capabilities that mirrors those of full-service agencies and the larger holding companies.

Consultancies also get a deeper look into clients’ internal operations than typical agencies do. Rather than focusing on specific objectives like improving CPMs, consulting firms can examine businesses holistically and help them lower their overall cost per sale. A consulting firm that is already working with a brand can often also pitch its agency business as part of a companywide package for the brand. As one agency executive said in October at the Digiday Agency Summit, “We don’t go even go head-to-head with consultancies in pitches. They just add in the agency services for free.”

Concerns about consulting firms remain unchanged
While conversations about the threat of consultancies continue, the level of concern among agency employees remains constant. Compared to data collected at the Digiday Agency Summit, the number of respondents who were significantly or extremely concerned about competition from consulting firms rose just 2 percent. 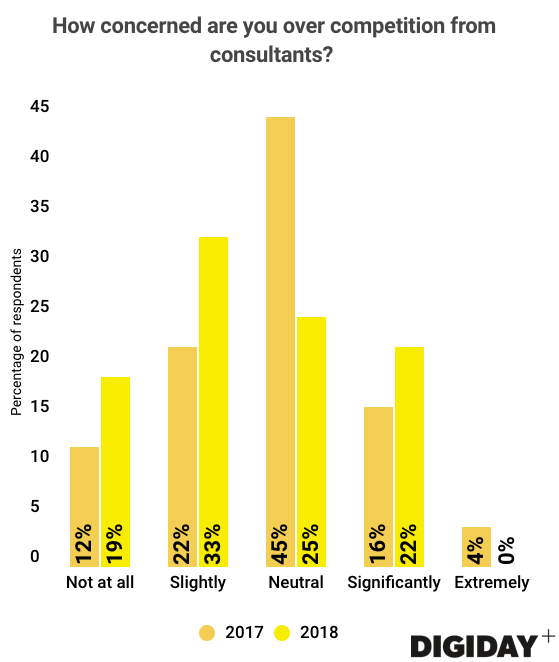 Many agencies are realizing that consulting firms must solve a number of problems, spanning from talent to expertise to technology, before they can overtake full-service agencies. Consulting firms must also figure out how to integrate the agencies they’ve acquired into a comprehensive offering.