Online advertising’s inner workings haven’t been well-known to most people. One study that Syracuse University published in January 2017 found that two-thirds of consumers surveyed didn’t know third parties had access to their data or that they were being tracked after leaving a site.

But awareness is building. Thanks to events such as the Facebook-Cambridge Analytica scandal consumers are becoming more aware of the tracking techniques used by online advertisers, which could result in changes to how marketers can target ads to users. In a poll of 60 Digiday+ members, 69 percent believe the Cambridge Analytica scandal threatens the status quo of how marketers collect consumer data. The fear is that as consumers voice opposition to the shady practices in online advertising, new regulations will restrict the information businesses can collect from consumers. 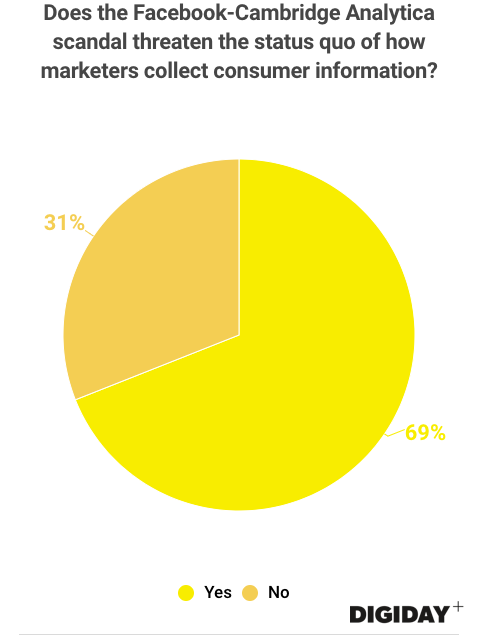 Facebook has already made adjustments in the wake of the scandal. While slogging through a public relations nightmare, Facebook announced late last month that it was shuttering its Partner Categories program, which allowed advertisers to use third-party data on consumers’ habits outside of Facebook and target them on the platform.

Facebook’s elimination of Partner Categories is part of its bigger effort to restore confidence in its data practices, but it could make advertisers rethink marketing on the platform. With less data available, advertisers could have more difficulty targeting users on Facebook. For now, it seems that fallout from the Cambridge Analytica scandal will be limited. While the advertising industry might not be happy about its tools being manipulated for political gain, few argue that ad tech will operate differently in the wake of the scandal.

While the #DeleteFacebook movement got a few notable endorsements in the aftermath of the scandal, most advertisers have stuck with Facebook. Sonos and Mozilla pulled their advertisements from Facebook, but they remain in the minority. Brands are reluctant to abandon Facebook, largely because it performs so well for them.

Given how the ad ecosystem benefits from relatively unrestricted access to consumer data currently, there’s little incentive for most parties in it to change their practices, despite industry executives calling for stronger data protections and transparency.

That could be a reason why 76 percent of respondents polled by Digiday say they believe the General Data Protection Regulation will have a greater impact on how advertisers collect and use audience data than Facebook’s Cambridge Analytica scandal will. It could also be because the GDPR, which will be enforced starting May 25, sets strict standards for how publishers, advertisers and third parties obtain consent from consumers to track their online behavior. The GDPR also attempts to address the transfer of data between publishers and third-parties, a hot topic given the recent developments. 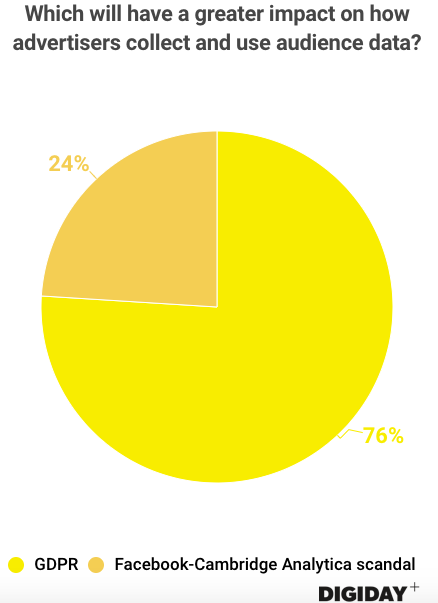 For European regulators, the Cambridge Analytica scandal gives the GDPR a massive public relations boost. The GDPR has received a fraction of the mainstream coverage that the Cambridge Analytica scandal has. That’s likely to change, though, as users pay more attention their data and rely on the GDPR to protect it. The scandal could also lead to stricter enforcement of the GDPR, making it harder for companies to shift blame for violations to each other.