At the Digiday AI Marketing Summit last month in Santa Barbara, California, we spoke with leaders from 37 companies interested in applying artificial intelligence to marketing about their readiness for AI. Check out our earlier research on how marketers aren’t rushing to develop voice marketing capabilities here. Learn more about our upcoming events here.

AI is a mystery
If you asked a room of 10 marketing professionals to define AI, you’d probably get 10 different answers. From machine learning to algorithms to neural networks, everyone has their own interpretation of AI. As one marketer at the event put it: “I think we’ve been using ‘artificial intelligence’ in different variants for a while, but there’s a fuzziness around what it can and cannot do.”

In a live poll of 63 marketing executives conducted during a session at the summit, 68 percent of respondents said nobody really understands what AI is. Respondents to a separate Digiday survey from the event didn’t rate their company’s understanding of AI highly, either. On a letter grade scale from A to F, with no plus or minus grades, roughly half of the marketers rated their company a C. While no one thought their company deserved an F, respondents were nearly as likely to say their companies deserved an A as a D. 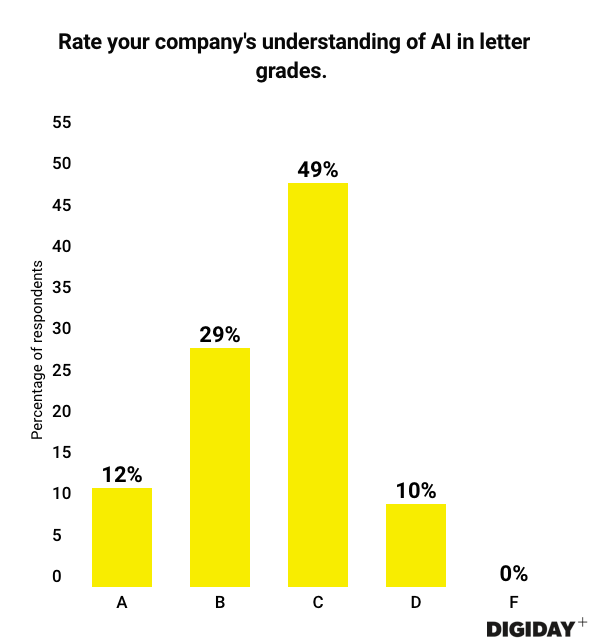 AI’s use in marketing grows
Companies might not understand AI well, but they’re still applying it to their marketing. Fifty-seven percent of the companies surveyed said they use AI, and another 30 percent of them plan to implement it. These results match findings from a Salesforce survey of digital marketers from July that found roughly half of marketing leaders use AI. 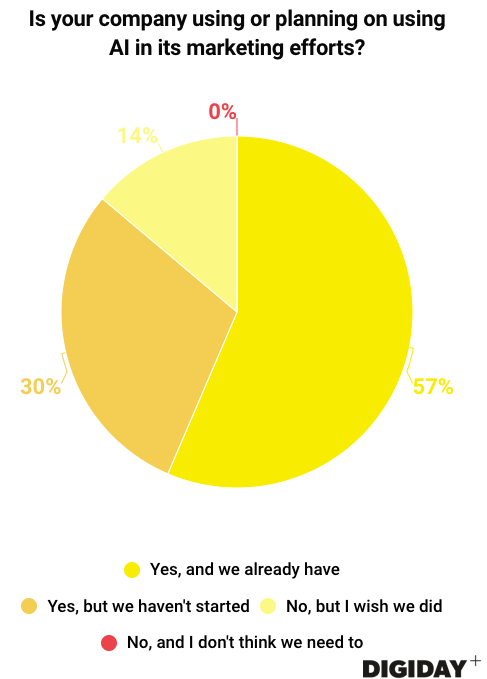 That adoption has increased since the Digiday Marketing Summit in December, when only 15 percent of companies surveyed at the event said they had implemented AI, and 31 percent of them had plans to.

AI is becoming a priority
Even though AI’s implementation to marketing might not be happening as quickly as expected, marketers have lofty expectations for it. 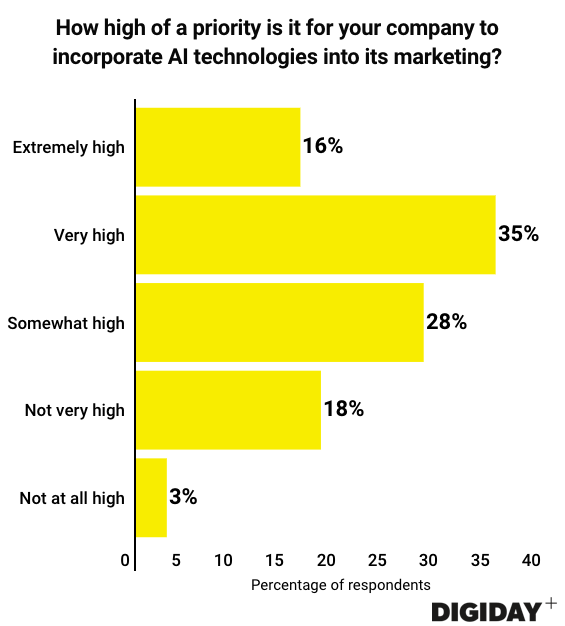 Companies should be wary of falling behind in the AI race. Every marketer Digiday spoke to at the event believed AI will transform marketing within the next five years.

AI teams are small, few and far between
When companies incorporate AI into their marketing, for the majority that means using a vendor or creating tools to complete specific tasks, like conducting media buys or pushing notifications for subscription renewals. Companies rarely have a team dedicated solely to AI-related marketing projects, according to Digiday’s survey. Only 27 percent of the marketers Digiday surveyed said their companies had AI-specific teams. 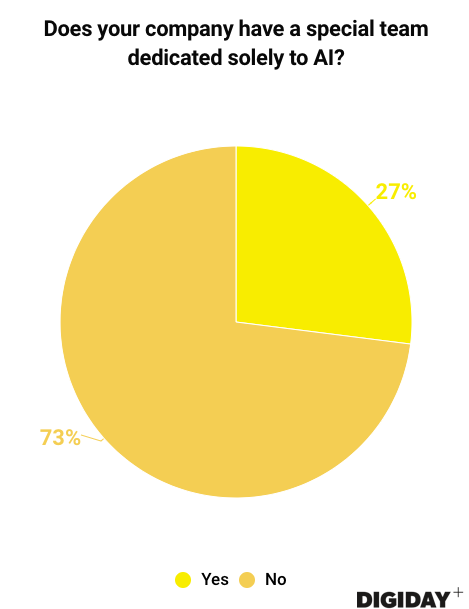 Agencies are likelier than clients to have AI teams because AI technologies are extremely expensive to create, often costing millions of dollars. Few companies are large enough or have sufficient financial backing to support such endeavors. Wunderman, which invested millions to create a 150-person AI division, has the backing of holding company WPP. Another major holding company, Publicis, created a 60-person AI team in its Publicis.Sapient agency. 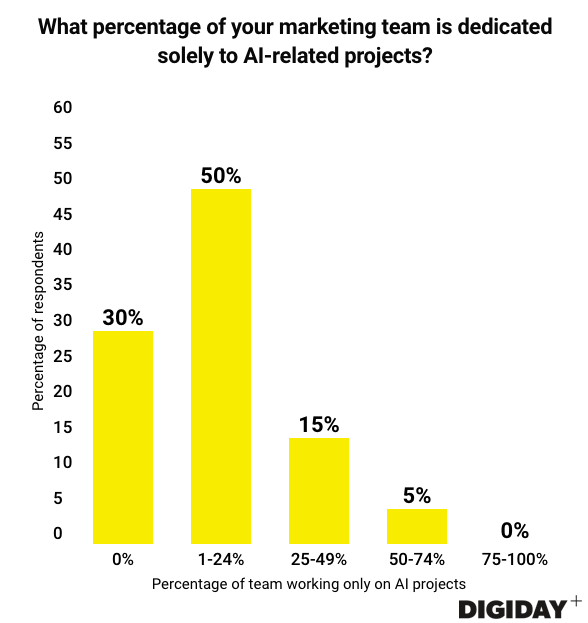 Budgets are a problem
Everyone wants to implement AI, but there’s confusion about funding it. “[AI] touches all these different teams,” said one attendee. “Who should pay for it? It’s a very cross-organizational technology. That’s what makes it tricky with budgets.” Because of that, multiple departments at a company end up paying for AI projects.

Of the marketers Digiday surveyed, 36 percent said AI funding came from more than one department. However, budgets for AI are most likely to come from that of the CMO or the CTO. Sixty-four percent said their company’s spending on AI for marketing comes from the CMO, while one-third said it came from the CTO. 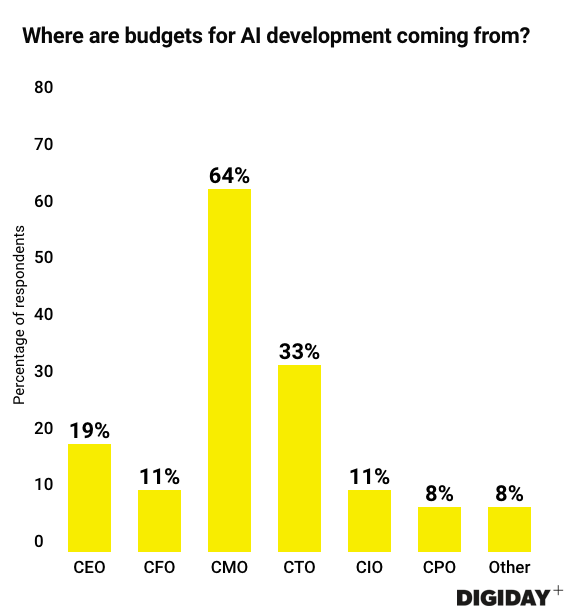 Depending on how a company funds AI, other departments or vendors could be in trouble. One anonymous agency executive said companies often cut their spending on print ads to fund AI marketing projects. This executive said that if advertising budgets for print can’t be cut or have already been cut, it’s common for companies to reduce the number of platforms or vendors they use.