The robust growth of Amazon’s ad business could be bad news for Google.

In a survey of 59 media buyers conducted by Digiday this March, 44 percent said their spending on the platform was, to some degree, coming from the reallocation of existing search budgets.

Google has been tapping into marketers’ search budgets virtually unchallenged for the past 15 years as its search engine emerged as the only real game in town for intent-driven advertising. But the continued rise of Amazon and its concerted push into advertising in recent years has presented direct-response marketers with a compelling alternative. And as marketers look to lessen their reliance on Google and Facebook more generally, a growing number are steering their budgets away from Google and towards Amazon where they can.

Advertisers are also allocating new ad budgets to the e-commerce giant. Nearly half of media buyers polled by Digiday said their spending with the company was coming, in part, from new ad budgets.

Amazon’s advertising strategy has been in part to strip away money flowing to Google’s search products. It’s worked to simplify its search products for advertisers and introduced new attribution tools to make its measurement capabilities more on par with Google. In some extreme cases, companies are switching as much as 60 percent of their search budget from Google into Amazon.

Most companies aren’t yet moving their budgets away from Google and Bing to Amazon at scale, however. David Hutchinson, national director of paid platform merchandising at iProspect said the most pronounced movement is coming from consumer packaged goods companies. Even there, Hutchinson added, the dollars moving are “not a huge amount, maybe 10 percent to 20 percent.”

Matt Mierzejewski, svp, search capability lead at Merkle said he doesn’t believe Google is losing money to Amazon overall, but rather that it’s losing out on growth. “Google is just getting less of the new search budgets and that’s what feels different for most advertisers in this industry,” he said. 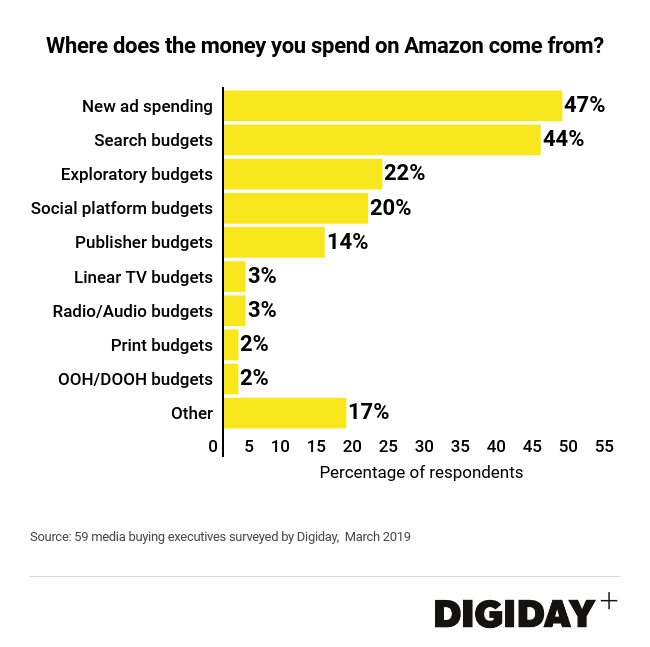 Despite the fact half of product searches now begin on Amazon, Google remains a critically important marketing channel from a branding and performance perspective. While 73 percent of media buyers plan to increase their spending on Amazon in 2019, according to earlier Digiday research, few media buyers currently rate Amazon as a “must-buy” compared to Google.

And often Amazon’s ad deals are being helped along by the leverage it enjoys from other parts of its business. With retailers, for example, Amazon will often create agreements where companies can commit to purchasing a certain amount of media from Amazon in exchange for greater retail margins, said Hutchinson. In that sense, Amazon is able to access new budgets via retail teams in addition to marketing ones.

Other companies are paying for Amazon advertising by reinvesting revenues earned from e-commerce sales on the platform. “Clients see the Amazon ecosystem as self-funded. They’re happy to reinvest 10 percent of their revenue from Amazon back into the platform and see it grow,” said Mierzejewski.

Regardless of where marketers find the money to spend on Amazon, they need to be conscious of the risks. Doing so can train consumers to shop exclusively on Amazon, which can hurt other areas of their businesses. More Amazon shopping also means marketers lose out on collecting valuable first-party data from users visiting their owned sites. There’s also no guarantee that marketers won’t be competing against Amazon’s expanding private-label products, if they are not already.