Google and Facebook’s dominance can, in part, be traced to one simple thing: Both make it exceedingly easy to spend money with them.

For rivals like Amazon, Twitter and Snapchat that means playing catch-up. In a survey of 49 media buyers at the Digiday Media Buying Summit in October, media buyers rated Twitter, Snapchat, and Amazon as platforms used for exploratory ad spending while Facebook and Google was the destination of their most important campaign spending.

Given a rating scale of one to five where one equals exploratory ad spending five equals most important campaign spending, Twitter was rated 1.7, Snapchat 1.9 and Amazon 2.0. Facebook wad rated a 4.4 out of five and Google was rated 4.6

Twitter, Snapchat, and Amazon are all working to make themselves more appealing to advertisers. Snapchat is opening itself up to third-party video measurement with Comscore and Twitter is ridding itself of fake profiles so marketers can be assured they’re actually reaching real people. Meanwhile Amazon released a new attribution tool to prove to advertisers the effectiveness of its ads.

“Snapchat and Twitter are nice to have while the others are must haves,” said Dooley Tombras, president of the Tombras Group. “If you have a big event, you might want to tap Snapchat or Twitter as an add-on, but it’s not essential.”

For Jay Friedman, president of Goodway Group, part of the problem for Twitter is how media buyers view it.

“I think Twitter faces a brand perception problem with brands and agencies,” he said. “Snap is for teens so if there’s the product for that then it’s the first choice. I’m not sure Twitter has that clearly defined audience.” 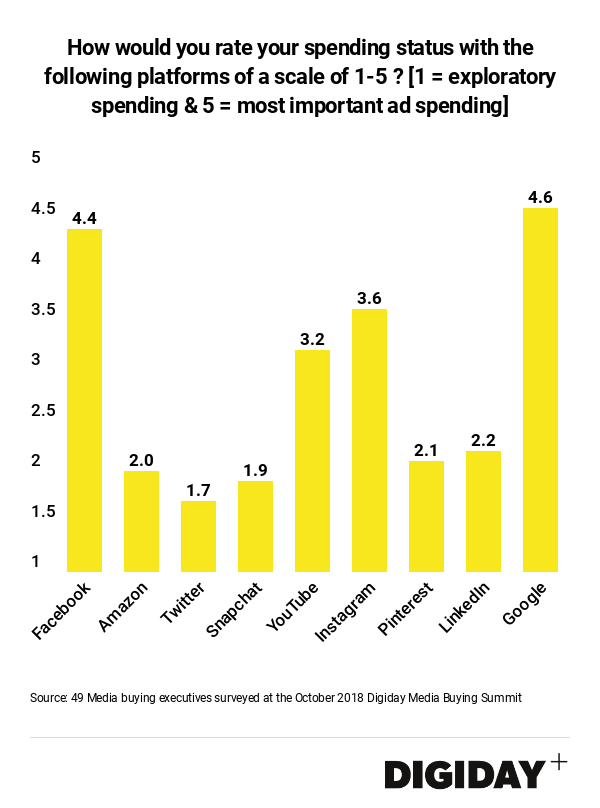 Alternatively Amazon’s ad business has quickly swelled to $2.5 billion dollars of revenue in the third quarter of 2018. Media buyers are attracted to Amazon now that it’s the largest source of online product searches and closer to the bottom of the customer purchase funnel than Facebook or Google. However media buyers have struggled to figure out Amazon’s interface and reporting structure, labeling it the hardest platform to advertise on according to earlier Digiday research.

For some media buyers, Amazon shares too little consumer data and lacks the sophisticated tools available on Facebook or Google. Both of which would allow media buyers to more aggressively recommend Amazon as part of their media plans to clients. Because of that media buyers are still testing the waters with Amazon before contributing major spending amounts.

Although Apple recently joined Nike as two of the largest companies to sell products directly on Amazon, many retailers are wary of becoming overly reliant on the e-commerce giant for fear of limiting the sales on their owned platforms where they can earn higher margins. As as result many are cautiously viewing advertising investments on the e-commerce giant, worried that they’ll be training their customers to shop on Amazon first.

Advertisers are also shifting dollars to Facebook-owned Instagram and Google-owned YouTube. Both were rated as somewhat important places for media buyers to advertise, but less so than their parent companies.

It’s understandable that YouTube and Instagram are rated below their parent companies. Video advertising is expensive and not always relevant for advertisers compared to things like search. Marketers also say YouTube still hasn’t done enough to smooth brand-safety concerns.

Meanwhile Instagram has become a box to check for marketers running Facebook campaigns. High performing and cheap ads coupled with an exploding audience of millennials could help convince advertisers to view it as equally important as Facebook.

Despite the difficulties Facebook and Google have imposed on marketers like Google restricting advertisers access to DoubleClick IDs, which limits advertisers’ attribution measurement abilities, or Facebook Ad Manager’s frequent crashes, the duopoly is still where advertisers most important ad spending happens.

“If there’s one thing that supersedes any kind of frustration marketers have with Facebook or Google, it’s ease,” said Friedman. “How easy is it to give one person all my money? As long as the performance is reasonable and mostly good then ease of use wins.”