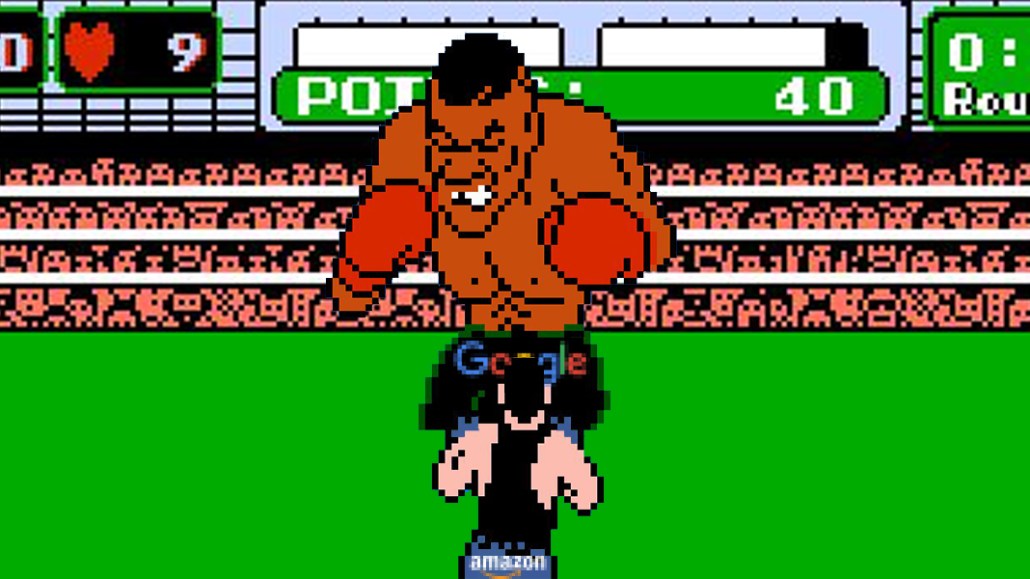 Google is known for dominating search marketing, but Amazon is giving Google a run for the ad revenue thanks to the rapid growth of Amazon Marketing Services, Amazon’s search marketing platform.

Media buyers said the e-commerce conglomerate has improved AMS over the past six months. While many brands are still learning marketing on Amazon, they are already sold by the performance of its search ad products, and Amazon is also pushing advertisers to spend more on AMS, according to agency executives.

Search advertising is also a big reason why WPP — which spent approximately $5 billion with Google and $2 billion with Facebook last year — plans to increase its ad investment in Amazon from roughly $200 million in 2017 to around $300 million this year, WPP CEO Martin Sorrell said in a recent interview with CNBC. “Fifty five percent of product searches in the U.S. emanate from Amazon. So that’s a big question for Google,” Sorrell said in the interview.

AMS offers three ad formats: Sponsored product ads that feature a “sponsored” label in search results, headline search ads that show up as the very first sponsored result beneath the search bar and product display ads that could appear in the right-hand rail on a category page or on a product detail page below the “Add to Cart” button. From October to December of last year, ad spend on sponsored product ads and headline search ads gained quarter-over-quarter increases of 64 percent and 75 percent, respectively, compared to 37 percent on Google Shopping, according to Merkle’s marketing report released on Jan. 25. The report is based on ad spend by over 100 brands in the U.S., and Merkle declined to provide the baseline number of those percentages.

“Amazon’s ad growth is stronger than Google’s because lots of ad formats on Amazon are fairly new to brands,” said Andy Taylor, associate director of research for Merkle. “But overall, ad investment on Google is much stronger than on Amazon.”

It may be normal for brands to advertise more through search marketing on Amazon during the holiday season, but five agency executives interviewed for this story said they saw an uptick in ad spend on AMS in general. A New York-based agency executive who prefers anonymity thinks it took a while for many brands to fully understand and trust Amazon, but after 2017, many have bought into the performance that Amazon delivers. “Brands are increasing their Amazon spend as a whole, rather than reallocating from other [ad] placements,” said this New York executive. “The ROAS [return on ad spend] [of AMS] is often higher than other search engines, due to how far down the funnel the searches are.”

Jacob Davis, vp and head of audience planning for iCrossing, also said most of his clients’ spend on Amazon is on search products, although his team continuously evaluates other ad opportunities on Amazon.

Sponsored product ads seem to be Amazon advertisers’ primary focus at the moment. This ad format accounted for 85 percent of all ad spend on AMS, followed by headline search ads (11 percent) and product display ads (4 percent), according to Merkle’s marketing report. Meanwhile, a Seattle-based executive said that on average, his clients spend 60 to 75 percent of their Amazon marketing budgets on sponsored product ads.

“With sponsored product ads, we can do keyword-based targeting and see the highest return,” said Danielle Waller, manager of SEM for Merkle. “There are more complexities going into headline search ads. For instance, you need to have high enough click-through-rate, otherwise Amazon will [stop running] your headline search ads. From an ad performance perspective, there’s no strict rule about sponsored product ads.”

James Thomson, partner of Amazon consultancy Buy Box Experts, agreed that sponsored product ads represent a majority of clients’ ad spend because they are straightforward and easy to set up. But another big reason why sponsored product ads have gotten so many ad dollars is because the format is also available to third-party vendors that usually don’t have access to headline search ads or product display ads.

No matter what ad format an advertiser plans to spend more on, ad investment in AMS will continue to grow. On one hand, Amazon is pushing media buyers to spend more on search by doing more follow-up than usual, as well as highlighting growth opportunities and optimization techniques to improve performance; on the other hand, agencies and clients themselves are driving the growth, according to Davis.

“As people are becoming more comfortable in the space and Amazon is making it easier for advertisers to spend, the results have improved, which leads to more investment,” he said.

Joe Migliozzi, lead for Mindshare’s commerce division Shop+ in North America, agreed that Amazon has been investing more resources into educating agencies and improving its advertising platform. “If we had the same search conversation a year ago, AMS was not this user friendly to media buyers,” said Migliozzi.

This year, Amazon seems like it’s planning to expand AMS to third-party vendors. On Jan. 25, the e-commerce giant’s in-house media agency, Amazon Media Group, sent Thomson a message that said: “Our charter this year is to focus on launching third-party brand [owner] sellers from search to display advertising — for a number of reasons.”