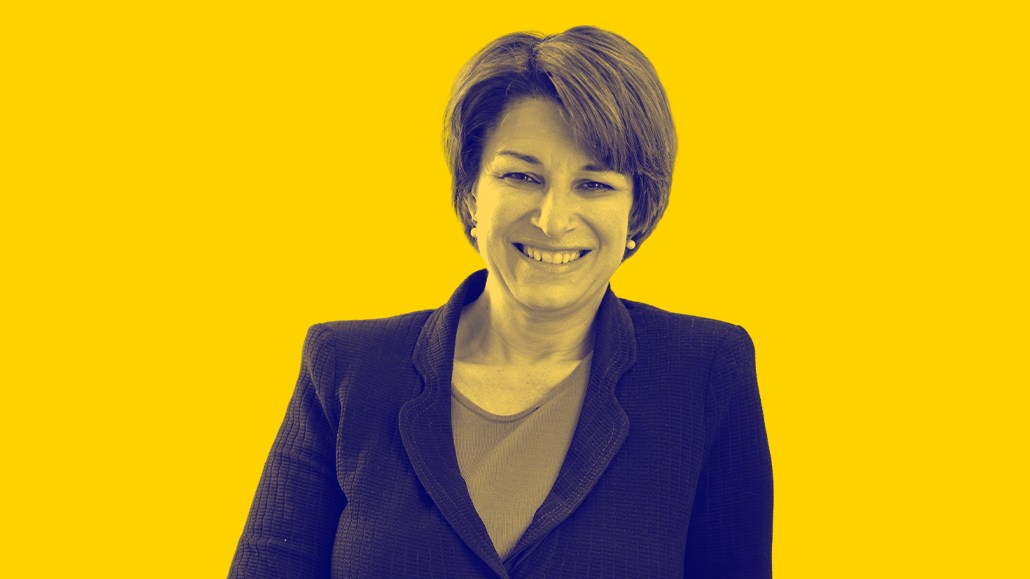 Sen. Amy Klobuchar believes antitrust reform is what it will take to preserve what she calls American capitalism.

The powerful chair of the Senate antitrust subcommittee has introduced and co-sponsored legislation that could alter liability protections for digital firms, put guardrails on health data use, require online political ad transparency and give publishers leverage in negotiations with tech platforms. And when she discusses her signature issue — antitrust reform —  the Minnesota Democrat often links it to other concepts like data privacy, media industry fairness and even the first amendment.

“Technologies are controlled by a handful of companies that have amassed unprecedented power,” said Klobuchar during her Jan. 29 State of the Net Conference keynote. Tech giants have control of “gateways over our personal data, power over what ads we see and what news we watch and monopoly power in key digital markets.”

Klobuchar has signaled support for a breakup of Facebook and Instagram, a dismantling of Google’s dominant ad infrastructure and regulatory inspection of data-hungry moves like Google’s FitBit acquisition. The senator took advantage of a spotlight moment for her antitrust crusade during this Monday’s Senate confirmation hearing of Merrick Garland, President Joseph Biden’s nominee to head up the U.S. Justice Department, one of the two federal agencies overseeing antitrust matters Klobuchar wants to empower with more money and resources.

“I suggest you look at Mark Zuckerberg’s email where he talked about purchasing nascent competitors, and I think the answer to that has got to come from the Justice Department. The answer, the reply to that email that this kind of exclusionary conduct is not the way capitalism works in America,” Klobuchar told Garland, alluding to emails sent in 2012 by the Facebook CEO that indicate the firm’s aim to buy Instagram as a way to ensure market dominance.

The Federal Trade Commission in December launched its investigation into Facebook, alleging the company has maintained its monopoly on the social media industry by acquiring emerging rival Instagram in 2012 and mobile messaging app WhatsApp in 2014.

Memories of a telco monopoly and her journalist father
To understand why reining in the big platforms seems like a particularly personal mission for Klobuchar, it helps to consider her background. She makes a point of reminding people that her father was a journalist – a Minnesota Vikings beat writer for the Minneapolis Star and later a columnist for what would become the Star Tribune.

To Klobuchar, anti-competitive behavior by the giants of tech has been fueled by a voracious appetite for personal data, which she argues helps fund disinformation and disadvantages the sorts of publishers her dad once worked for.

She evoked the memory of her dad during a September 2020 Senate Subcommittee on Antitrust, Competition Policy, and Consumer Rights hearing, claiming that Google’s dominance over the buy and sell sides of the ad tech ecosystem harms publishers. “Who are those publishers? They’re content producers, the Minneapolis Star Tribune, to me, given that my dad was a journalist, to me this is one of the key elements here because if you have unfairness in how that ad ecosystem is going, you’re depriving these news organizations at a time when the first amendment is already under assault of the revenue that they need to keep going.”

Klobuchar has also been known to harken back to her earlier days as a private-sector lawyer representing telecom company MCI (later acquired by Verizon) when talking antitrust and did so in an email exchange with Digiday. “As a young law firm lawyer, I saw my client MCI being held back by local monopoly carriers,” she said. “MCI, along with government enforcers, took on Ma Bell, leading to the breakup of that monopoly and fostering competition that lowered long distance rates and revolutionized the telecom industry.”

A complex collaborator
During her failed run for the 2020 Democratic presidential nomination, Klobuchar grabbed headlines for being a mean boss to her Senate staff. A 2018 report from LegiStorm pegged her annual staff turnover rate at 36 percent, the highest in the Senate.

But her campaign played up her midwestern charms and commitment to unity, encouraging supporters to host Hot Dish House Parties, which unintentionally sparked a casserole vs. hot dish debate in Iowa. “Hot dish is a great unifier — just like Amy,” said a Facebook event invite.

Klobuchar has emphasized bipartisanship and collaboration in her Senate career. GovTrack reported that 50 of her 79 bills and resolutions in 2019 had cosponsors from across the aisle. One legislative staffer whose office has worked with Klobuchar and spoke anonymously with Digiday said they “had nothing bad to say about her.”

“She’s a smart, serious person, and I think she’ll have a lot of native authority to act in strong ways on the issues she cares about,” said Cathy Gellis, an independent San Francisco-based internet lawyer who expressed concerns over a Section 230 reform bill that Klobuchar recently co-sponsored which would make platforms like Facebook and Twitter liable when paid content posted on their sites is used to target vulnerable people.

In the previous Congress, Klobuchar co-sponsored the bipartisan Honest Ads Act, intended to bring transparency and accountability to digital political ads, and the bipartisan Journalism Competition and Preservation Act of 2019, a bill championed by news publishers that would provide a four-year safe harbor period during which newspaper companies can negotiate compensation terms as a collective with the big digital platforms.

Klobuchar’s concerns regarding health data use aligned with her request two weeks prior for the Department of Justice to inspect Google’s Fitbit acquisition. “Google’s decision to close its acquisition of Fitbit while the transaction is under review is yet another sign of the company’s disregard for antitrust laws,” Klobuchar tweeted on Jan. 15. “I urge the DOJ to seek remedies to protect competition and consumers from anticompetitive effects caused by the transaction.”

The DOJ, several states and even a publisher group have filed antitrust lawsuits against Google, arguing that aspects of its search, digital ad business and decisions about third-party cookies are anti-competitive.

A perch for tougher antitrust enforcement
Klobuchar pointed to her bipartisan approach to work inside the Senate antitrust subcommittee in her 2015 memoir, “The Senator Next Door.” “Mike Lee and I have teamed up to co-chair the Judiciary Committee’s Antitrust Subcommittee and nearly every letter and announcement we’ve produced on that important subcommittee has been the result of collaboration,” she wrote regarding Republican Sen. Mike Lee of Utah, currently the ranking member of that body.

Klobuchar’s antitrust reform legislation seems to get much of her attention. She’s currently writing a book on that topic, slated to publish in April.

Antitrust lawyers say her place heading that subcommittee, along with her seat on the Senate Commerce Committee – which will decide on commissioners and a permanent chairman for the FTC, the other agency overseeing antitrust alongside the DOJ – give her a powerful platform to push her Competition and Antitrust Law Enforcement Reform Act.

“Today, consolidation and anti-competitive behavior disadvantage consumers and small businesses across our economy – from agriculture to pharmaceuticals,” Klobuchar told Digiday. “I introduced the Competition and Antitrust Law Enforcement Reform Act to overhaul enforcement, modernize our laws, and build an economy that can compete globally and thrive in the twenty-first century.”

“She’s going to have the chair of the committee. I think her bill will be a jumping off point for a lot of dialog about what antitrust legislation might look like,” said Haidee Schwartz, a former FTC acting deputy director of the bureau of competition and a partner in the antitrust group at Akin, Gump, Strauss, Hauer and Feld.

The bill would give the DOJ and FTC a cash infusion and create a new Market Analysis Division that could help the FTC understand the intricacies of how acquisitions and mergers affect sometimes opaque and complex industry sectors in tech and beyond.

“I think she’s well-respected and she tends to be a person who can put bipartisan coalitions together,” said Barry Pupkin, a senior partner focused on antitrust at law firm Squire Patton Boggs. “She’s got as good a chance as any to get something like this through.”