The New York Times is planning to introduce a dynamic paywall as it moves into the next phase of its subscription business by focusing on improving retention and reducing churn.

During the company’s third-quarter earnings call, CEO Mark Thompson said the publisher had a strong quarter, with more than 3 million digital subscriptions and 4 million subscriptions in all — the biggest gain in digital subs since the Trump bump right after the 2016 election. The growth has come at some cost, though; the average revenue per user decline 1 percent over the year-ago and prior quarter, and decreases in ARPU are expected to continue into the fourth quarter, company execs said.

That pressure mainly came from steep discounting. The Times had a $1-a-week introductory offer in place for six weeks that yielded strong subscription growth but at the expense of revenue. The Times also lowered its meter to four articles a month from five that visitors can read before hitting the paywall.

Thompson said on the call that the Times would be experimenting with introductory pricing; meter count; registration and login; and bundling in the fourth quarter and into 2019. 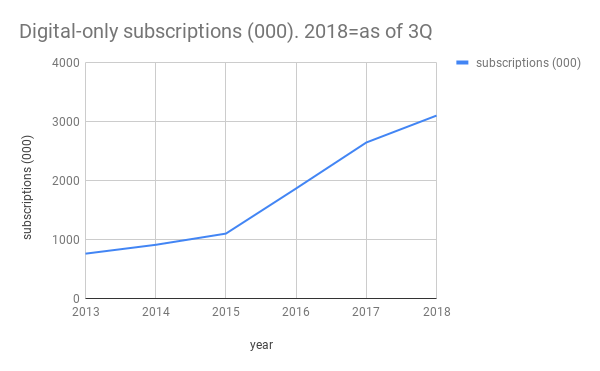 Hannah Yang, svp of consumer revenue at the Times, said the goal of these more sophisticated experiments into how different meter counts impact conversion was to increase signups and subscribers’ lifetime value. Unlike other publishers, the Times isn’t customizing the article level experience at an individual level but will increase the meter level for everyone at once, she told Digiday.

“We get subscribers from all different parts of the engagement funnel,” she said. “We’re sort of in the early stages of figuring out what is the right price for which group and what is the right article limit for the right group.”

The Times belongs to a rarified group of publishers that has a successful consumer business and digital paywall; two-thirds of its revenue now comes from subscriptions. But it’s far from reaching the lofty, 10 million subscriber goal the Times is aiming for. The question looming for all subscription publishers is if there’s a subscription ceiling and where it is. Once the Times signs up its superfans, it have to go to people who are more price-sensitive to a product that can cost $1,000 for seven-day delivery outside the New York market.

That’s where things come in like deep discounts; a reduction in free-article limits; a flexible paywall; and niche products like Cooking ($1.25 a week) and Crossword ($6.95 a month) that accounted for 30 percent of new subs in the third quarter.

The Times still has plenty of runway ahead of it, with two more years of a Trump presidency, a growing educated population and increasing value on news as something worth paying for, media analyst and Times watcher Ken Doctor said. Doctor said the Times is likely seeing price resistance and is looking for ways to reach more price-sensitive cohorts of people with efforts like discounts and a flexible paywall that publishers like The Wall Street Journal and Hearst Newspapers have adopted.

Karl Wells, gm of membership for the Journal, said a dynamic paywall lets the Journal flex the experience depending on where people are in the purchasing funnel, using signals to determine how likely they are to subscribe. He said this flexible paywall has led to significant improvement in the conversion rate.

“In almost a decade of paywalls, the nuance that can be brought to digital subscriptions is far greater than most people have used,” Doctor said. “The idea is, you’re not dealing with one size fits all. You have ways to test their propensity to subscribe based on price, what kind of content they read, how much. You can try all kinds of marketing offers.” Yang said what’s driving the more sophisticated experimentation now is better talent, not a maturation of the subscription pool.

As for the hit in revenue per user, the Times is betting that that will be a short-term hit that is made up over time in subscribers’ lifetime value. It sees its niche subscription products being sold as part of a higher-priced bundle with the news product, which starts at $10 a month.

Lowering the paywall and requiring registration can be a way to crack down on people who skirt the paywall limit by switching devices or browsers and getting them to pay up.

Publishers that clamp down too much to grow subscribers can risk sacrificing the awareness and habit building that’s needed to nurture the next wave of subscribers, though, said Tony Haile, founder of Scroll, a startup that seeks to bundle access to multiple publishers for one price. “The crucial challenge is how to maximize subs at the right paywall level without sacrificing your future audience development,” he said.