Inside China’s triopoly: How Baidu, Tencent and Alibaba dominate the market 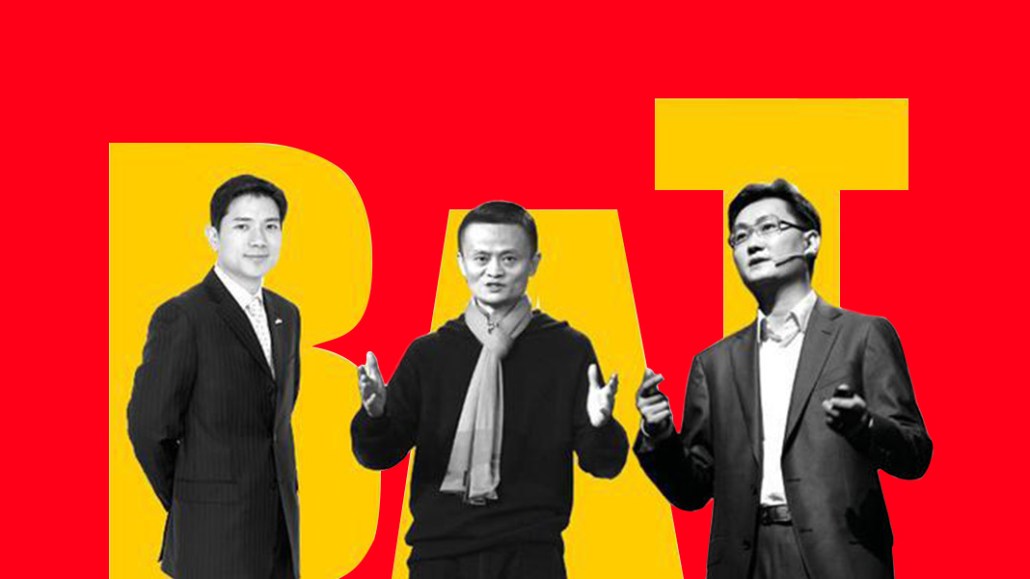 The first thing Yan Lee does when he wakes up is check news and messages on WeChat (owned by Tencent), order a cab on Didi, the Chinese equivalent of Uber, to the office, pay for his ride through Alipay on mobile (owned by Alibaba). Once at work, he uses Baidu to search for information online.

This daily routine of Lee’s, the chief product officer for Hong Kong-based ad tech company iClick Interactive, is not unlike the routines of millions of Chinese professionals every day. That means the three tech conglomerates — Baidu, Alibaba and Tencent — have collected terabytes of information about consumers in the country. They are so dominant in China that they are widely known as “BAT.”

“BAT engage with people at every single point in their life, so they have lots of consumer data and have become the preferred marketing platform for many advertisers,” says Lee.

Alibaba generated around 34 billion yuan ($5 billion) in revenue in the three months through September of last year. Baidu reported about 18 billion yuan ($2.6 billion) and Tencent had 9.9 billion yuan ($1.4 billion) of revenue during the same period. The triopoly represents around 90 percent of the overall programmatic display ad spending in China, with Alibaba alone accounting for around 60 percent, according to eMarketer.

On the sell side, BAT controls the supply chain, too. For instance, in video, Alibaba acquired China’s largest video site Youku Tudou last year for $4 million, while Baidu owns more than 80 percent of iQiyi, another major video streaming platform in China.

On the buy side, the BAT companies have one goal, which is to sell as much of their own inventory as possible, according to Charlie Wang, chief operating officer for programmatic video firm ReachMax. That means each company tries to convince clients to use its full stack: demand-side platform, data management platform and ad exchange that serves as a supply-side platform.

To do this, BAT usually bundle their products together, Wang says. If an advertiser wants to use a BAT company’s data, it will require the company to buy a certain amount of inventory using its DSP or make an annual ad spending commitment.

And BAT companies are very protective of their data, especially Alibaba, which doesn’t offer data to anyone outside of the company, Wang added. But that’s not to say there’s no business opportunity for independent ad tech vendors. The three companies have distinct data segments — Baidu specializes in search, Alibaba in e-commerce, Tencent in social — but they don’t work with each other. If you use Alibaba’s stack, you cannot buy inventory from Tencent, for example.

So there’s a big opportunity for third-party vendors if they can consolidate data from Baidu, Tencent and hopefully, Alibaba. “There’s still space for independent companies,” says iClick’s Lee. “While BAT are strong on their own, marketers need unified reach and a standardized data analysis that goes across the three.”