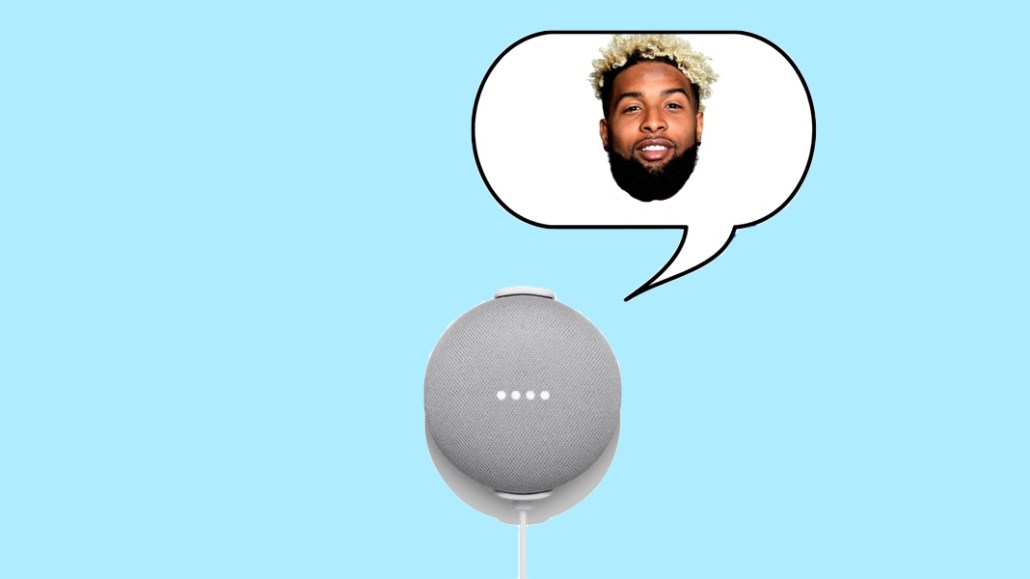 Instead of asking your friends or your cousins who to add to your fantasy football team, CBS Sports would like you to ask your Google Assistant.

The broadcaster has launched a Google Assistant action, a voice-controlled app on Google devices, aimed at fantasy sports fans. The action helps users choose NFL players as they head into fantasy draft season. Starting in October, CBS Fantasy Sports players will also be able to use the action to get score updates, personalized answers to questions about whether or not to pick up players from the waiver wire and evaluate trades. Also for fantasy football players, the ad-supported OTT product CBS Sports HQ on Labor Day will stream a seven-hour fantasy football “telethon” where viewers can call in with questions about who to draft.

To figure out what its action should do, a team at CBS Sportsline, which provides information about betting odds, focused on content that was most popular among fantasy sports players during the NFL season. “We tried to focus in on the real basic questions,” CBS Sports Digital evp and gm Jeff Gerttula said. “We know what the most popular search terms are, and we know what problems they’re solving.”

With monetization on voice activated devices is still a way off, publishers are using them to grow engagement and loyalty-building. CBS Sports’s fantasy audience is already quite loyal. On average, CBS Sports’ fantasy players visit CBS Sports’ site five times more often and view 10 times more pages than non-fantasy players. The broadcaster wouldn’t say how many fantasy sports players it has.

The fantasy sports audience in the United States and Canada has more than doubled over the past decade to more than 59 million in 2017, according to the Fantasy Sports Trade Association, a trade group.

CBS Sports isn’t the first publisher to take a stab at building apps oriented around fantasy sports. Yahoo Sports built a fantasy football Alexa skill in 2016 that allowed users to do things like monitor their scores and track the health of their rosters’ players; daily fantasy brand DraftKings launched an Alexa skill that lets users check how many points players had scored.

More than 50 million voice-powered speaker devices are installed in the United States, with around 70 percent of the voice device market belonging to Amazon, followed by Google with around 24 percent, according to Consumer Intelligence Research Partners.

Personalization is one feature that distinguishes Google’s voice platform from Amazon’s. Over time, the two tech companies are expected to minimize the differences between their platforms.  “In some ways, it’s a race to parity,” said Bret Kinsella, the founder and editor of Voicebot.ai, which monitors the voice space.

Gerttula wouldn’t say how many people he expects to use the action, saying that he is focused more on return usage and how many questions users ask per session. If the action is successful enough, CBS Sports will start marketing the action to people outside diehard fantasy sports fans.