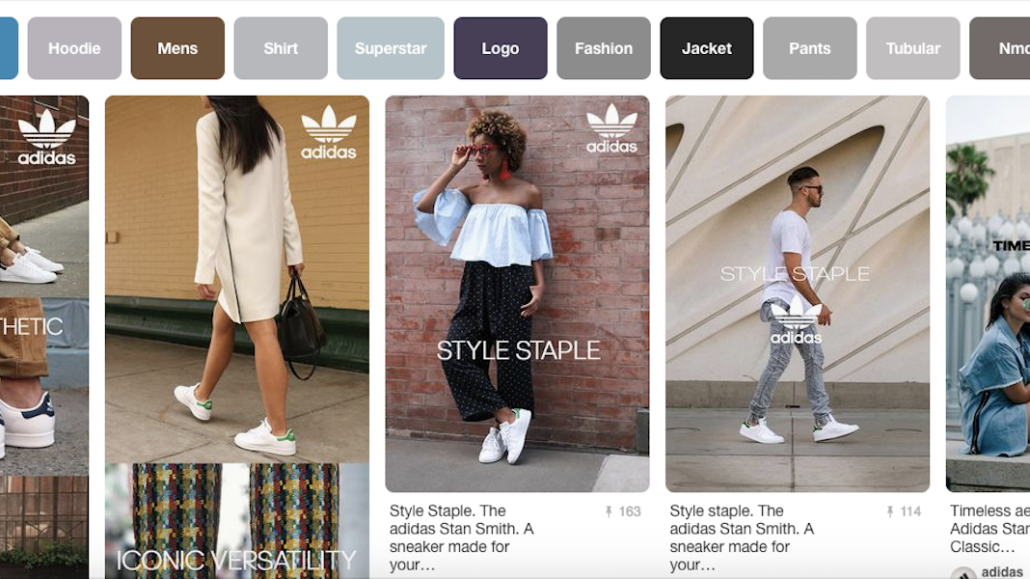 On September 19, Pinterest introduced a self-serve tool for brands that use Promoted Pins. Now, brands can develop campaigns with around 100 members in Pinterest’s creator network, Pin Collective, in as little as 10 to 14 days. Previously, this typically took four to six weeks, according to Pinterest. Brands like Adidas Originals and Old Spice are early adopters.

Here’s how the tool works: Advertisers submit a creative brief and review applications from Pin Collective members who want to work on the project. Once brands select a creator, all communication happens directly in the self-serve system. Pinterest’s 25-person in-house creative team, The Studio, oversees the process to make sure the creative performs as expected. The platform is free and there’s no minimum spend requirement to use it, said Alastair Cotterill, global head of The Studio at Pinterest.

Pinterest worked with Popular Pays, a platform that helps brands work with content creators to build ad campaigns, to create the tool.

“This is not just a self-serve platform for influencers because Pin Collective members are photographers, illustrators, stylists and other types of creative who don’t necessarily have a big following on Pinterest, but they know how to make quality content for Pinterest,” said Cotterill. “Hopefully, this platform can simplify the content creation process and drive advertisers’ desire for Pinterest.”

Running a promoted campaign on Pinterest is a requirement to work with Pin Collective. Pinterest charges for advertising on the platform, but it doesn’t take a cut for content production — the brand negotiates the price with the creator directly and pays Popular Pays a fee on top of that, according to Cotterill.

Pinterest has aggressively expanded its ad offerings over the past year, with new features like visual search and Shop the Look. The network has also impressed marketers with multiple analytics and targeting tools. Pinterest’s self-serve platform for advertisers and Pin Collective also speaks to the larger trend of brands increasingly using influencers like ad agencies.

Michael Dobson, group director of social media for agency Crossmedia, said Pinterest is an interesting platform for brands in the wedding, travel, food and home décor industries where people are seeking inspiration and ideas, and most brands that advertise on Pinterest use Promoted Pins to reach people who are searching for ideas in their category. A self-serve platform will let advertisers connect with more influencers in Pin Collective who are relevant to their businesses, said Dobson.

Chelsea Naftelberg, associate director of content and partnerships for agency Attention, said her team has used Pinterest as a value add in addition to Instagram, YouTube and blogs for larger influencer campaigns, but she hasn’t had clients show interest in promoting influencer posts beyond social stars’ organic followings. “Pinterest has had some really innovative and creative ad integration in the past, and I hope to see that live on,” said Naftelberg, adding that the self-serve platform is a good way for advertisers who want to try out influencer marketing on Pinterest.

“It sounds like it will cut out a lot of the time-consuming research portion of the process with a direct line to the creators who already have active followings on the platform,” she said.

It’s unclear if FTC compliance will be an issue with the self-serve tool. For instance, Adidas Originals tested Pinterest’s self-serve tool in a Promoted Pin campaign last month to raise awareness and highlight the versatility of its classic Stan Smith shoe. The brand paid stylist and photographer Liz Chernett, who has more than 470 followers on Pinterest, to create 12 custom Pins to showcase the sneaker’s iconic style. Adidas Originals didn’t disclose that Chernett created the content.

In response, Pinterest said influencers help develop the creative on behalf of brands, but they are not promoting the content on their own channels — brands work with the influencer and then run Promoted Pin campaigns.