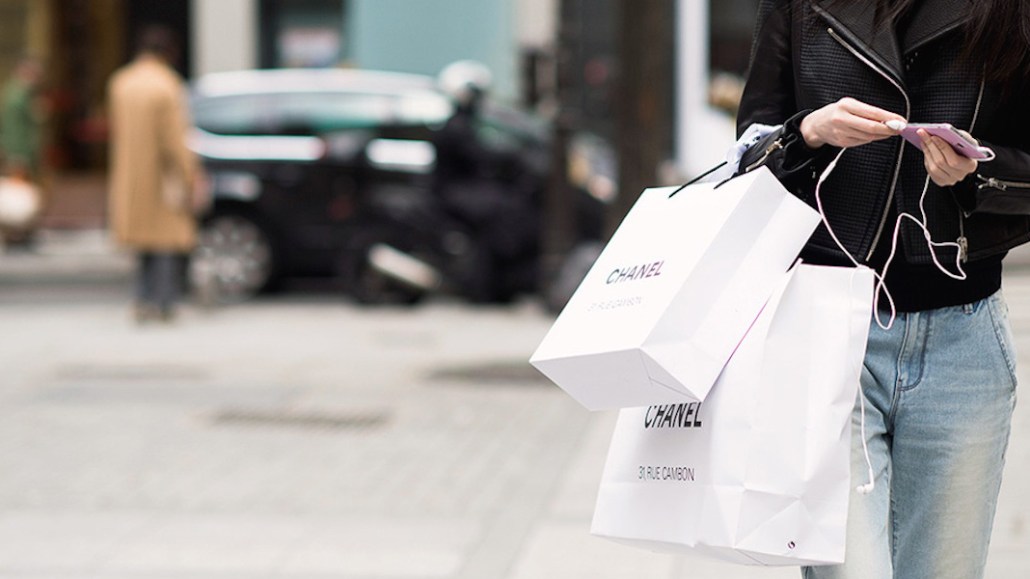 At the Digiday Retail Summit in February in Austin, Texas, we sat down with 53 retail executives to learn about how Amazon affects their businesses. Check out our earlier research on media buyers’ concerns about transparency and ensuring campaign performance here. Learn more about our upcoming events here.

Sales from e-commerce grow, while department store sales decline
2018 has already been a devastating year for retailers. More than 3,800 stores are expected to close in 2018, with companies like Walgreens, Toys R Us and Best Buy announcing plans to shutter failing stores. The number of retailers that sell the majority of their product in department stores has plummeted. Only 19 percent of respondents to the survey from the Digiday Retail Summit say department stores are responsible for the majority of their sales, down from nearly a third of respondents at Digiday’s July retail summit. 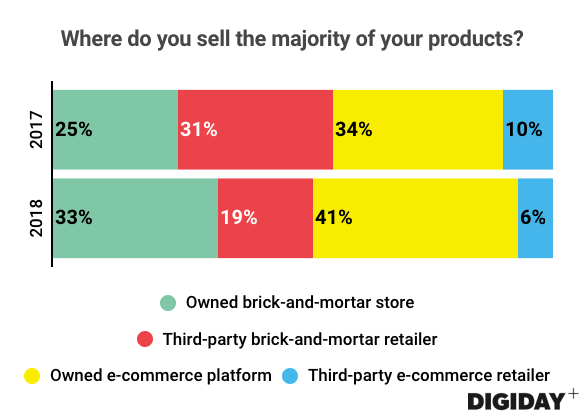 Retailers haven’t abandoned department stores and big-box retailers entirely. Ralph Lauren, for example, still counts on department stores for 69 percent of its profits, despite pulling out of many major department stores’ weakest-performing locations in an effort to protect gross margins and retain its premium image among consumers.

The increase in online shopping has contributed to store closings. E-commerce sales grew 16 percent in 2017, accounting for 8.9 percent of total retail sales compared to 8 percent in 2016, according to the U.S. Department of Commerce. In the Digiday survey from February, 47 percent of retailers did most of their sales through online channels, a slight increase from 44 percent the year prior.

Amazon rightly receives much of the attention when it comes to the growth in online shopping. Amazon alone accounts for 43.5 percent of e-commerce sales in the U.S. But brands are also turning to other third-party e-commerce platforms. Influencers are helping promote American brands on Alibaba’s Taobao platform. Instagram has emerged as an important product discovery platform for brands as it looks to promote online shopping and drive users back to retailers’ owned e-commerce sites.

Digiday’s February survey highlighted the growing importance of owned brick-and-mortar stores, with the percentage of retailers that sold the majority of their products there jumping 8 percent since 2017. Brands like Kering-owned Gucci have reinvested in their stores, creating modern and digital experiences. Remodeling stores increased Gucci store sales by 51 percent, and 80 percent of Gucci’s profits came from its owned stores. Companies like Warby Parker, Casper and Harry’s that initially sold only online have also invested heavily in brick-and-mortar stores.

The decline of major department stores has forced some retailers to pursue multiple revenue sources. Milly invested in both e-commerce and brick-and-mortar stores as it shifted to a direct-to-consumer model. Other designer brands are also moving to a DTC approach as they look to become independent from retail.

Amazon is eating everyone
Companies can’t stop talking about Amazon, worrying about which industry the e-commerce giant will venture into next. Regardless of the industry, respondents to the survey from Digiday’s February summit believe Amazon poses an equal threat to wholesale retailers and vertical retailers. 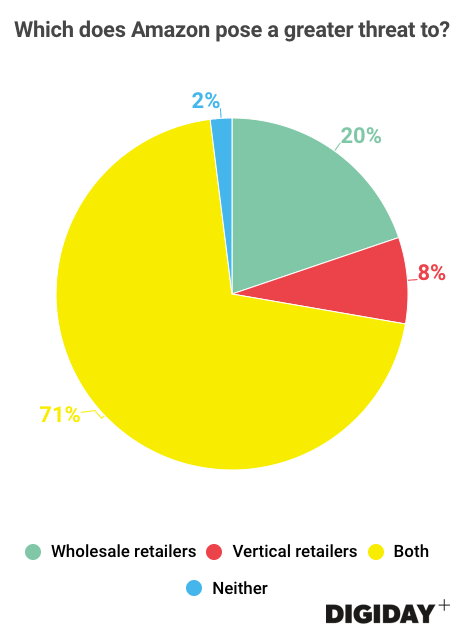 Other vertical retailers need to be wary as well. Amazon might soon no longer need them to sell goods on its platform. The rapid development of Amazon’s private-label business — it now owns trademarks for 41 brands — could be the foundation of an insurmountable wall for retailers if consumers start favoring cheap prices and convenience over brand names.

Wholesalers in particular aren’t thrilled about Amazon. A study of wholesalers by Exact found that 92 percent view Amazon as a competitor. No industry is safe from Amazon, either. Beyond traditional retail, pharmaceutical wholesalers could soon see themselves at risk, as Amazon has received wholesale pharmacy licenses in 12 states. Investors also believe Amazon’s purchase of Whole Foods has made factory-direct wholesaler Costco vulnerable.