Companies are increasingly bringing more of their marketing functions in-house instead of farming them out to agencies. But when it comes to deciding which functions are best internalized, there’s no one-size-fits-all approach. Rather, marketers at different companies say they’re bringing different functions in-house and for varying reasons.

In a survey of 161 client-side marketers by Digiday this past December, respondents were about as equally likely to say their companies were working to in-house programmatic media buying in 2019, at 37 percent, as their creative strategy, at 35 percent.

Meanwhile one-third of respondents said they would in-house their search engine monetization (SEM) and search engine optimization (SEO) work this year. Programmatic buying, creative strategy, and SEO or SEM work operate on opposite sides of the marketing world, yet they will all be brought in-house at similar rates, according to the Digiday survey.

Marketers might be planning to bring various different marketing functions in-house at similar rates, but what they’re doing currently varies significantly. For example, 75 percent of client-side marketers surveyed by Digiday said they’re responsible for some or all of their creative strategy compared to just 29 percent of respondents who said the same about programmatic ad buying.

When it comes down to what marketing functions clients look to bring in-house, there’s no universally accepted roadmap for them to follow. According to Vic Drabicky, CEO of January Digital, an agency that operates as an in-house marketing consultancy for brands, the services marketers attempt to in-house vary by the company, its size and the industry they operate in.

That said, some functions like programmatic buying grab more headlines even though it is being done in-house at rates equal to other services. “Programmatic media buying seems to be the one getting the most attention – it’s also the one with the least transparency in what you are actually getting for your spend,” said Drabicky.

To some degree the trend towards taking programmatic in-house is a reaction to the high-profile press coverage that targeted advertising, ad fraud and brand safety have received in recent years. Marketers that haven’t directly controlled where their media dollars get spent have been burned by ad fraud and by their ads showing up in unexpected places. The Association of National Advertisers report detailing the pervasive practice of kickbacks within media buying didn’t serve as a great ad for agencies’ services, either.

Another reason more attention is paid to in-housing of programmatic media is that advertising agencies often rely on revenue margins from media spend more than they do from services like creative development. So when clients like Bayer, Uber, GlaxoSmithKline or Chase drop agencies for their media spending, it poses a greater threat to the already shaky revenue model of media agencies and holding companies.

But there’s a limit to how many companies will look to take media buying in-house. In order for internal media buying to make monetary sense, companies need to be spending tens-of-millions — if not hundreds-of-millions — of dollars on digital ads for the investment to pay off. For smaller companies, there are fewer savings to be had by doing programmatic in-house. In-house programmatic buying comes with several hidden costs beyond talent like paying for a demand side platform or a data management platform in addition to other ad-serving technologies that can quickly erase any potential savings.

Similarly, when buying “traditional” ads such as TV and print, clients can still benefit from the spending power agencies command. Single companies simply don’t have the leverage to negotiate ad prices the way major media agencies and holding companies do. 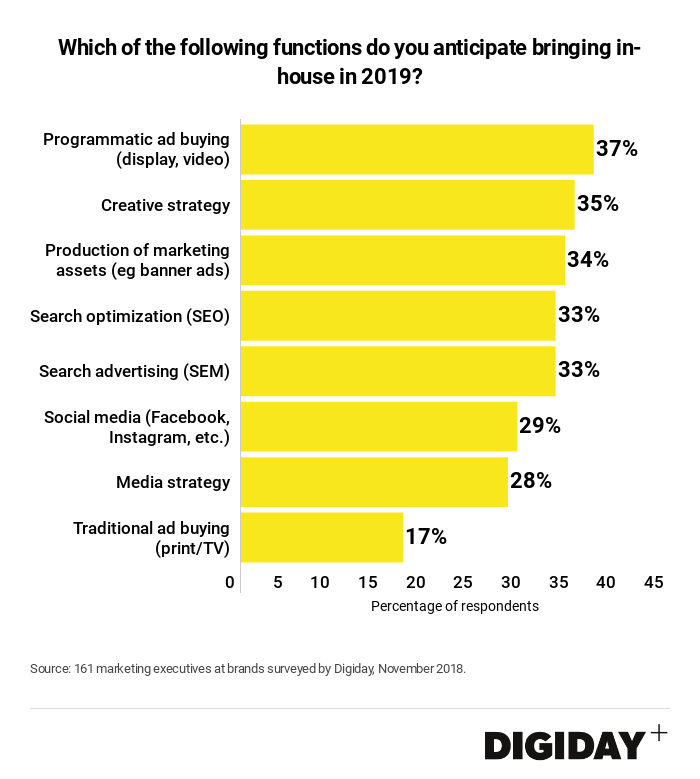 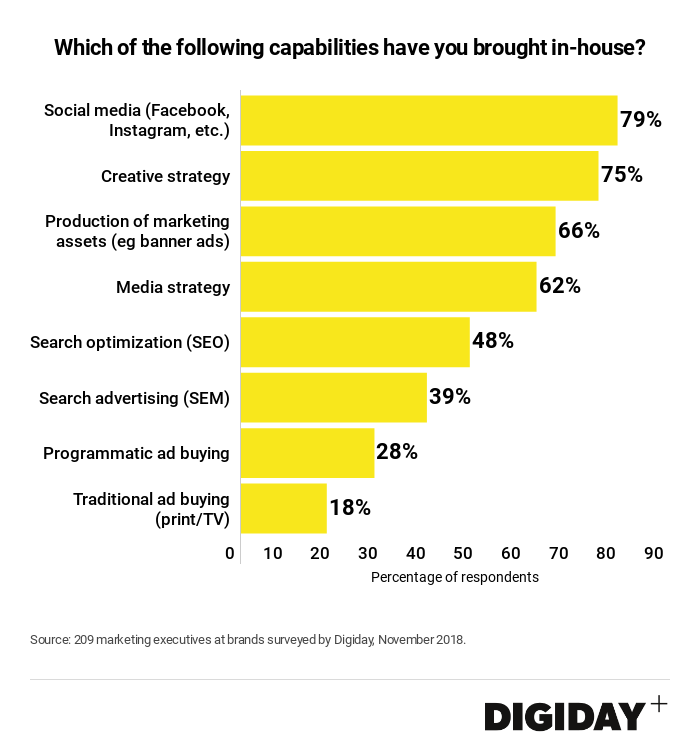 Chobani, which created an in-house creative team, told Digiday that it doesn’t spend enough to make managing its media spend worthwhile. The Clorox company also built an in-house creative agency, but said that owning media buying did not present such a clear value-add. Larger marketers like Vodafone are already walking back plans to bring programmatic in-house as they confront the technical expertise required to pull off media buying.

Instead of looking to take on technically challenging marketing functions, Drabicky noticed that clients had an easier time in-housing work that focused on their brand image. That’s because “things like creative strategy, media strategy, organic social, or other brand-first pieces might be easier extensions of the current in-house team’s skillset,” he said.

Companies including, Experian, Chase, SoFi and Sony Music all operate in-house creative studios. While these in-house teams might not offer the level of savings that in-house media buying can produce in the long-term, they also come with several advantages. Clients are finding in-house teams are able to create campaigns faster than agencies. Additionally internal employees naturally possess a more thorough understanding of the brand’s image than agency employees and are more invested in the success of each campaign.

Clients’ relationship with agencies is changing as many prefer smaller specialized shops rather than traditional agencies-of-record. Part of that is because marketers are in-housing a vast array of marketing responsibilities and are only relying on agencies to plug the gaps that their marketing team do not perform, yet.