‘Home run for us’: Inside Chase’s in-house agency 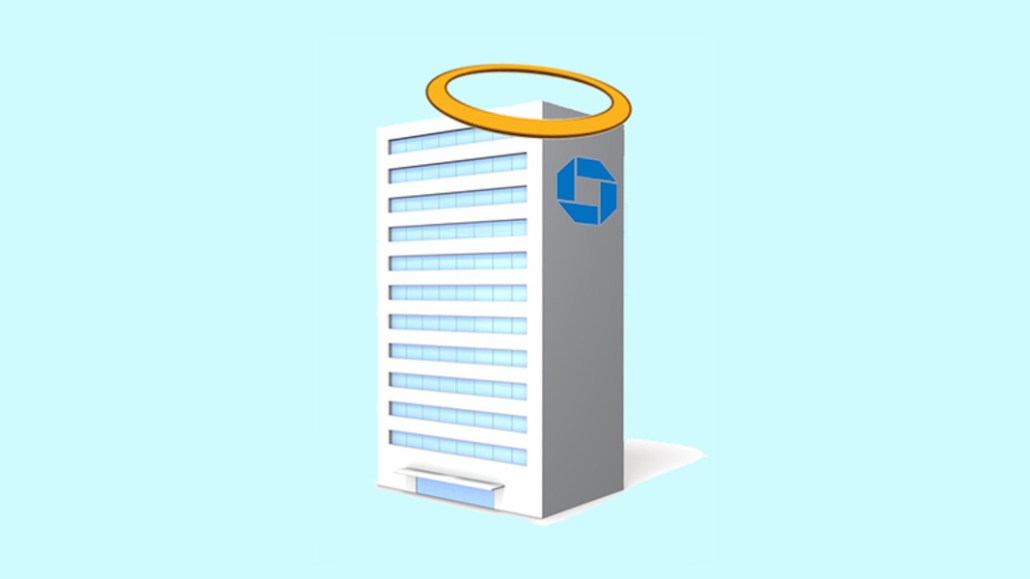 Kristin Lemkau, the chief marketing officer at JPMorgan Chase, prefers a “healthy tension” when it comes to ad agencies. It began in 2015, when the company launched Inner Circle, an internal agency, as part of its marketing department. Inner Circle began with doing mostly creative, but has since expanded to almost every part of marketing for the JP Morgan, Chase and JPMorgan Chase business lines.

Inner Circle’s launch was a major move, leading to a serious decline in JPMorgan Chase’s reliance on external agencies. (The company now works only with Droga5 and VaynerMedia for big brand campaigns and voice, respectively.)

Inner Circle, which is mostly based in Columbus, Ohio, and Wilmington, Delaware, now includes a video production team as well as influencer marketing and corporate partner marketing. Run by chief brand officer Susan Canavari, the agency does the lion’s share of both creative and media for Chase, which spends $5 billion annually on advertising. The company declined to say how many people work at Inner Circle, except to say it’s “growing.”

“We’re stewards of the Chase brand,” said Canavari. “The Chase brand needs to be infused in everything we do, across product development, across creative ideation and across innovation.”

Canavari said the argument for bringing things in-house is simple: Communication channels, especially with the advent of digital, can’t operate in silos. “We need to look at where our customers are, and where are the right places we should intercept them.”

“They have an advantage in terms of real client contact and really understanding products and services,” she added.

Chase made headlines last year when it slashed the number of sites it had ads appear on from 400,000 to 5,000. That number has crept back up, but Lemkau said being able to make those moves, find that they didn’t affect ad performance and figure out a whitelisting approach across platforms that makes sense is something an in-house agency can do much better.

Of course, it’s also cheaper. Canavari said one of the biggest impetuses for Inner Circle was that Chase looked at how much it spent with external agencies and realized it was “a lot.”

Lemkau said she’s taking a hard look at what else the company could do in-house. The key challenge, for her, as for any brand, is weighing that against what agencies, particularly media agencies, bring to the table: Heavy rate discounts and close relationships with key media suppliers.

But Lemkau isn’t convinced a marketer can’t achieve the same results. She said despite rate discounts being used time and time again as evidence of why advertisers should use external agencies, cost savings are never passed on.

“One question I have for agencies — respectfully — is that they are all always talking about the rate discount, which is fine,” Lemkau said. “Then why do I have all these [full-time equivalents] doing media planning for a pre-negotiated rate?” To Chase and Lemkau, the great promise of economies of scale from holding companies isn’t quite working. “What ends up happening is brands keep switching holding companies, and they bring it down to a lower rate by squeezing the media companies,” she said.

Last week, the Interactive Advertising Bureau’s Data Center of Excellence released the results of a new survey that found that 65 percent of brands now completely or partially buy programmatic media in-house. Most of the reasons related to taking back control of strategies and having more control over their data. Of course, cost was also a concern: Marketers said they can reduce costs by doing programmatic themselves.

Other major brands with in-house agencies include Verizon and Pernod Ricard.

Chase was early to embrace the transparency issue in client-agency relationships, conducting what it says was a thorough audit of its media agency, ZenithOptimedia, which got a clean bill of health. Still, soon after that, Chase brought programmatic buying in-house.

One big advantage Chase has is that unlike other companies in industries like consumer packaged goods, it has loads of first-party data and isn’t reliant on data providers. For marketers looking to do more media themselves, that can be a huge boon. Being able to integrate first-party data and control it in their own data management platforms, as well as dictate how it flows over to demand-side platforms for execution is yet another way marketers can assert control and get the most bang for their buck.