‘It’s a work in progress’: How a billboard ad company is going programmatic 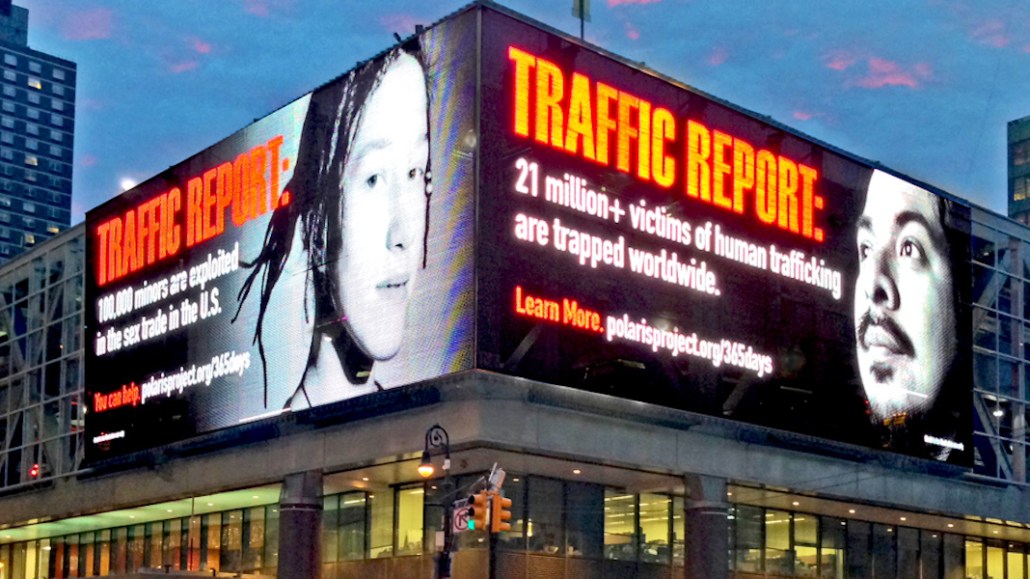 When JetBlue wanted to promote its new credit card recently, it worked with Outfront Media to create a digital billboard located at 1500 Broadway in New York City. The Android-based billboard used the airline’s active flight schedule and the Google Maps API to tell Times Square visitors how fast they could get to various travel destinations from where they were: 38 minutes to John F. Kennedy International Airport, and 3 hours and 37 minutes to San Juan in Puerto Rico, for instance.

This is just one example of how Outfront Media, one of the largest outdoor media owners in the U.S., envisions the future of out-of-home advertising: digital, smart and targeted. As of last December, U.S. out-of-home advertising increased by 3 percent year over year to $7.6 billion, driven by digital sales that were up 14 percent compared to a year prior, according to agency Magna Global. But offering digital boards is just a small piece of building a digital company, said Andy Sriubas, evp for Outfront Media.

“Having a digital company means that we need to sell our media through digital infrastructure,” he said. “We put together a digital plan around two years ago, but it’s a work in progress — our digital transition doesn’t end.”

Moving to digital means building an inventory system, a measurement system and a media-buying system, Sriubas said. To build the digital infrastructure, Outfront Media hired James Price as its svp of data insights and programmatic product two years ago to develop its data management platform and programmatic capabilities. Today, the company has over 79 employees in tech (and a fluctuating number of contractors) who are building a media planning and buying system to let advertisers buy Outfront Media’s inventory on their own, including subway ads, bus ads as well as static and digital billboards.

For instance, if Coca-Cola wants to advertise a new product and target female millennials in New York City and Boston, the brand can log on to Outfront Media’s system to view all the available assets in these two cities: four digital signs in New York City and five static bus ads in Boston, for example. Outfront Media also works with Geopath — a Nielsen-like measurement firm in the out-of-home space — to offer advertisers information about what types of people see their digital boards every day and CPM-based pricing, so they can compare the effectiveness of out-of-home ads with TV commercials. (Typically, out-of-home ads are sold at a flat rate based on time and location, rather than CPM.)

“It’s an end-to-end solution where advertisers can do all the media planning in one dashboard,” said Sriubas. “And now, they have a better sense if they should buy a billboard or a TV ad.”

Outfront Media’s billboard organic revenues were down 1.4 percent to around $224 million during the first three months of this year, according to the company’s earnings report. But it saw increases in both local and digital billboard revenues, said its CFO Donald R. Shassian in the earnings call. Outfront Media built 17 digital boards in the U.S. and six in Canada during this period. Sriubas said the company will continue developing digital board hardware and add 700 digital billboards in Boston over the next 18 months.

Programmatic is another pillar of Outfront Media’s digital transition. The company hasn’t yet worked directly with brands, but it is partnering with ad tech vendors like Videri on programmatic guaranteed and open exchange deals, Price said. “A simple example would be if it’s a rainy day, we will serve digital board A for a brand, and if it doesn’t rain, we will run creative B,” he said.

To make sure its over-700 salespeople in the U.S. are keeping up with the company’s technological changes, Sriubas believes it is important to “set a foundation for digital appreciation” and learn how Facebook, Google and Snap sell media.

Outfront Media is offering this sales training on several levels, with a focus on mobile: A monthly workshop on digital trends, seminars on how to bring digital and out-of-home together and a program called “Outfront Academy” where salespeople can learn from guest speakers. The company also offers mobile certification testing in collaboration with location-based ad tech firm xAd and other vendors.