Unilever has found a way to measure ad data across Google, Facebook and Twitter in a way that doesn’t involve taking that data directly from the walled gardens.

Instead, the data will go to neutral parties in the form of Kantar and Nielsen. Both measurement firms will process and anonymize streams of data to show where money is being wasted on ads on Google, Facebook and Twitter that are repeatedly sent to the same person. Unilever will then take that information from the measurement firms, but at no point will it pull any of the raw data directly from the platforms, said svp of global media Luis Di Como.

The data will show the deduplicated the reach of the ads Unilever buys online, said Di Como.

For this to happen, the platforms would have to share ad exposure data such as reach, frequency, sales and brand equity. That data would then be tied to an anonymized ID to know whether the same person across the three platforms is being bombarded with the same ads. It’s not dependent on the targeting data, which is the source of so much value for the online players, and more focused on advertising analytics, verification and attribution data.

TV data will also be included in the model and will be sourced from existing market measurement tools.

Unilever hopes to have a third-party verification firm eventually audit the results. Doing so has been in the cards since the cross-platform measurement initiative as devised a year ago. “We’ve always said we don’t want media owners we work with marking their homework, and that’s the part of the model we’re developing,” he said.

“Advertisers have struggled to understand deduplicated reach because it’s a siloed process,” said Di Como. “The cross-platform measurement initiative we’re building will allow us to see more clearly the connection between our communications and the outcomes we’re getting when it comes to attribution and sales.”

It’s a setup that suits both Unilever and the media owners for now: Unilever gets a view of sorts of its ads running across three of the biggest online platforms but won’t have to take on the risk of handling more personal data: Google, Facebook and Twitter keep their valuable walled gardens more or less intact, while negating any privacy concerns or threats of data leakage that could have emerged as a result of sharing personal data with advertisers. The fact that imperfect measurement exists between these platforms is actually an advantage as it enables them to keep budgets siloed.

Cross-platform measurement is a long-running struggle for advertisers. Brand safety, ad tech taxes and independent verification have all had moments as the industry’s biggest challenge, but in the end, the issue always comes back to the measurement of effectiveness. The problem isn’t so much that cross-platform measurement can’t be done. Advertisers have been able to build solutions that give them a holistic view of sorts for some time now. It’s that those solutions are expensive and aren’t easily transferable to different markets.

Unilever believes its model is scalable after testing it out in both its developed and developing markets. It will expand to more markets over the coming months in the hope that other advertisers adopt the model, which is why The World Federation of Advertisers will help raise awareness among its members.

“If many advertisers back a model like the one Unilever is developing, then it has the potential to become a standard. Working with a common currency is good for the buy side, and it’s also good for the sell-side” said Robert Dreblow, global head of marketing services at the WFA. “Brands don’t want to have to reinvent the measurement wheel in every different market and for every different platform. It becomes expensive, and it’s a logistical nightmare.” 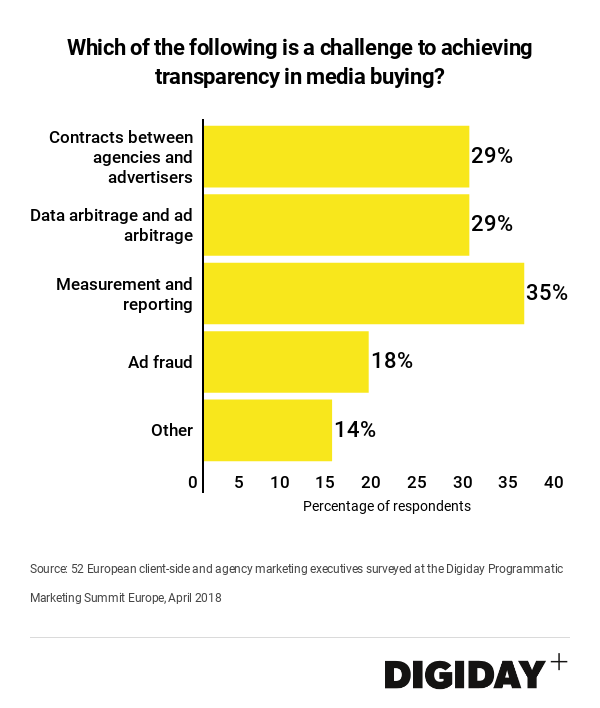 “Advertisers are wasting money over-serving ads because there isn’t the framework or measurement in place to recognize when you’re doing it,” said Direct Line Group’s marketing director, Mark Evans, at an event hosted by the Advertising Association in London last week. “If we can put better measurement in place and serve the right number of ads, then its win-win for everyone in the ecosystem.”