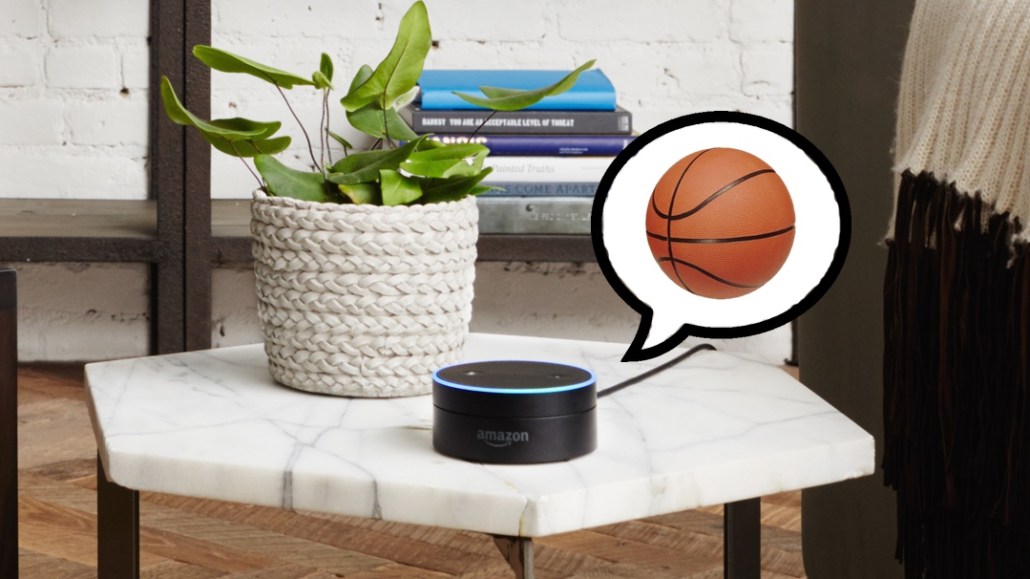 Turner Sports put the biggest basketball tournament of the year on Amazon Alexa devices. But not for the reason you’d think.

The voice-enabled skill, which is already available on Amazon devices, will give users access to the NCAA Men’s Basketball Tournament schedule, live score updates and streams of the games’ radio broadcasts from Westwood One when the Madness begins next week. But the real reason Turner moved into voice will come into play next year, when Alexa device users can order Alexa to turn the game on on a nearby TV.

“The most immediate ROI is certainly launching video in a connected home,” said Hania Poole, the vp/gm of NCAA Digital.

Turner’s skill is not the only option for Alexa users looking to stream the tournament’s radio broadcasts — digital audio startup TuneIn, which has offered streams of Westwood One radio stations since 2013, also offers them via Alexa.

But it is the most robust: Instead of having to look up which Westwood One station is airing which game, users can simply ask for it by name.

They can also ask for it in a casual way: Instead of requesting the score in the University of North Carolina Tarheels college basketball game, users can ask Alexa what’s going on in the UNC game, or the Carolina game, or the Tarheels game. While the tournament brackets won’t be set until Sunday, Poole said multiple school nicknames and terms will be recognized for each of the tourney entrants before tipoff.

The current incarnation of this skill is part of NCAA Digital’s push to be where everyone is. But next year, Poole expects it will also help Turner Sports grow revenues by increasing video streams or traditional TV ratings, which are both big business: CBS and Turner, which hauled in a combined $1.2 billion in national TV advertising revenue last year, according to Kantar Media data.

Digital ads sold against the games fetched less than that, but fans watched an awful lot of the tournament in streaming form: 18.1 million hours last year. But that number hasn’t grown much. Fans streamed 17.8 million hours in 2015, and Poole has had trouble projecting how that number might grow. “Last year I came up with all these projections, and none of it panned out,” she said.

One key factor that could be affecting that growth: the requirement that viewers authenticate their cable subscriptions to get access to the tournament games.

Turner’s move onto Alexa brings the number of digital platforms offering March Madness games to 15, joining mobile device operating systems from Apple, Android and Windows, OTT video providers including Roku, Apple TV and Chromecast, the video game console Xbox (also added this year), and Apple Watch, among others. Fans can use those platforms, plus desktop computers, to access all the games, whether they’re broadcast on CBS, TBS, TNT or truTV.

There is no Google Home service for the games. Google Home’s services (their equivalent of Alexa skills), come with some measure of exclusivity, which would have been a bad look for the NCAA, which has a corporate partnership with Amazon.