‘Playing defense’: Allied or not, news orgs face uphill battle against the duopoly 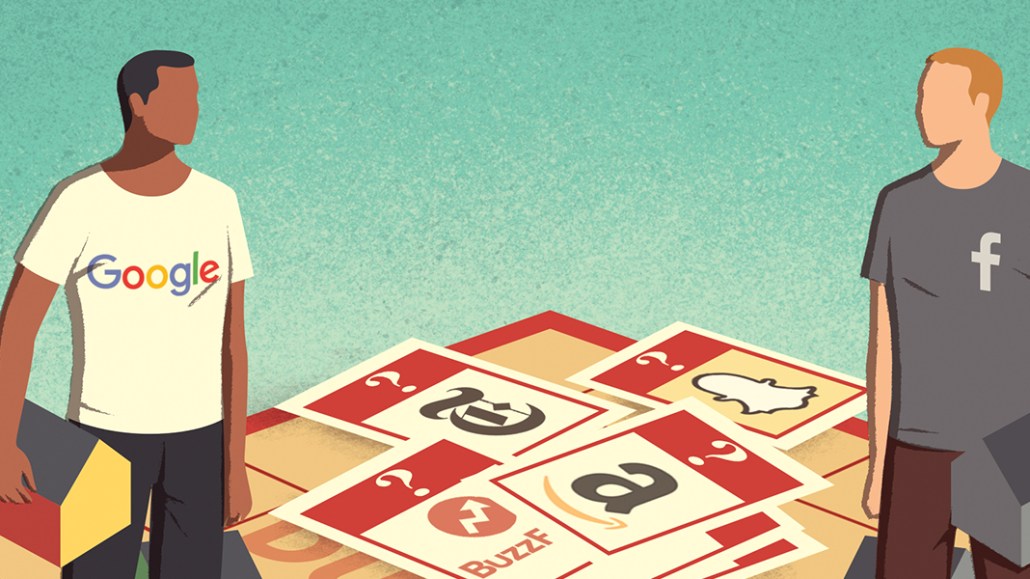 The media industry backlash to Facebook and Google has taken a number of forms. Now the News Media Alliance, the newspaper trade association, is trying another tack, leading an effort to try to bargain with the duopoly for better terms around data, ad revenue and subscription offerings.

“There are more people that are consuming our news content than ever,” said David Chavern, president and CEO of the alliance, who laid out his proposal in a Wall Street Journal op-ed. “There’s a distribution system that gets lots of news out to people. But that system doesn’t provide terms that are going to sustain the business.”

You can look at the effort as a sign that the news industry is finally getting its act together. Or you can see it as an industry in decline that has never been able to solve its own product and business model problems — and is now looking to the government to help save it.

There are practical issues, though. Chavern himself admits the goal of getting an exemption to negotiate collectively with the platform giants is a long shot. The closest precedent is when book publishers and Apple tried to unite in 2010 to fend off Amazon’s dominance, and the government smacked them down. And the Republican-dominated legislature isn’t exactly pro-press these days.

“Obviously, this is a difficult environment for any legislation, but trying is better than not trying at all,” he conceded.

Alliances within the news industry have a mixed history. Online trade associations like the Interactive Advertising Bureau and Digital Content Next have helped establish standards in an emerging industry and advocate for online publishers, said Dave Morgan, a former First Amendment lawyer and current CEO and founder of performance TV company Simulmedia. Others like Classified Ventures, a classified online market that was co-owned by several publishers including Tribune Media, McClatchy and Gannett, worked because it was narrowly focused on one segment of the business. Alliances that try to protect a disrupted market don’t fare well, Morgan said.

“Most consortia are about circling the wagons,” he said. “They’re playing defense.”

Others have had execution problems. Pangaea, the programmatic alliance formed in 2015 that includes the Guardian, CNN International and the Financial Times, hasn’t gained traction because personnel kept changing and publishers were still selling their own inventory, among other issues.

TrustX, a premium digital ad marketplace led by Digital Content Next, hopes to do better by meeting advertisers’ need for scale, simplicity and brand safety. To avoid conflicts of multiple stakeholders, TrustX was set up as a wholly owned subsidiary that’s not owned or controlled by DCN’s members. TrustX launched in May and of DCN’s members that sell ads programmatically, about half (33) have committed to putting inventory in TrustX, with about 12 more on the way.

“All the major holding companies, all their trading desks and the plurality of the premium publishing community is either in or waiting to get in because of universal agreement that there’s a problem that needs to be solved and there’s an alliance that’s focused on that solution,” said David Kohl, president and CEO of TrustX.

Then, there’s the cautionary tale of Spain, where the “Google tax” on news aggregators led Google News to shut down in the country, with disastrous traffic effects for publishers there.

Chavern said he envisions a scenario in which a group of publishers representing a cross-section of the alliance’s members lead the negotiations with the duopoly. The diverse makeup of the alliance itself makes it hard to see how collaboration could happen, though. The trade group has 2,000 members in the U.S. and Canada, ranging from local community papers all the way up to giants like the Journal.

“Their businesses are so different, and their needs are so different,” said one former newspaper exec who’s dealt with the trade group. “Getting all them to jell is very hard to do. I think herding cats is easier.”

Chavern said he’s just focusing on his members; they pay him, after all. But the news ecosystem is far more diverse than just the alliance’s members, and it seems strange to launch an initiative without including digital-native publishers and broadcasters.

There’s also a question of how much leverage the news industry even has with the platform giants in the first place. Reports from Pew Research Center and Reuters Institute for the Study of Journalism tend to generate headlines about the rise of social media as a place where people are getting their news, but according to Pew, only 18 percent do so often. So while a fair number of publishers may get an outsize amount of their traffic from Facebook, that’s not the same as the publishers’ content being critical to Facebook. Last year, Facebook seemed to say otherwise when it tweaked its algorithm to dial up friends and family content in the News Feed and deprioritize news content.

Publishers and their efforts would be better spent trying to grow a revenue stream outside advertising, said Tony Haile, former Chartbeat CEO and now CEO of startup subscription service Scroll.

“Data’s table stakes, and platforms aren’t going to share their crown jewels, no matter how much publishers ask for it,” Haile said. “The other legs of the tripod are scale and simplicity of purchase, and I don’t think seeking this kind of collective bargaining is doing anything that moves things closer to being a more attractive proposition to their customers.”

https://digiday.com/?p=245128
Most Read
Trending in Publishing in the Platform Era
Digiday Top Stories