‘Life is not fair’: How Salon regrouped after Facebook decimated its traffic

Many publishers have wrung their hands over being at the mercy of Facebook’s algorithm changes. Rarely are the details made public, though. As a public company, Salon Media Group has to report its financial results.

In its most recent full-year fiscal results, published on June 23, it disclosed its revenue fell 34 percent to $4.6 million year over year and traffic dropped 23 percent, declines it pinned on the twin forces facing media: Facebook and programmatic advertising.

How it dealt with the blow from Facebook sheds light on the risks publishers face as they grow increasingly dependent on algorithms outside their control.

Jordan Hoffner had been CEO of Salon for just a month when Facebook announced it would alter its algorithm to favor posts from users’ friends and family over publishers’ posts in June 2016. Before then, Facebook was doing well for Salon, said Annemarie Dooling, a former community manager at Salon. “We were putting extra work into figuring out how to moderate better and make it a safe space,” she said. “There was a lot of political debate.” Salon was getting about one-fourth of its visits from the platform and roughly one-third each coming from search and direct traffic. But that was enough to ding its traffic significantly, according to the company.

Salon’s average monthly traffic fell 23 percent to 12.7 million uniques for the full year, versus 16.6 million the year before, even as other publishers were seeing their traffic soar on Trump news. The low point was September, when the site had 9.6 million uniques. 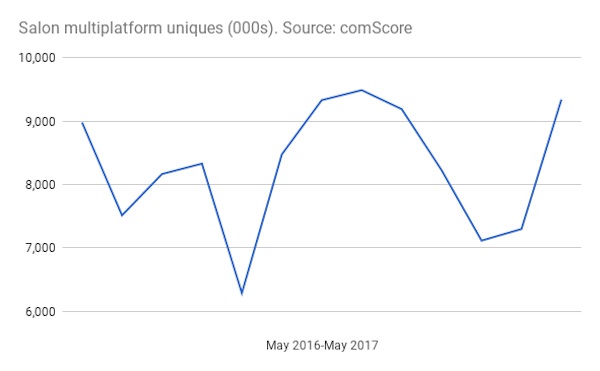 “It was pretty dramatic,” said Hoffner. “But at the end of the day, what are you going to do? … Life is not fair. Being entitled is not going to get you anywhere.”

Hoffner was brought on to replace Cindy Jeffers and bring the struggling progressive news and commentary site to profitability. Salon had the added pressure of being a single-title company that’s publicly traded. As a vet of Google and YouTube as well as a former NBC News producer, Hoffner said he wasn’t a stranger to the thinking at platforms.

“I come from a platform, so I understand what Facebook is trying to do,” he said. “Generally speaking, and it’s not limited to social media, if you’re running a business, you have to be very careful about building your business on top of other platforms. At the end of the day, something can happen that’s out of your control.”

Like a lot of publishers at the time, Salon started wading into Facebook Live and on-demand video. This played into Hoffner’s strengths, as he has a TV and video background. Salon posts a live video every weekday, often an interview with a celebrity or politician, which Hoffner said has helped Salon grow traffic on Facebook. But there’s no monetization there yet. So at the same time, he put more resources behind video, building a video team of six. Text is still Salon’s backbone, with about 45 pieces a day, but Salon now also produces four to six videos a day, often featuring its writers interviewing newsmakers, and increasingly, mini documentaries. Salon has been shifting its revenue focus to programmatic because as a small site, it’s hard to sell direct and native advertising, and it can sell more programmatic with fewer staffers. The video effort has helped improve programmatic pre-roll ad rates by 25 percent over the past year.

Video also has helped traffic, according to Hoffner. ComScore shows traffic has resurged to 9.3 million in May, up 4 percent year over year, which Hoffner attributes to videos with big names like Anthony Bourdain, John Lithgow and Jill Stein.

When Hoffner arrived, staffers were concerned that he’d water down its progressive bent and cut staffers to boost the company’s performance. Under Hoffner, Salon has cut staff to 40, down from 51, and it’s lost several high-profile writers. (Hoffner said he’s replaced most of them, with hires including Matthew Sheffield, Gabriel Bell and Alli Joseph and while edit is down two from its previous level, he has the budget to hire more). Salon is posting more images and polls on Facebook, the sort of content the algorithm wants. But Hoffner, who’s also filling in as Salon’s acting editor-in-chief since Dave Daley’s departure in June last year, insists Facebook isn’t driving the editorial strategy and that the fundamental editorial approach is unchanged.

“It’s one of probably 10 data points we look at,” he said of Salon’s performance on Facebook. “The question is, what is it that we’re best at covering, what kinds of angles can we provide that are interesting and how do you best distribute that.”

https://digiday.com/?p=243519
Most Read
Trending in Publishing in the Platform Era
Digiday Top Stories