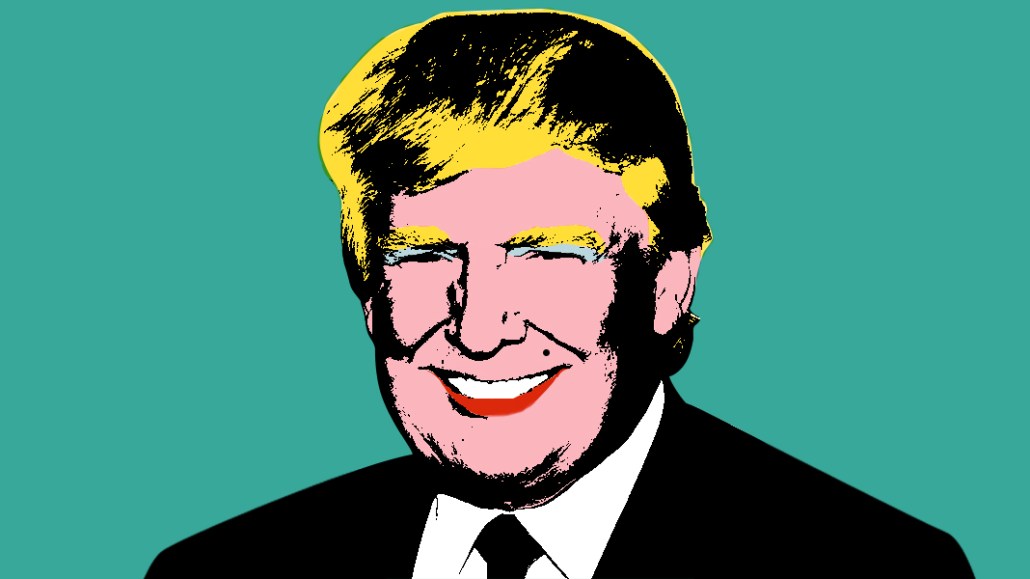 In December, Teen Vogue writer Lauren Duca wrote a scathing opinion column about Donald Trump, “Donald Trump Is Gaslighting America” that went viral. Millennial-aimed sites Bustle and Mic are using new funding in part to build their politics coverage. The New Yorker is looking for writers who can flow between the worlds of politics and culture.

Politics and pop culture have long been intertwined, but it’s true more than ever in the era of Trump. As such, publications of all editorial stripes are capitalizing on audiences’ interest, deploying more staffers to capitalize on readers’ interest in the Trump election and its aftermath. Data from Chartbeat, which measures article production and consumption across online publishers, found that across a sample of thousands of publishers, there was a rise in both political coverage and readership (see chart below).

“Politics is dominating the conversation in a way we haven’t seen for a long time,” Bustle editor Kate Ward said. “Pretty much everyone wants to talk about it on a daily basis.”

The increased coverage has been good for audience growth, particularly at women’s sites, with traditionally women’s issues dominating the news. Traffic to Cosmopolitan’s politics vertical tripled from March to November, a period when traffic to the site overall was flat. “We have absolutely seen an unprecedented interest in political stories from our readers in the past six to 18 months,” said Kate Lewis, digital editorial director at parent Hearst, which has enlisted political columnists at Cosmo and Elle to augment Esquire’s longstanding coverage. 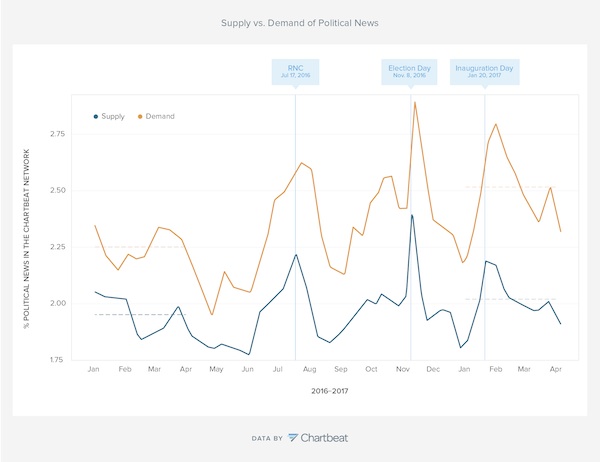 News stalwarts are seeing a bump, too. The Daily Beast has seen a 120 percent increase in audience since 2012. Half The New Yorker’s top 10 stories in the first quarter were about politics. In addition to traffic gains, interest in Trump coverage is spurring subscription sales at The New York Times, The New Yorker, Slate and other publications.

Jed Hartman, CRO of The Washington Post, said the current climate recalls the early dot-com boom days when, “If you walked into a sports bar, CNBC would be on the big screens rather than ESPN. The same thing seems to be happening with politics right now. Everyone is focused on it.” This is due, in no small part, Hartman said, to Trump’s status as America’s first reality-star president.

The Obama effect
The blurring of politics and pop culture has actually been underway for years. Starting with Joanna Coles, who was editor in chief from 2012 to 2016, Cosmopolitan has dived into politics and started endorsing political candidates. News was part of women’s-interest site Bustle’s mandate when it launched in 2013. Entertainment magazines have covered celebrities as political activists. Rolling Stone and yes, Playboy, have always blended political with culture and entertainment.

The Obamas set the stage for the surge in interest in Trump, said Bonnie Fuller, president and editor in chief of HollywoodLife.com. “They understood that to connect with average Americans, they had to use pop culture. They took it to a new level. Then along comes Donald Trump, who was a real reality TV star and real estate impresario. He played his whole campaign like he was promoting a TV show. It’s part of the mix of celebrity and pop culture news. Political news is pop culture news.”

“HollywoodLife kind of broke the story that she was going to run for president,” Fuller said. “We broke a story that she took office space on 46th Street off Sixth Avenue and the word around the building was that it was going to be her campaign headquarters. Her team denied it at the time and of course she did, and we were right.”

Others might dispute the site’s place in the annals of U.S. political coverage, but there’s no doubt that since then, politics has become a daily staple of HollywoodLife. “Some of those stories do as well as traditional entertainment stories,” Fuller said. “It’s kept the site healthy.”

The business risk
What’s good for audience growth isn’t necessarily good for the business side, though. Many advertisers, particularly the ones with the biggest budgets, have grown increasingly skittish about their ads being placed near political news. It’s hard to convince them that even if they routinely advertise on news stalwarts like CNN, that it’s no different being in a lifestyle publication that’s covering politics more, said John Wagner, group director of published media at PHD.

“You have some advertisers that are cool with pretty much anything and you have some with strict ad guidelines,” Wagner said. “It’s important that you serve the reader, but your advertiser pool might shrink a little bit.”

Still, even if publications say they haven’t gotten any pushback from advertisers, there are other concerns. News is competitive, and publishers can risk sounding off-key or distracting from their focus if they pile on without a point of difference. “It’s a question of capacity,” said Indira Lakshmanan, who writes about ethics at Poynter. “Do they have the knowledge basis to cover politics along with beauty or fashion or what their speciality is?”

Wary of normalizing
Hearst almost got taken in by a fake news story, and has to be careful how to hit the right note on its sites that are better known for fashion and lifestyle coverage and not “gushing over trivial things,” Lewis said. “I am sensitive to concerns that the press can normalize things that we should give more thought to,” she added.

Another cautionary tale is Mashable, which expanded from its social and tech roots into news in the quest for audience growth, only to retreat a few years later. For sites like LittleThings, which traffics in feel-good fare that spreads on Facebook, politics remains a no-go zone. In fact, it makes that promise to advertisers.

Publications that over-hire may find themselves in the same boat. Already, Chartbeat found that demand for political news has waned since February.

And more political coverage doesn’t necessarily solve the political polarization that the election brought into full relief. A Chartbeat study found that people tend to ignore the news they don’t agree with. A separate Chartbeat study found that left- and right-leaning sites cover the news differently. More politics coverage isn’t necessarily going to change that, although lifestyle sites that start covering politics more could potentially introduce more people to politics for the first time.

It depends how it’s done, said John Avlon, editor in chief and managing director of The Daily Beast. Sites shouldn’t be predictable or preach to the choir in their coverage, but the more journalists can get people interested in hard news, via a mashup of Hollywood and politics that he calls “Pollywood,” the better. “Part of our responsibility is to make important stories interesting,” he said. “If more places are finding politics a subject of pop culture fascination, that’s great for the country at large.”

The New Yorker sees another risk of going overboard on politics coverage. It wants to be more of a first read for politics, but is conscious of not ignoring the culture reporting that’s also core to the brand. “It’s a constant balancing act,” New Yorker digital editor Michael Luo said. “We don’t want our culture coverage to get lost. And I think people are seeking relief from the politics coverage.”