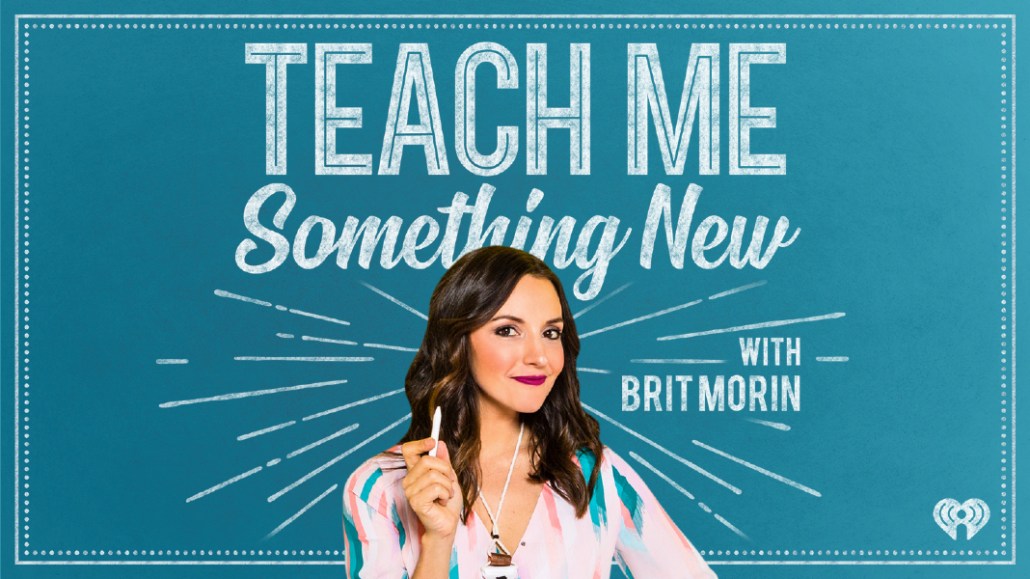 In the last quarter of 2019, the lifestyle publisher Brit + Co was profitable and its founder, Brit Morin, expects this year to be the same. Morin wants to reestablish itself as a go-to source for female-focused “how-to” content by orienting its editorial strategy around a new educational podcast.

It will try to get there with a firm focus on search traffic, diversified sources of ad revenue, and a drastically smaller team.

Morin started reducing its staff following what she called a strategic shift, driven by platforms’ algorithm changes, in 2017. Brit + Co laid about a dozen people off in 2018, let several more leave through attrition, then laid off most of its remaining staff in the spring of 2019. Morin said that today, around 30 people work on the site, but would not say how many are full-time employees.

After reducing and restructuring the remaining staff, SEO became the focus, because the site’s evergreen content, which aims to solve “how to” search queries, was already suited for search.

“‘How to’ search queries have always been the most popular on Google,” said Morin, adding that this knowledge influenced her editorial strategy when she was creating her site.

In the first quarter of 2017, Facebook referrals accounted for 40% of all traffic to the site, according to the company’s Google analytics. Now, Facebook and Pinterest together account for approximately 15% to 20% of site traffic depending on the month, while Google referrals have increased from 22% to approximately 75% over the same period. From 2018 to 2019, Brit.Co’s average unique monthly visitors decreased by 16% from 4.8 million to 4 million, according to Comscore.

Outside of direct sales, the company paired evergreen content with programmatic advertising, which has taken the company’s revenue per 1,000 pageviews (RPM) from what was essentially zero to $10, according to Brit + Co president Jill Braff. Advertising still accounts for the majority of its overall revenue — approximately two-thirds, with programmatic accounting for one-quarter to one-third of the advertising business, she said. The rest of the advertising revenue comes from direct-sold display ads, event sponsorships and some branded content.

In an interview on the Digiday podcast in 2018, Morin said she hoped that by this year, there would be a 50-50 split between advertising and consumer revenue. One of the ways that Morin said they’re hoping to increase consumer revenues is by launching a new membership model at some point during the year, though she declined to share a timeline on that.

In order to offset the Facebook drop off and strengthen its search ranking, Brit + Co also leaned into optimizing Pinterest.

Both Morin’s and Brit + Co’s Pinterest pages draw over 10 million monthly viewers, according to their Pinterest profiles, meaning that they had a strong audience, but just needed to optimize the click-throughs to the site. To do this, Morin said her team added more keywords to pins as well as placed more content within the copy of the pins themselves, such as placing more of the recipe in the description box. She said this enabled better engagement performance on the pins, which also yielded better performance on search due to Google sourcing the pins within search results.

Brit + Co will work to enhance the site’s SEO standing even further by publishing content focused on one topic per week across all of its platforms.

That topic will be determined by its new podcast, “Teach Me Something New with Brit Morin,” where each 60-minute-long episode will feature a person at the top of their field who can talk about a related skill or subject. All of the digital content across its subject verticals will tie into the subject and the company’s e-learning and e-commerce businesses will also highlight online classes and products that fit within the topic.

The goal will be to take a cross platform approach to selling advertising now, said Braff, with an emphasis on the new platforms that the brand is launching, including the podcast. “It’s not about buying our website as much as it is about buying touch points across our networks,” she said.

Because Brit + Co will be switching topics from week to week, it will be important for the publisher’s sales team to focus on the host and Morin’s values when pitching to potential advertisers, said Sean King, evp at Veritone One.

However, if Brit + Co is able to maintain its weekly audience and framework the topic doesn’t so much matter. It’s more about the brand safety of having the loyal and returning audience, King said.