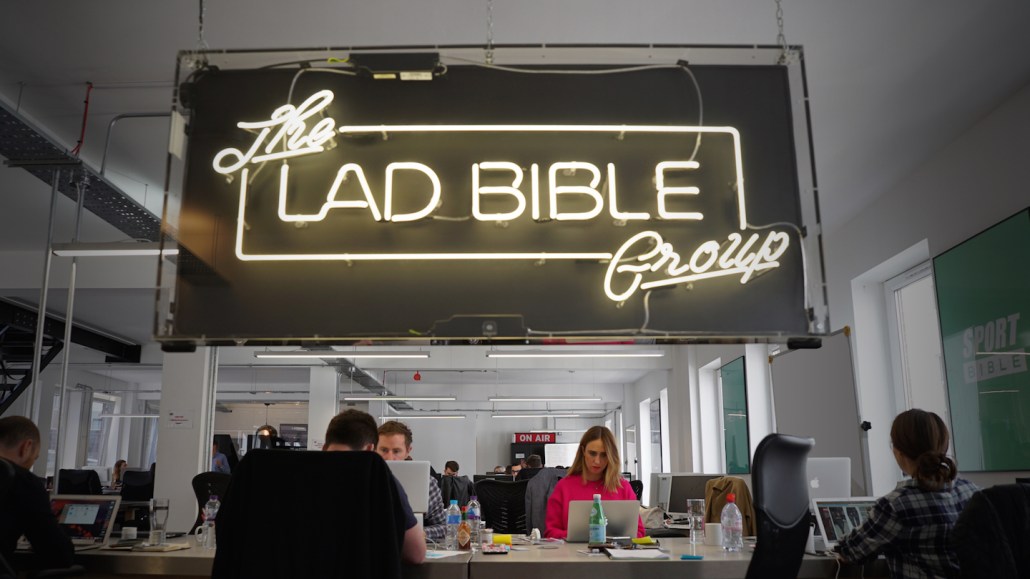 Ladbible’s content is not for everyone. Alongside original stories about the environmental impacts of plastic in our oceans and Dame Judi Dench rapping, there’s also content like a viral photo of a footballer’s bald patch resembling a penis right next to “Tinder Poo Date Girls Speaks Out and Gives Herself a New Nickname.” This might be the type of fare a straitlaced brand would find, well, problematic. To allay such concerns. Ladbible has introduced a content-ranking system so nervous advertisers can choose to appear next to PG content.

The media company has borrowed from the British film industry rating system, so its content is ranked as U, PG, 12, 15 and 18, based on predefined guidelines chosen by Ladbible. Content with mild references to nudity will fall under 12 or 15, whereas content with heavy references to drugs and alcohol falls under the 18 category, for instance. Authors manually tag stories in the content-management system before they are published. For breaking news stories about natural disasters or terrorist attacks, Ladbible has chosen to turn off display ads completely, a feature adopted by some news publishers.

Private marketplaces and open exchanges detect the content ratings, so agencies can block any level of content they don’t want client ads to appear beside. While there are a number of tech solutions that filter unsafe content automatically using values like keywords, Ladbible’s writers know the content from the start, according to publisher Sam Oakley. He added that 90 percent of Ladbible’s content falls into the PG category. Last year, this would have been closer to 60 percent, according to the company.

“We want to be as inclusive as possible, and at the risky end of the spectrum, you start losing the audience,” he said. “Our writers naturally bring themselves into that 12 rating.”

However, there will always be some brands who want to be associated with content geared toward adults: A recent article on the effects of MDMA on the body has featured ads for the games FIFA 18 and World of Warships.

The ratings were introduced in the aftermath of the terrorist attacks in Manchester, England, in June this year, rather than due to requests from agencies or advertisers, according to the publisher.

Cleaning up its content through hiring heavyweight journalists has helped attract and retain brand ad dollars, but Ladbible needs to balance this with creating more risky content for its core demographic.

Ladbible’s editorial staff is becoming more discerning in what stories it writes compared to a year ago, according to Oakley. “They know they don’t have to pick the lowest common denominator story. They could put out more clickbait topics and double traffic, but we are trying to get quality as well,” he said, but he noted that doesn’t mean there isn’t a lot of internal debate about what content it covers as it forges its path ahead. “There’s positive tension in the business between the hardcore editorial guys and the social team, who have more traffic targets.”

While Ladbible couldn’t break out business impacts as a direct result of implementing more brand-safe checks and balances, it’s attracting mass-market brands like Unilever, Nike and Disney, along with repeat business from brands like Netflix and the RNLI. Ladbible works on roughly a dozen campaigns at any given time, and the number of brands it has worked with has more than doubled since last year, according to the company.

“We’re laying the foundations and making the product as strong as possible,” said co-founder Arian Kalantari. “With strong products that get the performance for brands in viewability and brand safety, the value will increase, but we’re nowhere near perfect yet.”

The company is growing at a rapid pace: Last week, The Sunday Times named Ladbible the U.K.’s ninth-fastest-growing company, with 208 percent annual sales growth and £9.2 million ($12.4 million) in sales for 2016. Revenue comes from branded content, programmatic and licensing, roughly in equal parts.

The company has about 140 employees, with 75 across editorial, tech and data science in Manchester and branded-content and commercial teams in London. The programmatic team doubled to six people in the last year. Joyride, Ladbible’s branded-content agency, launched officially last December with 12 employees. By the end of the year, Kalantari expects the team to double to 24.

Ladbible has also aligned itself with social causes as the company has matured. Working with the Plastic Oceans Foundation, last week it launched an ongoing campaign, “Trash Isles,” in which it will lobby the United Nations to recognize the amount of plastic washed into the ocean as a country in its own right, requiring other countries to take responsibility for clearing it. Last year, Ladbible ran a similar ongoing campaign around mental health after learning its audience is interested in mental health, politics and the environment.