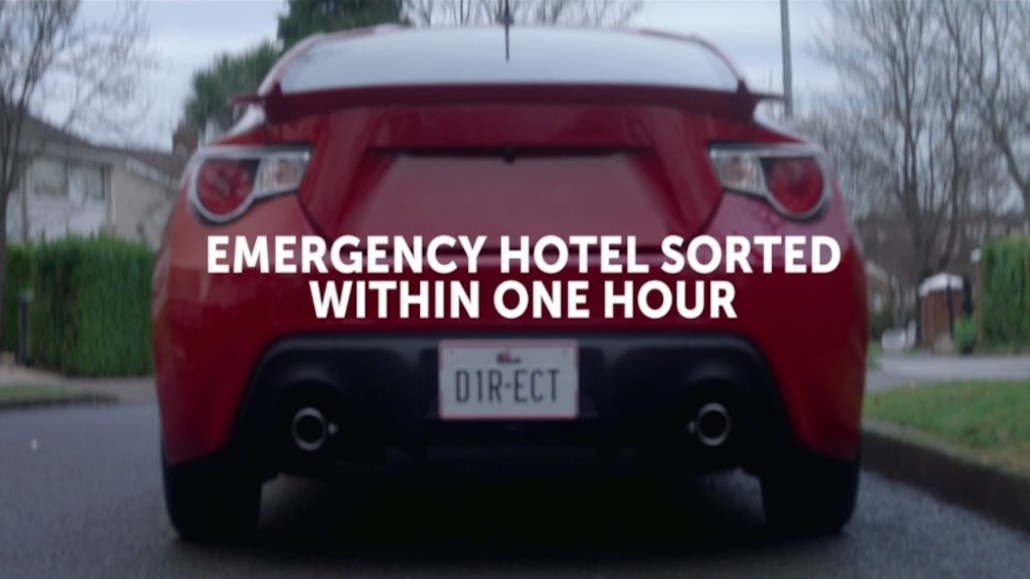 Trust between advertisers and their agencies may be at an all-time low, but insurance firm Direct Line Group is relying on its media agency to help it set up a programmatic buying unit.

Six weeks ago, DLG and its agency, WPP-owned MediaCom, formed a programmatic buying unit for the advertiser. Now, DLG can tweak the CPM it gives to publishers based on the average viewability rates. “It [the team] gives us real-time transparency on viewability across the ecosystem,” said DLG marketing director Mark Evans. “It’s still in pilot phase but gives us more confidence around this critical dynamic.”

It’s the latest step for DLG in understanding how and where its ads are placed and for how long people view them. Those insights give Evans’ team leverage to resist paying above the average for inventory that won’t be viewed for a meaningful amount of time. “In general, we don’t believe that industry standards on viewability are sufficient,” Evans told Digiday at the Festival of Marketing. “Fifty percent for a couple of seconds isn’t good enough.”

DLG is a rarity in the industry because it trusts its agency with its money. Agreeing last year to pay the media buyer a bonus when campaigns exceed targets, DLG sees value in a section of the supply chain that others don’t. It’s an endorsement clearest in how Evans won’t cut ties with MediaCom despite attempting to gain more ownership of DLG media buying.

Evans said one of the “problems of in-housing” skills is that it hives the brand off from the outside world. “It’s still critical to work with a really strong strategic partner for media planning and buying; otherwise, you won’t be able to keep up with the times.”

Evans declined to share more details about how the programmatic buying unit works, though it is likely to revolve around a MediaCom ad server pulling in information for his team on a platform they can access, as is the case for many advertisers. What makes DLG’s different from similar deals is that it seems prepared to pay more for inventory of better quality even if reach takes a hit. “We have to be flexible on the idea of ‘you get what you pay for,'” Evans said. “There’s no magic formula where you can add perfect viewability, perfect safety and get it cheap as chips. It’s about knowing where the thresholds are and seeing where the curve starts to decay and where you need to draw the line on what you spend on any given channel.”

The problem in the industry is there is a skewed view of the price it takes to get reach, as advertisers have arguably never closely scrutinized what they’re buying until now.

It might mean the brand has just “1 percent less of a budget” by going after premium inventory, reasoned Evans, but that’s “just sensible optimization as you trade the whole thing.” “He said that whilst DLG heavily reduced the number of digital display ads it buys in 2013, it now continually monitors spend across all its channels.

This is apparent in DLG’s YouTube strategy, which was revamped amid the fallout from the brand-safety crisis. The advertiser was the first across GroupM in the U.K. to run OpenSlate with MediaCom earlier this year. Using OpenSlate’s data on an initial campaign in the summer, DLG said it could identify the safest areas on YouTube for its ads. Some 85 percent of the campaign’s impressions were served to the top 5 percent of OpenSlate-verified YouTube channels, Evans said.

From its initial assessment, DLG concluded YouTube’s transparency issue is as much about brand safety as it is context. While there is no “harm” in appearing next to British animated series “Peppa Pig” content on the site, it’s “useless” for a brand like DLG, Evans explained. “[Understanding YouTube] definitely becomes an issue when [brand safety] is hitting the front page of The Times, and your CFO is asking for updates on where the business is on it.”

Many of Evans’ peers share his fears despite some parts of the industry viewing the brand-safety issue as a mere blip. Nearly eight in 10 (78 percent) believe fallout from the brand-safety crisis has damaged their brands, according to a recent CMO Council and Dow Jones study of 300 senior marketers.