‘More of a blip’: Boycotting brands are back on YouTube

Advertisers can talk all they want, but at the end of the day, giant video platforms are hard to resist.

Although a slew of advertisers made a fuss about pulling their ads off YouTube, many ads from these brands are still popping up there. And ad spend on YouTube has remained pretty stable, according to ad-tracking firms Pathmatics and MediaRadar.

“It was more of a blip, and most advertisers have been convinced by YouTube’s new filtering tools that should head off most, but never all, of these situations,” said Joel Espelien, an analyst at video research firm The Diffusion Group.

After The Times of London published an exposé in March about YouTube ads appearing against racist videos, more than 200 U.K. brands, many of them small, paused their spend on the platform. The brand pullouts then extended to the U.S. when brands including AT&T and Verizon pulled their YouTube campaigns.

MediaRadar does not track ads in the U.K., which is where most of the pullouts took place. But it found that in the U.S., six of 13 boycotting brands — General Motors, Johnson & Johnson, Nestle, AT&T, Verizon and Walmart — have run ads on YouTube in the past month. Three of these brands — AT&T, Verizon and Walmart — were in joint advertisements that featured deals with Apple or Vudu, so it is unclear how much control they had over pulling these ads.

All of the brands mentioned in this story declined interview requests. A Nestle spokesperson sent this statement: “We are in the process of reactivating media buying with Google, YouTube and Google Display Network. We paused our media buying for a short period of time due to brand safety concerns. We have worked diligently with Google during this period to improve brand safety standards.”

Verizon said in a statement it was “working with all of our digital advertising partners to understand the weak links so we can prevent [brand-unsafe ad placement] from happening in the future.” An AT&T spokesperson said that “our statement still stands,” in reference to the telecom company’s previous statement that it would remove ads from Google’s non-search platforms until it could ensure that its ads would be safe from extremist content.

Yeliza Centeio, associate media director at ad agency CTP Boston, said that following the initial brand pullouts in late March, her bids started to win about 8 percent more impressions on YouTube. More impressions clearing at the same price indicates that YouTube became slightly less competitive after brands dropped out. But after about three weeks, this bump stopped. Centeio suspected that YouTube’s CPMs only changed a few pennies during this time frame.

Because so many advertisers want YouTube’s video inventory, many buyers are willing to fill the gaps that big brand pullouts might create. As seen in the below charts from Pathmatics, YouTube ad spend in May is higher than it was a year ago. April and May spend is down from March, but it was also down last year. Pathmatics CMO Ken Roberts said recent drops in spend could be due to seasonal variances and aren’t necessarily related to YouTube’s controversy. 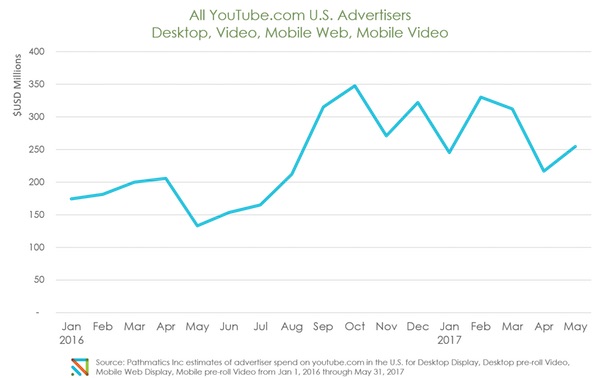 Aside from a big jump in spend toward the end of last year, U.K. trends follow a similar pattern. 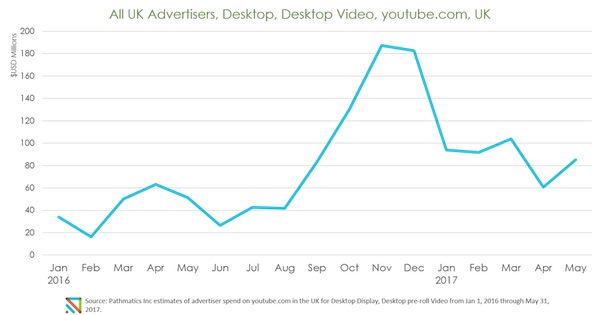 It’s worth noting that Pathmatics data has limits. It doesn’t have access to plug into apps at scale and track ads there, which is a common problem for third-party measurements. The YouTube app ranks third among Android users in total time spent, both globally and in the U.S., according to App Annie. (App Annie does not share time spent data for iPhones.)

Although YouTube appears to be chugging along just fine, the scandal has been good business for many players who want to chip away at the ad giant’s dominance. Agencies used it to pressure Google to provide more data back to them. Brands that paused their YouTube spend got a PR boost from headlines touting their moral crusade. And whether it’s worked is an outstanding question, but publishers pitched advertisers that unlike YouTube, their inventory would keep them safe from extremist content. And vendor salespeople claimed their own products would keep advertisers away from the brand-unsafe content on social platforms.

Google declined interview requests, but sent the following statement: “We’ve been conducting an extensive review of our advertising policies — and in recent weeks have made significant changes that give brands more control over where their ads appear.”

While there is an absence of evidence showing that the scandal damaged YouTube, the brouhaha has probably frustrated Google. Already, it has apologized to clients and allowed more third-party tags on its platforms to ensure brand safety.

Even though ad spend on the platform appears stable, Pivotal Research analyst Brian Wieser said the ad scandal could still cost Google about $1 billion in annual revenue. Over the next six months, talk of brand safety, rather than Google’s new products, will dominate sales meetings. The negative publicity also hurts YouTube’s quest for TV dollars, he said.

“But we will never see it in Google’s numbers,” he said. “We don’t know what YouTube’s global revenues really are, and they provide no reasonable estimate. We won’t be able to ever isolate the impact of this episode, so they can say it is immaterial on an investor’s call. But we have to ask, conceptually, what is the longer-term impact?”