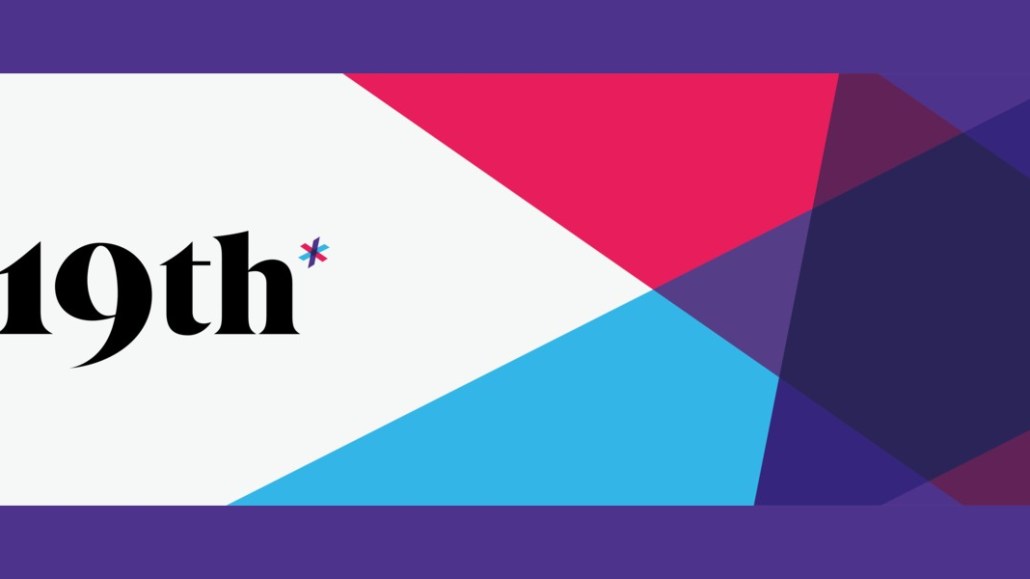 For most, launching a new publication at a time when the media industry not only has the operational challenges from the coronavirus crisis, but also the economic challenges of a recession would seem like a scary leap.

But for new non-profit publication, The 19th, its mission — providing women and people of color with the information and resources they need to be equal participants in the United States democracy — was too important to put on hold in the lead up to the presidential election in November.

A non-profit organization, The 19th — named after the 19th Amendment which gave some U.S. women the right to vote — is monetarily supported by a mix of membership, donations and corporate underwriting, meaning it’s free from the worry of chasing advertising dollars for survival.

It still isn’t exactly a cake walk. “Corporate underwriting is anticipated to be a cornerstone of our revenue model,” said Emily Ramshaw, The 19th’s CEO and co-founder. “Obviously, the COVID pandemic and resulting economic recession has led to a depression in the corporate market; we’re hoping it rebounds in short order,” she wrote in an email.

Membership and individual donations, therefore, have become a significant piece of the puzzle.

Publisher and co-founder Amanda Zamora said that she and Ramshaw spent the better part of 2019 developing the business model and product plan as well as how to grow and audience and sustain it and by the end of the year, they both felt they had enough validation, financial support and a strong enough business strategy to take the leap and leave their jobs at the Texas Tribune.

“We believed we needed $2 million in the bank to leave our jobs, and $4 million to make a serious go at launch,” said Ramshaw.

The 19th soft launched at the end of January, which made it easier for the founders to start hiring a staff — they brought on 22 people—and begin courting investments.

The plan was to fully launch The 19th at the start of August— it launched August 2—but once the coronavirus hit, there was uncertainty with that timeline if corporations couldn’t back the launch as much as they initially planned.

To keep on schedule, goals shifted and fundraising had to be kicked into high gear, Zamora said. The in-person summit it was planning to hold as part of its launch and in centennial celebration of the ratification of the 19th Amendment was turned into a five-day-long virtual event that will kick off next week and is sponsored by Goldman Sachs and Intuit.

Since the soft launch the publication received more than 1,000 founding member contributions, which ranged between $5 and $1,000. Within the first two days of the hard launch, Zamora said that number increased by 800. According to the site, as of June 30, it had 174 patrons, who had donated $1,000 or above.

“We think about membership not just as a revenue program but as an audience program,” said Zamora. “We want to hear their stories and have that shape our journalism.”

The 19th has a free republishing model where other publications are allowed to syndicate its content free of charge. The model was inspired by ProPublica and the Texas Tribune, both of which are Zamora’s alma maters.

Any digital publication, newspaper, community publisher or blogs can republish The 19th’s articles if it abides by The 19th’s Creative Commons license. Some of those guidelines are including hyperlinked credit to the author and The 19th, retaining a pixel tag that allows The 19th to track views of its stories on other domains, and not selling or syndicating the content elsewhere, such as aggregation platforms like Apple News.

Zamora said the goal is to figure out how to give its big publishing partners—the Washington Post, Univision, USA Today and the Philadelphia Inquirer— a more automated way for sharing its stories.

Republishing partners are not currently corporate donors, Zamora said, but having the distribution is important for membership and for editorial development.

According to USA Today editor-in-chief Nicole Carroll, USA Today’s digital audience is 147 million people, including 78 million women. The 19th is “dedicated to giving a voice to women and we thought it was important to use our reach to amplify their coverage and voice through our platforms,” said Carroll.

“We see the partnerships and distribution as more than just pushing our stories out to people, but thinking about how we can engage those audiences proactively,” said Zamora, whether that is through driving them to its newsletter, virtual events or social media platforms. And down the road, knowing where these audiences are can help inform where The 19th should take its events, she said.