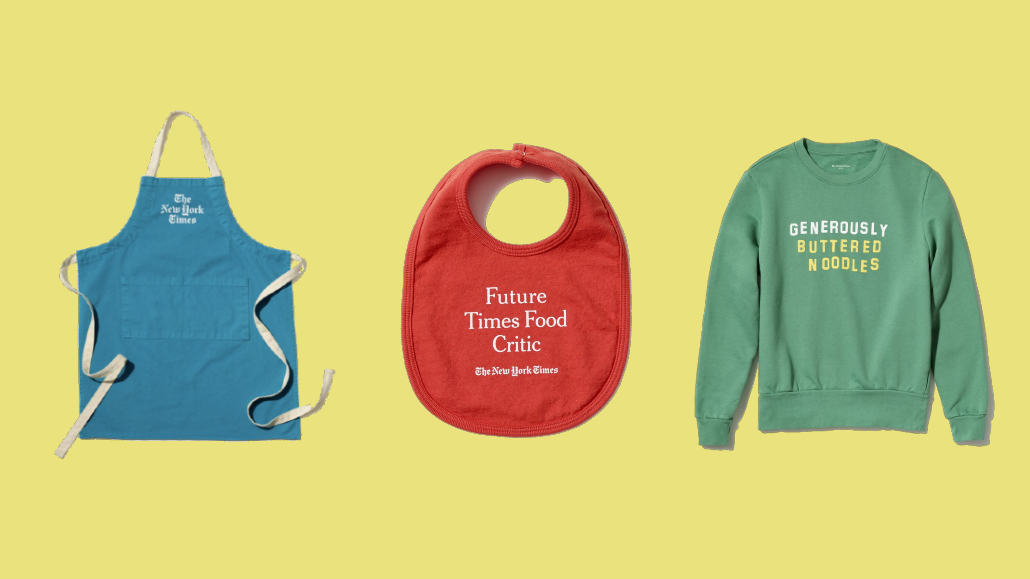 The New York Times’ has been in the business of selling branded merchandise for nearly two decades, but in the last three years, it has built out a modern, direct-to-consumer e-commerce operation in the form of its NYT Store.

And despite the consistent profitability over the past five year and seeing consistent year-over-year growth in revenue and number of sales — during the period between Thanksgiving and Cyber Monday the site received 3.2 times the number of orders it received during the same five-day period in 2019. Mark Silver, the Times’ vp of commerce, said that his team’s focus is not solely on the financial indicators of success, but on the further connections that can be created between readers and the publication.

This is exactly what the Times planned for in its holiday season marketing strategy with the late November launch of the first NYT Cooking collection.

“We have a luxury which is that the core business is doing so well. A lot of publishers are looking for a new revenue stream — that’s kind of a ‘nice to have’ here,” said Silver.

In the third-quarter, the category of “other revenues,” (everything aside from the advertising and subscription businesses including the Store, affiliate revenue and licensing) accounted for $46.7 million, or 10% of the company’s total revenue, according to the company’s earnings report.

Most of the products in the initial Cooking collection consist of clothing or accessories featuring phrases pulled from popular posts and other content meant to make the readers of NYT Cooking feel more connected to the section.

Silver’s team worked closely with the editorial team on NYT Cooking to select the language that goes on the merch in the collection.

The Crossword collection that was launched several years ago is a “strong parallel” to the Cooking collection, Silver said, in that it too is targeted at a niche, enthusiast audience that has “a strong sense of community.”

Most products on the site see peaks in orders at specific shopping times of the year, such as the Women’s Rights collection that launched ahead of Mother’s Day and was promoted again during the 100th anniversary of the ratification of the 19th Amendment in August. But the Crossword collection has consistently sold products throughout the year and is one of the best performing categories overall. For example, the NYT Store sold four times as many Crossword gift sets as it has general New York Times gift sets.

The hope, Silver said, is to replicate that success with the Cooking brand, which currently has nearly 600,000 subscribers by the end of the third quarter this year, per the earnings report.

NYT Cooking is in a better position than other affinity-based verticals for this type of merchandising opportunity, according to Ken Pasternak president and chief strategy officer of advertising agency TwoXFour. The Arts section, for instance, is harder to monetize through branded products because the natural sellable extensions of that vertical would be tickets to events.

“The Arts section is a brand that lives in people’s consciouses, but you can’t sell a product in that way,” Pasternak said. The Cooking section, however, has a white space in the products it can offer, like cooking utensils. Currently, it is selling aprons and phone and tablet stands that home chefs can use while following a recipe on NYT Cooking.

“Internally, there is a barometer for when a particular property is resonating with our readers. You have to grab it and go with it,” said Silver.