‘When terrible things happen, our numbers go up’: How NYT Cooking is approaching the pandemic, politics and inclusion 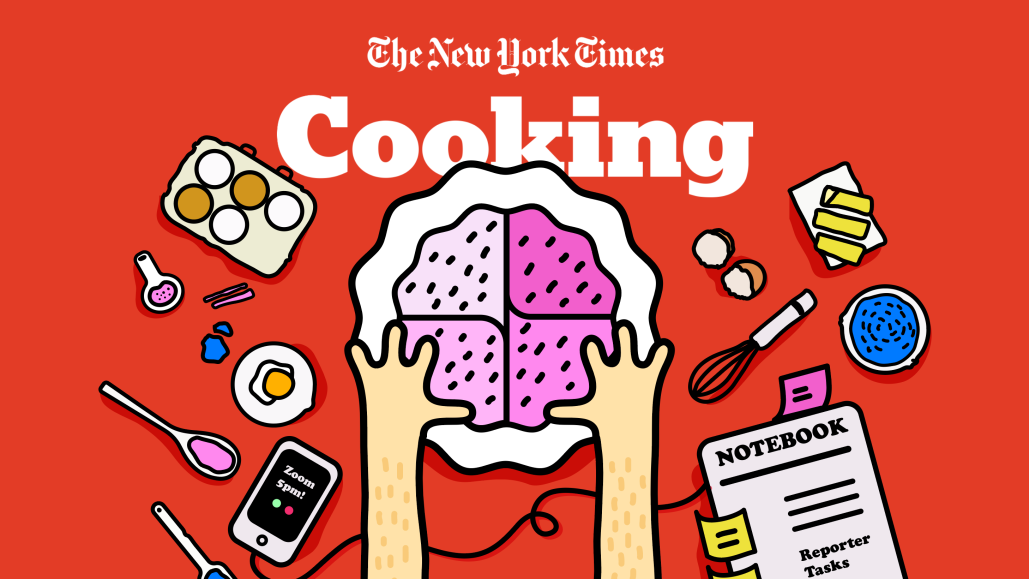 As the world shut down this spring, The New York Times dropped the paywall to its What To Cook collection.

It was a sign of goodwill to the millions of people stranded at home looking for a culinary project — or just some comfort food — but it was also a timely ploy to lure more subscribers into NYT Cooking, the paper’s standalone recipe storehouse and home kitchen guide.

“When life is difficult, when the news is bad, when terrible things happen, our numbers go up,” said Sam Sifton, the founding editor of NYT Cooking and an assisting managing editor at the Times. “Terrorist attack? Make beef stew. I’m not cynical about that. It’s human nature to want to nest and make delicious things when the news outside is frightful.”

While many media operations are flailing, the ongoing coronavirus pandemic has been a boom time for the six-year-old NYT Cooking, a key part of the Times’ overall strategy to grow its subscriber base, expand its product offering beyond news, and diversify its revenue streams. The NYT Cooking newsletter (produced four times a week with a fifth of roundup recipes) has 4 million subscribers and is the second most popular newsletter at the paper. Monthly uniques to Cooking have surged 66% from the same time last year. During the first six months of the year, the Times brought in $24.1 million in revenue to its standalone subscription products, which includes Cooking, Crossword, and audio products, compared to $15.7 million during the same period last year. (Cooking is included in Times print subscriptions and “all access” digital plans).

At the same time, a cultural reckoning on race following the killing of George Floyd last May has forced the Times, and NYT Cooking, to confront its shortcomings. The inequality and lack of diversity in the media business broadly — and in food media specifically — has become a central topic. In June, Bon Appétit editor Adam Rappaport resigned amid backlash about inclusivity and pay disparities in the magazine’s high-profile Test Kitchen video series. Following an exodus of video talent, Bon Appétit has since hired a Black editor and diverse cadre of new chefs.

At the Times, staffers mounted an internal revolt in June and forced the resignation of opinion page editor James Bennet following the Times’ publication of a controversial op-ed by U.S. Senator Tom Cotton. And in the food section, writer Alison Roman’s column was placed on hiatus after she criticized Marie Kondo and Chrissy Teigen as sell-outs in an interview (for which she apologized). Sifton said that Roman, who has since launched her own paid newsletter, has decided to not renew her column.

As the conversations around diversity in media intensified, Sifton was pushed to address the food section’s overwhelming whiteness. He wrote a letter from the editor in June acknowledging the country’s racial strife, declaring that Black lives matter, and pledging that NYT Cooking would diversify its staff, contributors, and recipes. “That takes commitment and action. We will show our work,” he pledged.

Throughout the turmoil of the past few months, Sifton, 54, has settled into a stream-of-consciousness style of food writing for his popular newsletter with a tone of ironic detachment and dark humor.

An example from October: “Good morning. The West is still on fire, and coronavirus continues to stalk the nation, particularly the Upper Midwest. Political tension vibrates in advance of the coming election. Everywhere the effects of systemic racism have been laid bare. Social isolation, meanwhile, has led to increases in overdoses, to declines in mental health, to loneliness so intense as to be personified: a new roommate, silent and angry. So many are out of work. And I’m here to sell you on a pan-fried eggplant with chile, honey and ricotta? Really? I suppose I am.”

Sifton explained to Digiday that he hopes the newsletter — and NYT Cooking in general — can offer an antidote to the gloom and despair that has set over. “From my point of view, we try to have a really tight focus on empathy and making things better for folks,” he said.

But Sifton has his critics. “It’s such an upper-middle class perspective on how the world is working right now,” said Alicia Kennedy, a food and beverage writer based in Puerto Rico. “‘You must be cooking all this beautiful produce but still concerned with the world.’ This tone that is so bourgeois and is precisely what the NYT Cooking section wants to appeal to.”

Sifton said he’s aware of the criticism. “It makes us work harder to be as inclusive as possible,” he said. Still, he added, NYT Cooking will deliver people what they want, even if “by dint of saying roasted salmon it marks it as middle class.”

“We’re not apologetic about deliciousness,” he added.

Kennedy hopes to see reporting about topics like front of house restaurant workers, agriculture, and meat processing make it from the Times business section to the food section, which now has a more lifestyle-based “Hudson Valley cabin vibe,” she said.

To that end, the food section is about to launch a “hiring spree” across its entire fleet of coverage, from recipes to reporting, Sifton said. The paper plans to double the number of food reporters (a Times spokesperson would not comment on how many people are currently on staff). In the last few weeks, NYT Cooking hired CC Allen as a senior video journalist and Genevieve Ko as a senior editor, both women of color.

“We recognize that there are potential gaps in our coverage and we want to be able to meet those needs, and we need more people on staff to do that,” said Amanda Rottier, the general manager of NYT Cooking.

Chefs like Eric Rivera agree. Rivera, currently the chef at renowned Seattle restaurant Addo, said the Times’ food writing has real implications outside of the home kitchen. He recalled how a Times article a decade ago about how some people perceive a soap flavor from cilantro led diners to request the herb’s omission. And when he recently learned that NYT Cooking’s only recipe for pernil, a classic Puerto Rican dish, was written by former Times food columnist Mark Bittman, he blanched. “I’m cool with people saying here’s my cover song, but I want to hear the original first,” Rivera said.

The Times’ new solution to this, in part, is to refigure its byline structure to give credit to the real provenance of a recipe, not just the journalist who learned it and wrote it up. It’s an effort to walk back the kind of cultural appropriation rife within the internet recipe writing economy. Food, NYT Cooking is learning, is inherently political. On the paper’s cooking community group on Facebook, for instance, members this week defied the “no politics” house rule to post pictures of food that spelled out VOTE.

But as it finds new chefs and writers to broaden its contributor base, the Cooking team is focused mainly on subscriber growth. Luring in existing Times subscribers to use NYT Cooking is one thing, but Rottier said that the larger opportunity is to bring in new home cooks entirely. “Search is the main way that users find us, and we’re talking about a bigger investment in our search capabilities and SEO,” she said.

NYT Cooking will also invest more in branding next year, Rottier said. The section launched its first brand marketing campaign, “What to Cook,” last year. And while it’s unclear when exactly office life will return, NYT Cooking has a new physical kitchen space in the works, and plans to further expand both its video team and its general news gathering operation.

“We think there’s still a massive opportunity to grow, and we’re still very focused on that,” Rottier said.