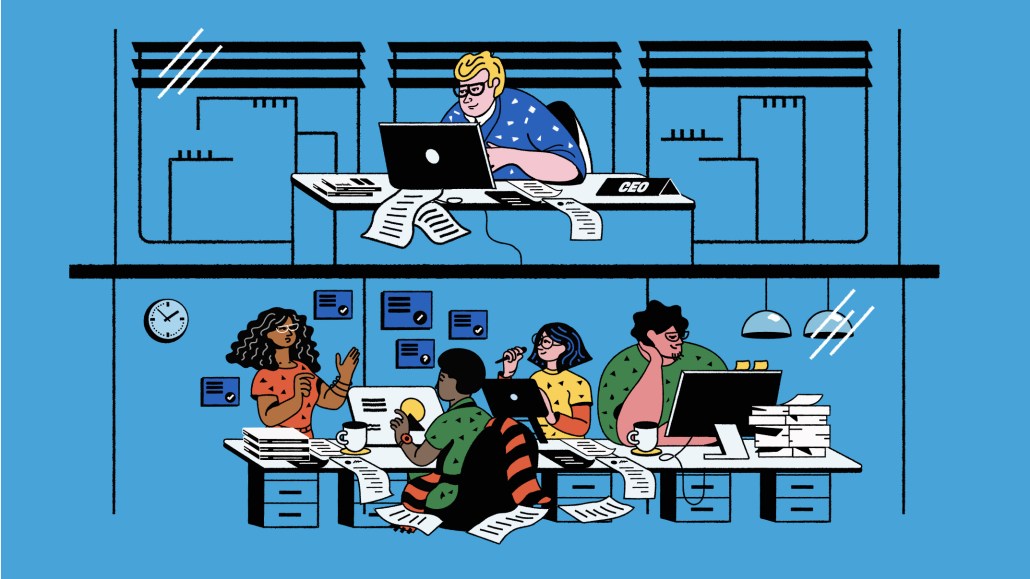 Media companies are still at work to meet the pledges they made in 2020 to diversify their staff.

Publishers like BuzzFeed, Inc., Hearst, Vox Media, G/O Media and the Los Angeles Times have made incremental improvements, according to their latest self-reported data, with more non-white people in their workforces compared to previous years.

But this progress raises an important question: what should be considered the benchmark for media companies’ DE&I goals? While the latest U.S. Census numbers show the country’s population is around 62% white, the benchmarks at some of these companies seem to revolve around becoming more reflective of the markets and audiences they serve.

National numbers of working-age population can be “a good starting point” for publishers who have a U.S.-based audience, but it’s also important for companies with larger operations in specific markets to reflect those communities too, said Matt Krentz, DE&I global chair at Boston Consulting Group.

The L.A. Times, for example, compares its employees against the demographics of L.A. County, as benchmarks. Over the next four years, the company’s goal is to “achieve a newsroom where Latinos make up at least one-quarter of our staff,” its diversity report reads. To get to that goal, execs are planning this year to adopt a new candidate-sourcing tool to monitor diversity indicators for potential candidates for future roles, revamping job descriptions to ensure they use inclusive language, implementing metrics “to monitor adherence to recruitment procedures and hold managers accountable,” training managers on behavioral interviewing “to ensure that selection decisions are based on objective and fair criteria” — as well as creating new editorial positions to cover communities of color.

The goal at BuzzFeed is to have its “employee population represent the world around us and the audience that we are trying to serve,” said Dionna Scales, director of diversity, inclusion & belonging and learning & development at BuzzFeed Inc. While the company doesn’t have “a particular target number in mind,” Scales wants “to see diversity increasing” in three groups — race and ethnicity, gender and gender identity and representatives from the LGBTQ+ communities.

At Hearst, it’s a bit vaguer. When asked if the company has set goals on the path to diversifying its workforce, a spokesperson said: “Our overall goal is to show progress every year and come closer to mirroring the markets we serve.”

However, it’s not just about hiring more non-white employees. It’s also about retaining talent, and promoting them to senior roles, according to Krentz. “At the company-wide level, moving these types of numbers is difficult and takes time,” he said. Krentz identified three main factors to consider when working to improve workforce diversity: the people you hire, and the retention and promotion of those employees.

Below are some of the diversity statistics Digiday is compiling in a running breakdown of publishers’ self-reported data.

Reflecting the diversity of the U.S. population

White employees at BuzzFeed, Vox and the L.A. Times’ staff reflect the same proportion in the U.S. Census (or less than), while Hearst and Gannett have a larger share of white employees. (At G/O Media, 65% of its employees are “diverse,” up from 63%, which G/O Media defines as a woman or a person of color.) Notably, each of these media organizations — except Vox Media and the L.A. Times — had notable layoffs or voluntary buyouts in 2021, which may skew the data.

New hires at these six companies were mostly people of color and women — other than at BuzzFeed, where 46% of new hires self-identified as non-white (though 69% overall were women). Scales noted that sometimes new hires often “have so much paperwork to do that they don’t always disclose, so it can be difficult to pinpoint that exact number.”

Just under a third (31%) of new hires were white in 2021 at the California Times, parent company of the L.A. Times and the San Diego Union-Tribune. 57% were women. The California Times did not provide this data in its previous report.

50% of new hires at Vox Media in the past year identified as non-white, down four percentage points.

As for promotions, white people made up 59% of those who were promoted last year at BuzzFeed, and women made up 63%.

Gannett did not report diversity numbers on new hires, and Hearst, Gannett, G/O Media and the L.A. Times did not report diversity numbers on promotions year over year. (Although, the L.A. Times report does state that between June 2018 and June 2021, newsroom management moved from 68% white and 65% male to 62% white and 62% male.) Krentz believes this is where the real problem lies.

While increasing the percentage of new hires who are people of color is the “number you can move the most quickly… The big watch out we need to be thinking about for all these companies: are they putting equal effort behind retaining diverse individuals?” Krentz said.

Senior management — who tend to be “white hetero men… over 40” — often focus DE&I efforts on recruiting, Krentz said. But “if you talk to women or ethnic minorities — they think the biggest issue is companies aren’t doing enough on retention and advancement,” he said. This leads to a “disconnect,” in which hiring more women and non-white employees improves, but if turnover also increases, it could keep its leadership diversity stagnant.

But companies need time to attract, develop and promote people to management and senior leadership roles, Krentz said — meaning it will take “a while” for a change in the diversity of a company’s leadership to be reflected in its reports. Krentz outlined two approaches: the first would be to set clear goals and reach specific percentages of diverse representation by a certain time. The second would be to have a metric that tracks the retention and advancement of non-white, non-male groups, such as promotion rate.

This is similar to what BuzzFeed does. When there is room in the budget for promotions, BuzzFeed looks at the percentage of people who were promoted from each group and tries to match that to the group’s representation at BuzzFeed. For example, to see what percentage of Black employees in the last year were promoted and what percentage Black employees represent at the company overall, Scales said.

While these media companies improved their representation of some racial and ethnic categories year over year, in other categories their share declined.

The share of Latinx/Hispanic employees went down at BuzzFeed and Hearst among overall employees (by one percentage point each), but up at G/O Media and Vox (by one percentage point). In 2021, 32% of employees at the L.A. Times overall were Hispanic or Latino — while this is up from 29% in 2020, it is still significantly disproportionate to the 49% Hispanic and Latino population in L.A. County, according to 2019 U.S. Census data cited in the report.

“We focus on diversity and inclusion and belonging,” BuzzFeed’s Scales said. “You can hire for diversity but then you can have people come into [the] organization and we don’t want them to feel unwelcome or that they don’t belong. We think about the entire employee life cycle.”

Editor’s Note: Data to represent BuzzFeed’s ratio of white managers was added to this story after publication.