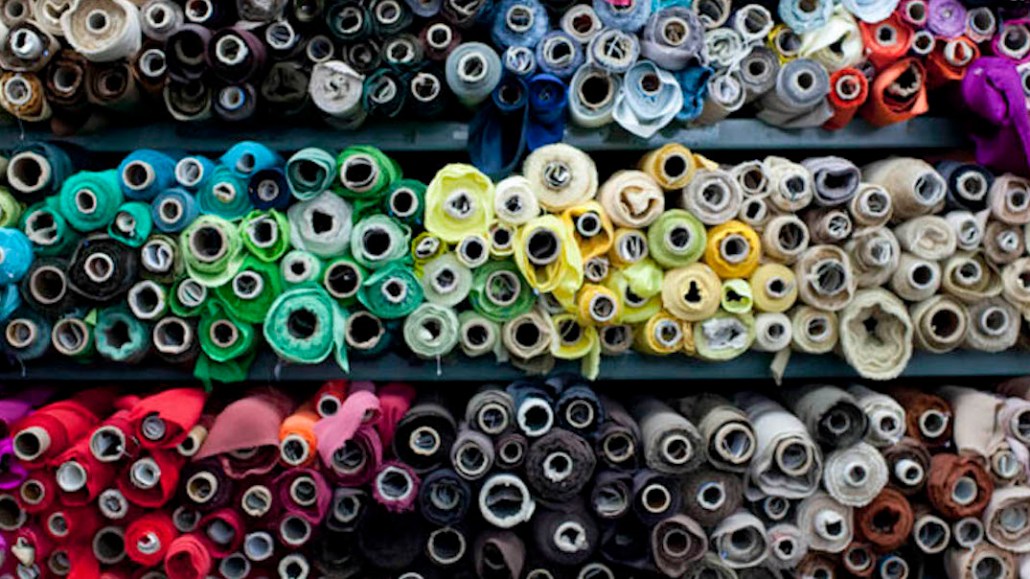 Eric Sauma spent most weekends growing up in Manhattan accompanying his father to work at Mood Fabrics, walking along with him to the shop on 37th Street to help hand out flyers.

On most days, what would normally be a quick jaunt across a few city blocks would take nearly 45 minutes, as throngs of people would stop his father to talk shop or say a quick hello. If you worked in fashion, Jack Sauma was the man to know. On any given day, Eric’s father was accosted by aspiring designers, businessmen and manufacturers from all walks of life, as trucks whizzed by in the background carrying garments and hundreds of workers walked the streets pushing carts filled with fabric.

For reality television enthusiasts, Mood likely evokes scenes from Project Runway — the fabric store is typically the first stop for competing designers during design challenges. However for Eric, Mood is the family business that he now runs alongside his brother, Philip. After several decades of working in the garment district, Eric can attest that the thriving days of commerce that he experienced as a boy in the 1980s have dramatically quelled. “All of that has been obliterated over the last 20 years, as the result of deregulation and shifting manufacturing to China,” he said.

Those early walks with his father paint a portrait of the garment district in its prime — for nearly two decades, the area of the city has been in decline. Now the garment district is under even more duress as the result of a proposed redistricting plan put into action by Mayor Bill de Blasio’s administration, with the support of the Council of Fashion Designers of America, that has the potential to relocate the area to Brooklyn.

The transformation of the garment district
Designer Yeohlee Teng got her start in the garment district in 1981, selling her first collection to Bergdorf Goodman shortly after graduating from Parsons School of Design. At the time, she didn’t yet have factory space, and she wandered the Midtown streets until she found an available spot on 37th Street. More than three decades later, she still produces in the district, just a couple streets away on 35th Street.

Teng said her story is a familiar one, a trajectory echoed by many of her peers who left fashion school and took to the streets or moved to New York, hoping to learn the ropes from garment makers who were all clustered within a few block radius. “All the students at places like the New School depend on the proximity of the garment district to get things done. It’s really important that we continue to nurture and incubate future designers,” she said.

But over the years, fashion jobs in the district began to diminish as designers outsourced production overseas in search of cheaper rates. In 1987, there were 30,000 manufacturing jobs in the garment district, contained in one 4.5 million square feet area. It was protected by zoning laws that prevented real estate moguls from buying up factory space and flipping it into luxury real estate. Now there are just 5,000 workers occupying the same space, and discussions have percolated over lifting overlay zoning that protects garment businesses on side streets in the area.

Barbara Blair, president of the Garment District Alliance, said maintaining the zoning at it stands is an impediment to other flourishing industries — namely in the technology and media space — that lack available real estate to set up offices amid an increasingly competitive market. Meanwhile, prices in the area continue to rise, making it challenging for remaining factories to remain in the garment district.

The alternative presented by Blair, along with the city’s Economic Development Corporation and the Planning Commission, is to relocate the garment district to Sunset Park, an industrial area of south Brooklyn along the East River. The deal, as it stands, would offer five or ten-year leases for locations in Brooklyn at the rate of $16 to $25 per square foot, in comparison to the price tag of upwards of $37 in Manhattan. The goal is to have the area ready by 2020, which will require extensive renovation and the installation of infrastructure and new technology.

The proposed plan has been particularly divisive within the industry, as seen during several community board meetings in which disgruntled garment district workers have voiced their concerns. During the most recent meeting last week, one man called the move “a deportation to Brooklyn.”

“It’s very disheartening that the industry is not looking at some of the core challenges that they have, one of which is overseas labor,” Blair said. “If designers are giving more businesses to local factories, the factories would be more robust and sustainable.”

Steven Kolb, president of the CFDA, said in a statement that the CFDA supports the proposal as it is in favor of citywide manufacturing, and recently announced $750,000 in grants as part of its Fashion Manufacturing Initiative.

“We don’t see the zoning as it is now working. We haven’t for a long time, and we don’t see how it can ever work. Our neutral position reflects that view, and we believe the efforts are better served on investing in garment manufacturing businesses citywide.”

“I live in Sunset Park right now, and it’s hard for me to commute,” said Charles Beckwith, president of Save the Garment Center, which is against the proposal. “It takes me an hour to get to my office on 25th street. I know that most of the high-end garment workers live in New Jersey, the Bronx and Queens, which is even further.”

According to a 2015 survey by Manufacture NY, a fashion design and production incubator, 60 percent of apparel workers commute to Midtown from Queens. Requiring them to go to Sunset Park would nearly double their commute, according to Bob Bland, CEO and founder of Manufacture NY and co-chair of the Women’s March on Washington.

“Keep in mind a lot of these people have families and many have to pick up their kids on the way home from work,” she said. “Some may have an elderly parent they’re looking after — the EDC needs to assess all of these factors when they are providing solutions.”

Additionally, pending changes to transportation infrastructure throughout the rest of the borough have even larger implications. Veronika Harbick, founder of Thursday Finest, a company that produces 3D-printed ties in Bushwick, said the imminent closing of the L train means she’ll likely need to move within the next year. As a result, she’s already concerned about the increased competition for space in Brooklyn. “We don’t actually know what will be affordable, considering this policy can work,” she said. “It’s not set yet. It sounds like there might not even be enough space available.”

Blair expressed frustration over the outcry from the fashion industry, and said the GDA is prioritizing maintaining the garment district as a “cluster” of likeminded individuals and resources, whether that means it’s in Manhattan or Brooklyn

“How did garment manufacturers become a protected class of business in New York City? These are not charities, they are not cultural institutions — they are businesses and they need to compete for business,” she said. “The idea that they get protected space and another business doesn’t just doesn’t make sense.”

The future of manufacturing in New York
Ashley Paintsil, editorial director at FashInvest, said while she is sympathetic to nostalgia-based arguments, altering the zoning laws will be an important way to preserve local manufacturing by providing more affordable spaces. The key, she said, is tactful negotiation on both sides of the issue.

“I understand why people are so emotional about this, but 95 percent of that work force has been given to overseas manufacturing,” she said. “This is a really good first step for the garment district trying to save itself and in turn save American manufacturing.”

One solution, according to Debera Johnson, founder of the Brooklyn Fashion + Design Accelerator at the Pratt Institute, is to transition to producing smart and advanced fabrics that will help bolster production jobs in the city. Her organization has already received a $500,000 grant from the federal government to develop smart apparel.

Teng, the designer who got her start in the garment district in the 80s, said ultimately she believes manufacturing can thrive throughout all areas of the city, but the current plan as presented fosters deep uncertainty without concrete solutions.

“When something happens over a period of time, everybody adjusts to it. The consternation that the industry feels is that this going to happen within 60 days, and that’s alarmed a lot of people,” she said. “The conversation of Brooklyn being ready by 2020 is a moving target. I think it’s uncertainty that’s clouding the issue.”

For Eric Sauma at Mood, running a New York institution won’t protect him from the inevitable loss of business wrought from a loss of proximity. Pushing his top shoppers to Brooklyn will only make them less inclined to shop with him, regardless of customer loyalty. However, he remains hopeful that the garment district will continue to succeed.

“The industry has shrunken a little bit, but there’s still a thriving industry,” Sauma said. “There are still people who don’t have time to waste for China, Japan or Korea. They buy fabric from us and then they send it to a local contractor, and they need to turn around a garment in the same day.”

Meanwhile, the fight will continue to wage between proponents of saving the current garment district as it stands and creating a new center of commerce in Brooklyn.

“The bottom line is that the Garment District Alliance is made up solely of property owners in that district. Of course they’re going to recommend something like a garment district rezoning,” said Bland, founder of Manufacture NY. “Calling it the Garment District Alliance is a misnomer. They are not in any way on the side of garment manufacturers.”