When it comes to distributing videos on social platforms, European publishers see it primarily as a way to build audiences than to generate ad revenue, according to a Digiday survey.

Of the 65 publisher executives surveyed at the Digiday Video Summit Europe in Amsterdam this past June, nearly half said the biggest advantage to distributing videos across social platforms is being able to generate larger audiences. Just 20 percent of respondents said they viewed ad revenue as the greatest benefit.

Because European publishers often operate in smaller markets, distributing videos on social platforms is often viewed as a necessary strategy to build scale. One attendee to the event quipped, “Is it possible to scale without social platforms? I’m not sure it really is.” 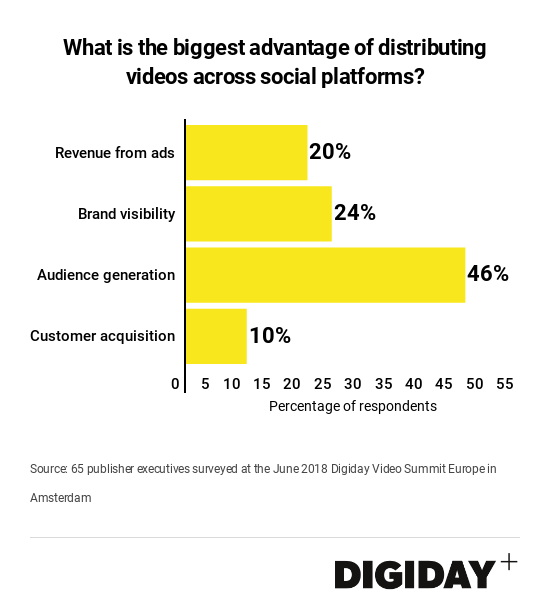 By generating audiences on social platforms, many publishers ultimately hope to redirect viewers to their owned sites, of course, where their monetization and data collection capabilities are superior.

As for making money off their videos, monetization opportunities continue to lag audience building capabilities on most social platforms. IGTV is still in its infancy, Facebook just expanded mid-roll ads to publishers in Europe and Snapchat can be difficult to make profitable unless you’re a lean digital-first publisher. In fact, European publishers rated all platforms that weren’t their own or YouTube as challenging to monetize according to previous Digiday research. Meanwhile Digiday research also found the majority of publishers make most of their video revenues from their owned sites.