Many European publishers, like those in the U.S., attempted the “pivot to video.” Although enthusiasm for the strategy may be dimming, 92 percent of publishers in a recent Digiday survey said they’re still increasing the amount of videos they’re producing in 2018. A key motivating factor for publishers is the growing amount spent on video advertisements. According to a recent report on advertising in Europe for by the IAB Europe and IHS Markit, spending on video ads reached $6.17 billion in 2017, a 35 percent year over year increase from 2016. With that in mind, we asked 65 European publishers at the Digiday Video Summit Europe last month to rate which platforms are the best and worst to monetize and distribute video across. 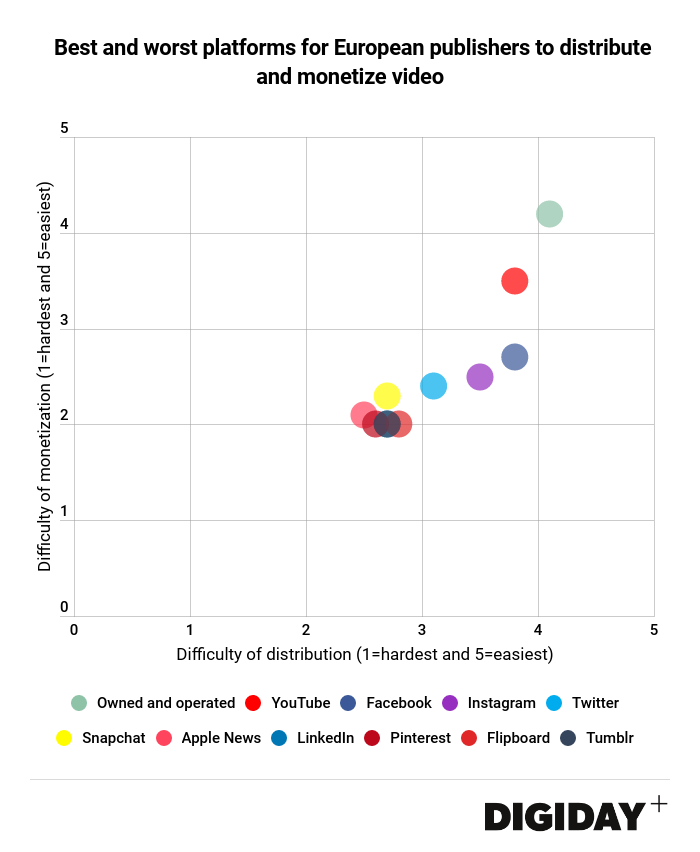 Best platforms:
Owned platforms: Unsurprisingly companies’ favored destinations for their content is their owned sites. After Facebook’s retreat from publisher content, publishers like U.K.-based PinkNews have focused on building their direct traffic that they can then monetize with their own video ads. GDPR might also be a boon for Europe’s publishers as advertisers look to purchase more programmatic-guaranteed deals for video ads because of publisher access to first-party data.

YouTube: Following publishers own sites, YouTube is the clear favorite among the social platforms in terms of monetization. YouTube also tied with Facebook for ease of video distribution leading a number of publishers including The Economist and and CNBC International to start to prioritize it.  That’s because publishers like Financial Times are able to take all the videos from their site and easily find audiences for them on YouTube. YouTube’s greatest strength, though, is its size. Because advertisers can’t avoid YouTube — even when trouble strikes in the form of a brand-safety scandal — publishers will never run into monetization challenges unless YouTube itself alters the way it compensations publishers.

Facebook: Despite the changes Facebook made to it’s news feed European publishers still thought it was the third-easiest social platform to monetize. That’s in stark contrast to U.S. publishers who labeled it as one of the hardest to monetize. What’s more, Facebook Watch hasn’t launched in the UK. However some are claiming they are getting record revenues from Facebook’s midroll ads. Even after Facebook tweaked its algorithm, nearly one-third of publishers refused to abandon their existing Facebook strategies which could explain why European publishers are still bullish on the platform .

Twitter: Twitter has been on a mission to win over publishers frustrated with Facebook. Although European publishers rate the platform lower than their U.S. counterparts, some in Europe are starting to appreciate the platform’s promise. ITN Productions News monetizes its video on the Twitter and has coincidentally seen the platform become more important in last 5 months, just about the time Facebook retreated.

Worst platforms:
Everyone else: Apple News, Snapchat, Tumblr, Pinterest, and Flipboard have all made their their way to Europe, but publishers clearly hold a muddled view of them. All five ranked poorly in terms of monetization opportunities and video distribution. Flipboard and Pinterest specifically function primarily as referral traffic sources for publishers rather than hubs primed for hosting videos and generating video revenues. Meanwhile Snapchat, after cutting the fees it paid to Discover publishers, is working with U.K brands to prove the efficacy of their ads. Should that prove successful and Snapchat is able to draw more ad dollars, it could separate itself from the pack of other less-monetizeable platforms.