In the post-Facebook era, publishers see increase in direct traffic

After scrambling to distribute their articles as widely as possible, publishers have been trying to wrest control back from the tech giants Google and Facebook and get people to come directly to their sites. Now there’s evidence that it’s actually happening, on a broad scale.

Chartbeat is publishing new data today that shows that since October, more mobile readers are coming to publishers’ sites and apps directly than from social platforms, namely Facebook. The number of weekly pageviews, as shown in the chart below, coming direct has steadily climbed since October, while Facebook-driven pageviews have declined. Another view of the data showed that when Facebook traffic to publishers’ desktop sites was included, direct mobile traffic was still greater than Facebook referral traffic. 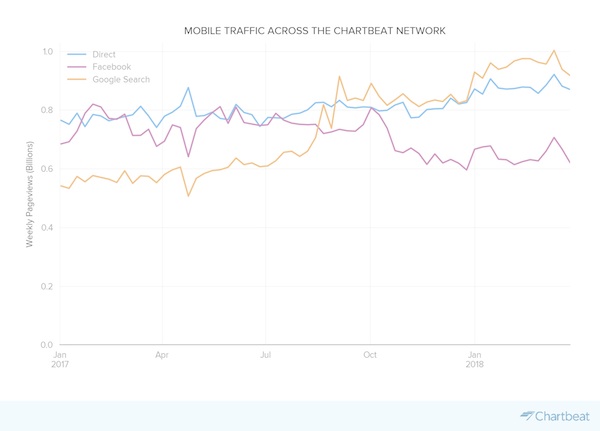 During this time, Facebook has been sending less traffic to publishers, a trend that’s continued this year when the platform made very public in January that it would prioritize users’ posts in the news feed. Chartbeat said there’s no clear correlation between the Facebook decrease and mobile direct increase that would imply the direct traffic increase is because of Facebook, though.

Chartbeat didn’t have definitive conclusions on why the direct traffic has increased, but suggested it could be that people are more loyal to publishers than previously thought. Mobile has already won over desktop, and most of mobile traffic is from Facebook, but another explanation is that mobile is actually a bigger driver of their media habits than Facebook is.

Mobile’s taking over desktop is not necessarily a bad thing; historically, mobile ad rates have trailed those of desktop, but they’re starting to catch up. At entertainment site Ranker, for one, programmatic ad rates for mobile have started to surpass those of desktop, said Clark Benson, the site’s founder and CEO.

On an individual basis, publishers have been making moves to get more people coming to them directly and wean themselves from dependence on Facebook. The Daily Beast, for example, said it has seen a 30 percent increase year-over-year in traffic coming to its homepage, which is now around 40 percent of its traffic, a trend it’s cultivated by paring back the number of articles it has on the homepage and creating new newsletters. LGBT site PinkNews has 30 percent of its traffic coming direct by focusing on hard-hitting stories instead of what it thinks will play well on Facebook. Slate President Dan Check said Slate has been focused on strengthening reader engagement for the past several years, which has paid off as new reader acquisition has become harder.

The increase in direct traffic matters because it enables publishers to control their own destiny. They have more data on reader behavior, which enables them to better target readers with more content and offers for subscriptions and other revenue drivers.

“Direct is extremely important to us as it is an indicator of the strength of our brand,” said Chris George, evp of product marketing and sales strategy at women’s lifestyle site PopSugar, whose traffic is 70 percent mobile, with direct traffic now representing 33 percent of mobile traffic. “As we look to monetize our audience across commerce, brand extensions, ticketed events, etc., we see the direct audience converting at the highest rate. As we grow our direct audience, we strengthen our brand and our ability to diversify revenue.”

https://digiday.com/?p=289348
Most Read
Trending in Publishing in the Platform Era
Digiday Top Stories