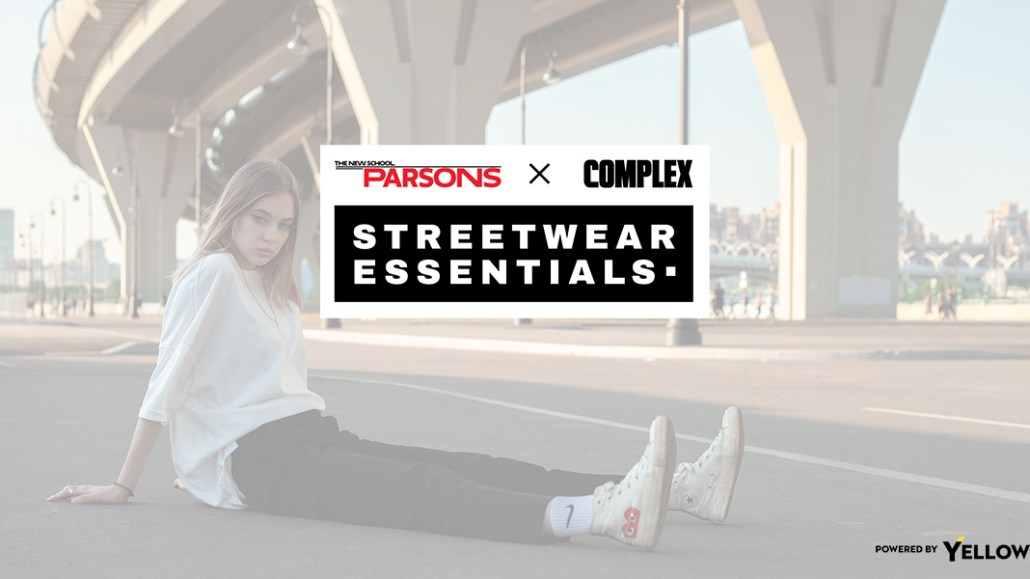 Complex Networks is taking its expertise in all things streetwear to the online classroom and building a business off of its employees’ market intelligence.

Through a partnership with the Parsons School of Design, Complex recently launched the online Streetwear Essentials course, which consists of five approximately five-hour long video modules with assignments that are submitted and graded by professors from Parsons school who specialize in the streetwear vein, according to Jeanette MacKenzie, Complex’s vp of commerce and business development.

Each module focuses on a different topic related to creating a streetwear fashion business, including design, marketing, retail operation, product distribution and entrepreneurship. The videos feature interviews with designers in the space, who MacKenzie said Complex had existing relationships with from past editorial projects. Some of Complex’s editors and Parsons’ professors and alumni were also interviewed for the modules.

“In the same way that we expanded our ‘Hot Ones’ universe,” with a line of hot sauces and now a network television game show, “we’re productizing our expertise,” MacKenzie said.

Two years ago, the publisher was approached by a third-party company called Yellowbrick (which connects universities with brands to create education programs) to create its first online learning course called Sneaker Essentials in a partnership with the Fashion Institute of Technology. The program, which is still available for students to register for, was longer. It had six video-based modules that lasted between four to five hours each and had assignments throughout. It was popular enough (MacKenzie declined to say how many students signed up) that the company decided to do another one this year.

For the next course, however, she said her team addressed some lessons they learned after the first attempt and approached this partnership with Parsons differently. This included making sure the editorial staff was very hands-on.

During the course creation process, for instance, Complex’s editorial staff was tasked with selecting the talent featured in each video module, conducting the interviews, shooting the videos and writing and editing the assignments. Parsons’ involvement included making sure certain topics were included in the course, selecting the professors tied to the project and making sure it aligned with the school’s curriculum.

While students can take the class at their own pace, MacKenzie said the maximum amount of time for students to complete each course is one year. Graduates from this course also receive a non-credit certificate from the schools.

Both courses are priced at around $1,000, however, she said that there are scholarships that the talent featured in the course are able to hand out as a promotional tactic.

Complex earns revenue from the e-learning course through a commission made off the tuition, though MacKenzie declined to share the publisher’s commission rate. This revenue, however, feeds into the company’s commerce business, which now accounts for 15% to 20% of Complex’s overall revenue, according to a company spokesperson. Recently, the company has been growing this revenue stream, including opening an online store last year.

MacKenzie said that while she sees value in this e-learning business, she wants to go deeper with the programs it already has, versus continuing to roll out new programs. So far, she said Complex and Yellowbrick worked to create a program to connect graduates from the courses with internships opportunities to help with career development. And down the line, she said she hopes to expand into live events.

Chris Erwin, founder of market research and strategy advisory company RockWater said that he has seen a trend in the media industry for publishers to try and monetize their market intelligence. Often times, he said he recommends a similar education model to his clients, telling them to find ways to monetize expertise deeper down the funnel.

Erwin said that the employees at Complex are “experts at creating content and community in the online world and doing it through the extension of education” is an intelligent way to scale that expertise appropriately.

A previous version of this article stated the Streetwear Essentials course consisted of five, one-hour long modules. Each module is approximately five-hours long.