‘Becoming a vertical’: How Complex’s research arm turned into a 7-figure revenue stream

Complex Network’s research arm, Complex Collective, spent the past year proving that brands are willing to pay to hear directly from audiences themselves in an effort to do everything from perfecting messaging to finding out how to sell to a new consumer base.

Two years after its debut, the Collective has become a seven-figure business for new parent company BuzzFeed. The company would not disclose hard revenue figures. The research arm makes money from clients looking to access Collective’s network of 30,000 audience members who ideally answer questions posed to them. The Collective panel is also accessed for editorial purposes to produce and inform content by the writers and editors across Complex Network.

Last year, the Collective doubled its number of clients from six to 12 brands, including Banana Republic, the Centers for Disease Control and Prevention and The Advisory Council. Those clients paid between five- and six-figures for custom research, according to Aaron Braxton, general manager of Complex Collective. In 2022, he said there are already three times that amount committed to working with the Collective throughout the year.

“The expectation is that the insight layer of what we’re doing, both from a customer standpoint as well as an editorial standpoint, will continue to increase in volume and frequency to be the tip of the spear on our client outreach,” said Braxton. “It really can be an effective multiplier to both deal size as well as client satisfaction.”

The Collective has maintained a cohort numbering about 30,000 community members between this year and last, all of whom organically came across the group and signed up while reading and interacting with Complex Networks’ content. While there is a high churn rate among the panel’s members, Braxton said there is still enough regular on-boarding to maintain that list size and the average response rate for all surveys sits at 61% (this includes sample pools of all sizes).

Complex does not pay people to become members of Collective’s panel, and none of the members have received any other incentive for signing up, such as gift cards or prize giveaways, said Nick Susi, Complex Collective’s head of strategy. He added that hearing their voices and seeing their opinions represented in the content and campaigns produced through the panel gives the audience a feeling of connection and community that incentivizes that on-giong participation, along with being given access to exclusive virtual events where they can learn about some of the takeaways from the research conducted in the Collective as well.

“This is a community, this is not a collection of folks that we dip into and dip out of whenever we please, with more transactional types of asks,” said Susi.

However, some brands are hesitant about relying on self-reported data, such as survey responses, to inform their ad buys. Basing a campaign around survey findings and achieving the anticipated results does not always go hand-in-hand, said Lily Johnson, senior media strategist at media buying agency Media Two Interactive. Therefore, brands and organizations paying for these insights have to be sure the target demographic aligns with the sample pool they’re surveying.

This is an “interesting branch off of first-party data,” Johnson said.

While Braxton said the goal is to keep the 30,000 number pretty consistent in the U.S. in 2022, Complex plans to establish panels in the U.K. and other international markets this year. The publisher also plans to hire about a dozen new dedicated Collective employees, including community management roles. Up to this point, the research arm has been run as a cross-functional business by the core Complex Networks team, he added.

Additionally, Complex has formed an advisory council for the Collective. The council consists of eight executives, activists and company founders — such as Sharifa Murdock, chief impact officer at clothing retailer Kith, professional BMX athlete Nigel Sylvester, and footwear creator and curator Frank Cooker — who represent the different audience demographics as well as categories that the Collective is able to speak to, including social change, sports media, design trends, fashion, community and hype. The advisory council members are not paid for their participation. 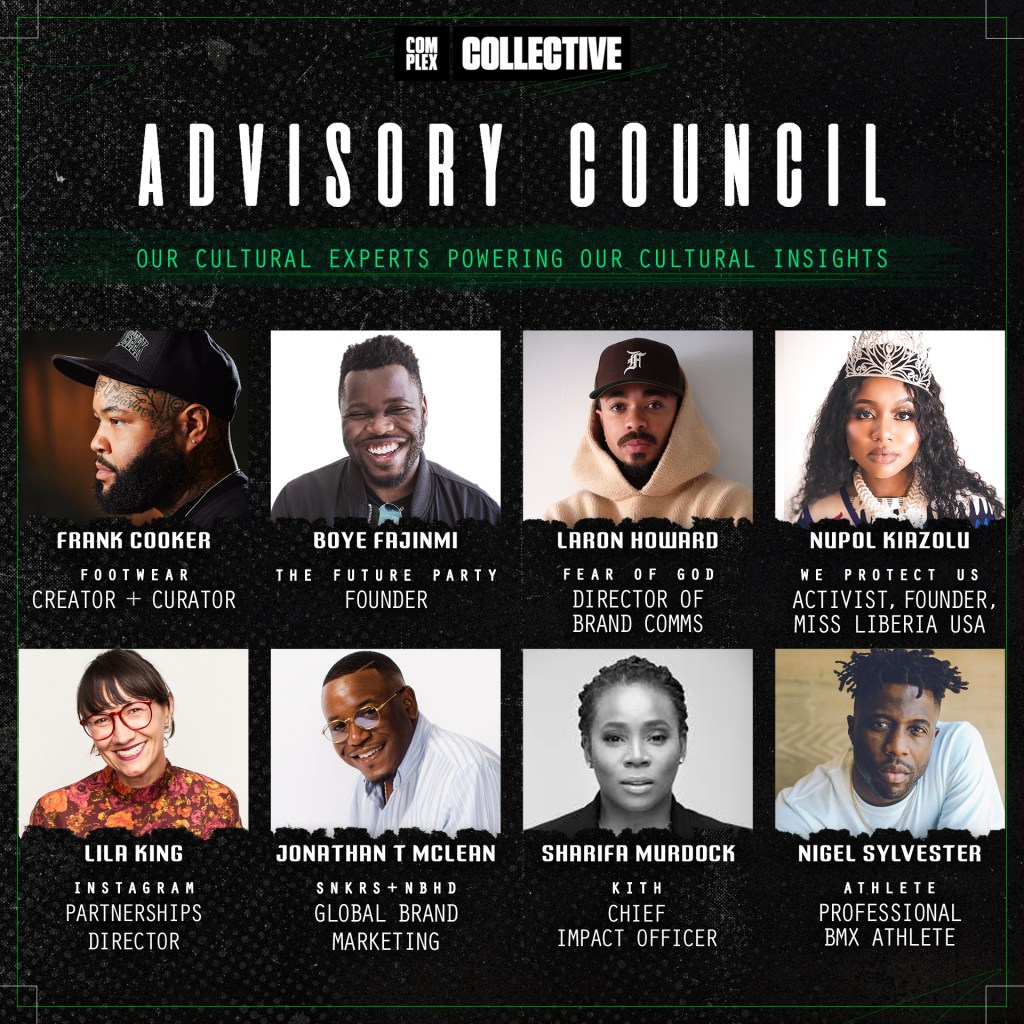 The members of Collective’s advisory council will attend industry events and in-person experiences programmed for the Collective as well as participate in the Collective’s upcoming podcasts and audio products in the coming months. These offerings will be extensions to both the branded and educational content that the Collective team has produced for both commercial and editorial purposes over the past two years. That branded and educational content is distributed across Complex Networks’ publications, and some is white-labeled for brands to use and distribute on their own.

While this advisory council programming is meant to help with the retention of Collective members by giving them opportunities to hear council members’ opinions, it also gives brands access to insights from experts and executives in industries, like footwear and fashion, that they would normally only get if they had them as paid consultants, Susi said.