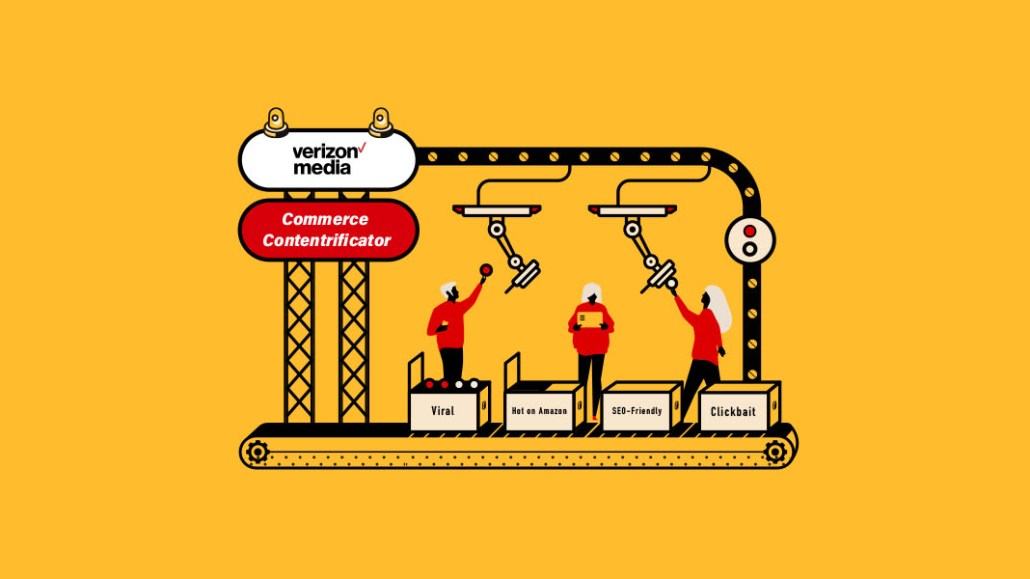 Last year, Verizon Media Group CEO Guru Gowrappan told Digiday that commerce could account for one third of Verizon Media Group’s revenues in the next five years, and that it would spend the coming year laying the foundation for that growth.

Today, Verizon is still building on that bet, but progress on commerce opportunities is now threaded into the fabric of the media group, which includes Yahoo, HuffPost, TechCrunch and Engadget. Two commerce-focused content brands, Yahoo Life and In the Know, produce hundreds of pieces of content per week; Yahoo Mail users can put the ingredients from a recipe into a Walmart shopping cart without leaving their inboxes; and the company is testing both native checkout and shoppable videos across its portfolio.

Those and other innovations have helped Verizon Media Group build direct relationships with some 30 brands and retailers, including adidas, Best Buy, Banana Republic and QVC. Some of those deals are focused just on affiliate sales, while others are more elaborate, featuring everything from original content production to augmented reality projects.

And while content remains a core component of the group’s commerce revenue strategy, the product-level integrations are driving most of the deals.

“We’ve been able to be a powerful partner to the retail, grocery and lifestyle categories,” said Lambert. “When we looked at this 12 months ago, we were looking at an aggressive strategy to build on the strengths we have.”

While Verizon Media Group’s portfolio is best known for some of its oldest brands, commerce growth has been fueled by some of its newest. In a year when most media companies were squeezed by layoffs, Verizon hired several people to help boost content output for In the Know, which now produces over 400 pieces of content per week.

The resulting output has caught the eyes of buyers.

“Last year, it was rare that Huffpost and In the Know would come up naturally in conversations with clients,” said Kristina Nolan, vp of affiliate at the agency DMi Marketing. “But this year, because we’re doing a lot of competitive analysis, a lot of [their sites] have been immediate targets.”

While not every brand in the Verizon portfolio is equally invested in commerce, all or most of them still get involved in the largest deals. For a second year, Walmart and Verizon Media Group worked on a campaign called 30 Days of Savings, which featured content produced across titles including Yahoo Life, In the Know, HuffPost and TechCrunch, as well as early access to sale prices on hundreds of products.

Campaigns that can tap into all of Verizon’s properties, including mail, can drive strong results. Last year’s 30 Days of Savings campaign delivered 12 times more revenue than estimated, Lambert said, and this year, just a few days in, revenue is five times higher than it was last year.

The pandemic has played a role in that growth. Just as the spread of coronavirus sent customers hunting for a variety of unusual items to help them get through lockdowns, those same lockdowns also kept many people out of brick and mortar stores and encouraged more consumers to start buying things online.

And some of Verizon Media Group’s growth came from consumers who typically do not buy things online, Lambert said, adding that an extended shopping season kicked off by Amazon Prime Day in October has lengthened the window for online holiday shopping.