Why Zola, Tinder vowed to highlight marriage equality in new marketing to support the Respect for Marriage Act 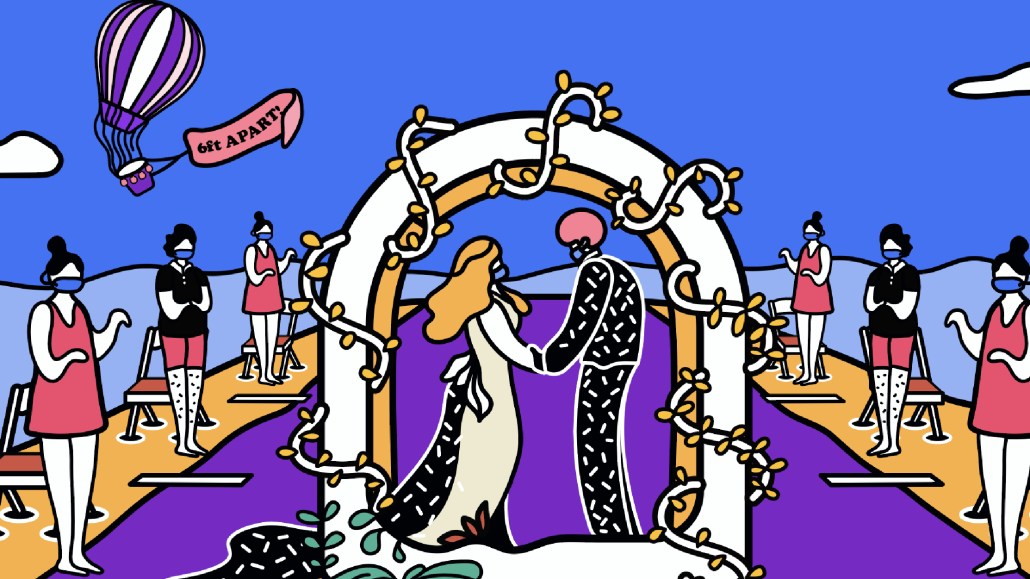 Pressure is mounting on the U.S. Senate to pass marriage equality legislation as fears of a potential rollback by a future Supreme Court ruling heightens. At least two companies are rolling out marketing campaigns around the issue.

Within the last week, dating app Tinder and wedding registry startup Zola went live with advocacy campaigns in support of the Respect for Marriage Act (RFMA), which protects the right to same-sex and interracial marriage as well as requires a marriage to be federally recognized if it was legal in the state where it occurred.

On Tuesday, Zola placed a full-page ad in The Washington Post resembling a wedding announcement inviting the Senate to codify marriage equality and created an informational website about the legislation. Meanwhile, Tinder rolled out an on-platform campaign spotlighting LGBTQIA+ couples who met on the app. There’s also a landing page where users can email their senators in favor of the bill’s passage.

“The goal of this campaign is to drive our members to contact their senators and urge them to support the Respect for Marriage Act,” said Melissa Hobley, global CMO at Tinder. “In this current climate, we felt it was really important to take an even stronger stand for the LGBTQIA+ community.”

The two are the latest in a slew of brands pushing the Senate to pass the legislation. Back in July, major media and tech companies, including The Walt Disney Co., Comcast Universal and Sony Pictures Entertainment, signed onto a Human Rights Campaign letter pushing the Senate to codify marriage equality into law.

Since the Black Lives Matter movement of 2020, people have increasingly expected brands to take a stance on social issues. Things reached a fever pitch in June after the Supreme Court’s decision to overturn Roe v. Wade, pushed brand strategists to revisit the idea of brand purpose. In response to the overturn, contraceptive brands increased online advertising, Planned Parenthood, too, increased its ad spend with Meta and TikTok, while brands and agencies rushed to cover travel expenses for employees in need of abortion care.

It’s unclear how much either brand spent on their respective campaigns as executives declined to outline details. Earlier this year, Digiday reported that Zola spent $8.1 million on advertising in 2021, down from $28.2 million in 2020, per Kantar. Those figures don’t include ad spending on social media as Kantar doesn’t track social media spending. Per Pathmatics, Tinder spent $3.3 million on advertising so far this year, up from the $1.8 million spent in 2021.

Industry experts say the pressure will continue to mount as SCOTUS’s next term is expected to be as contentious as the last with issues ranging from reproductive rights and climate change to marriage equality and trans rights.

“What’s clear is that many brands are hedging on brand activism,” said Robb Henzi, svp of strategy and head of policy and philanthropy practice at Sparks and Honey cultural intelligence consultancy. “…brands will be compelled to be exceedingly choiceful about both the issues they champion, given this expanding set, and how they communicate about and around them,” he said.

Still, other industry experts are skeptical about advertising campaigns in reaction to political moments.

“What concerns me about how many brands currently approach marketing and advertising around these moments is that they see dollar signs instead of human impact,” said Rachael Kay Albers, creative director and brand strategist at RKA Ink, a branding and marketing agency, via email. While tempting for a brand to jump into cultural conversations for clout and clicks, today’s shoppers are less tolerant of superficial campaigns. She added: “To truly build a purpose-driven brand means to align a company’s operations with its values first — and then talk about it (and advertise about it) later.”

Tinder, Zola and brands like them have long since made public comments and campaigns around societal issues. Back in 2019, Zola announced it would stop advertising with Hallmark after its ad depicting two brides kissing was rejected.

“The issues where we have taken a stand like this, and where we will continue to take a stand, are ones that reflect our values, which include the right for people to get married, no matter their race, religion [or] sexual orientation,” said Shan-Lyn Ma, CEO and co-founder of Zola, in speaking to Digiday for this article.

It’s unclear when the Senate will take up the marriage legislation. But as more legislation potentially comes down the pipeline, Henzi says brand marketing campaigns are important to remind people of what’s coming politically. “And, frankly, it’s putting real skin by prioritizing actual investment in supporting causes — real money where an organization’s mouth is,” he said.