‘No more panic’: Fashion week gets over its midlife crisis 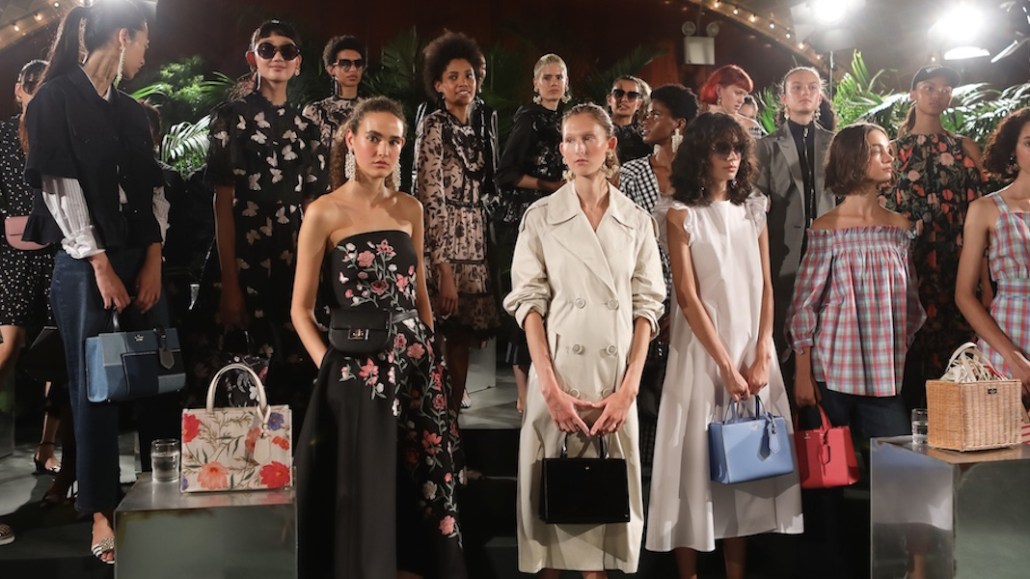 The past few seasons of New York Fashion Week were full of hand-wringing and existential crises, as designers and observers panicked over how see-now-buy-now and social media were changing the fashion show as we knew it.

This season, the dust appears to have settled.

“People are adjusting. There’s no more panic. It’s more of an ongoing conversation,” said Laurie de Jong, founder and CEO of the event production company LDJ Productions, which works with fashion designers including Christian Siriano. “When there are new options on the table, it tends to cause a lot of confusion. But a lot of options on the table means an opportunity to decide what’s right on the individual level.”

Last year, the CFDA released a report on the state of New York Fashion Week, conducted in partnership with the Boston Consulting Group, that assessed the format and function of the event. The ultimate advice to participants: Do what you want.

The traditional show setup has dissolved, along with the disappearance of one central show venue, and designers are embracing the freedom, choosing presentation formats over runways or a Brooklyn backdrop over Manhattan.

And the industry is still divided on see-now-buy-now, the in-season business model that dominated conversation in recent seasons. While designers including Tom Ford and Thakoon have abandoned it, citing logistical complications, brands like Ralph Lauren, Rebecca Minkoff and Milly aligned the release of new collections to the runway shows.

“For this show, I really wanted people to be part of the experience — to pass through it, breathe it in. That creates an emotional attachment,” said Michelle Smith, the creative director and co-founder of Milly. The brand’s Friday presentation in Soho was set up in its first pop-up store, which opened the following day. A rack of about 30 pieces from the new collection were available for purchase in the back.

Scenes from the Milly presentation in Soho

“It makes sense to align the show and the release of the collection, because shows aren’t an insider thing anymore,” she said. “Social media has changed the landscape, and the rest of the world doesn’t want to wait six months. We offer a taste right away, for instant gratification.”

At fashion week, it’s hard to escape the word “experience,” and bonus points if it’s attached to “emotional.” Because what fashion brands need today — whether they’re selling collections in time with their events or not — is to be remembered, so people will remember to buy. Even as designers are exploring new show formats, there’s one unifying motivation behind the events of New York Fashion: reach. Today, when brands are spending hundreds of thousands of dollars to put on show spectacles that will cause scrollers to pause in their feeds, the shows have to have legs.

At the Kate Spade presentation, held at Grand Central Oyster Bar, models conga-lined through the crowd before posing at intervals to shimmy around next to a jazz band, as attendees milled around to get the best view. President and creative director Deborah Lloyd said the idea behind the show setting was to force people to interact and look up from their phones. But, she conceded, she was glad to see people viewing the show through their phone lenses, too.

Models at the Kate Spade show (Photo via Sam Nandez/BFA.com)

“In a presentation like this, you can get up close with the clothes and see all the details,” said Lloyd. “Yes, people are going to record it, but I’m happy about that. It’s for posterity.”

De Jong said she’s spent time over the past few years working with clients who have considered only live-streaming their new collections, or going straight to social media to debut new items, as designer Misha Nonoo has experimented with on Snapchat and Instagram in the past. But they always come back to the same decisions: The live event is worth the investment.

“For fashion clients, it’s a question of whether or not the runway show is worth the hundreds of thousands of dollars it requires,” she said. “But there’s really no substitution for the live experience. What happens after before, during and after, though, is critical: If they can extend beyond the 1,500 people who can fit in the room, it’s worth it.”

This week, LDJ Productions announced it was partnering with Anvil Venture Partners to launch an accelerator and investment fund called LDJ Futures, meant to funnel resources into developing a new ecosystem around brand experiences in the fashion, beauty and technology industries. For fashion brands, those resources will be put towards extending the life of fashion shows and generating more revenue, a strategy that includes, but isn’t limited to, the adoption of see-now-buy-now.

The first company working with LDJ Futures is Candy Labs, an augmented reality company that embeds GPS beacons into the fabrics of items in a designer’s collection. When a photo is taken of the beacon, it will surface information like when and how it can be purchased and background on how it was made. Down the line, LDJ Futures will be focusing on making both information and purchases around the fashion show accessible to all of the outsiders who are seeing these events unfold on social media.

Instagram continues to play a starring fashion week role, even when a designer’s fashion show is dripping in exclusivity. Just look at Ralph Lauren: On Tuesday evening, the brand transported 300 fashion insiders upstate to Bedford, New York, where its Fall 2017 see-now-buy-now show was hosted inside the designer’s classic car garage. All invited were instructed to wear black and white formal attire. The production was orchestrated to play out over a 24-hour stretch on Instagram Stories, where behind-the-scenes content was shared and streamed with the goal it would spark enough desire that viewers would be compelled to watch the show, then shop the collection.

“The fashion show hasn’t changed. It’s just introducing a season or a collection to the world. But then social media comes into play,” said Cassandra Napoli, assistant editor at WGSN. “That opens up a world of access that brands have to be smart about, rather than approaching it with a fear of the unknown.”