‘Let’s put it out in the world’: Why Code and Theory is creating its own thought leadership publication, Decode 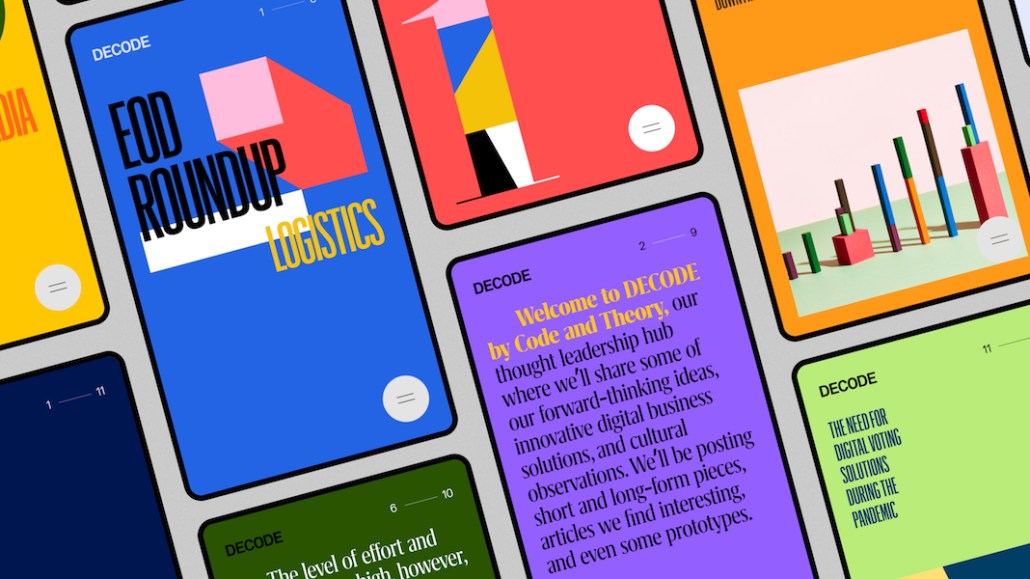 In recent years, Code and Theory has been the go-to design shop for digital publishers like Bustle and The Daily Beast. Now, the New York-based agency is using its digital design and strategy expertise to create its own digital publication of sorts, Decode.

Doing so is a way for the agency to “practice what we preach,” said Brent Buntin, CMO at Code and Theory, adding that the shop has worked in over 120 different newsrooms over the years. The publication, which will be available via the agency’s website, gives the agency a home for op-eds and essays by its staffers, many of whom have been writing pieces for industry publications in recent years. “We’re like, ‘given the effort we’re putting into this why don’t we just start publishing it?,’” said Buntin of the pieces.

Decode will not only publish written content by staffers but also serve as a testing ground for digital design prototypes made to make the online reading experience more interactive and unique. For example, the Decode site uses a “card system” and a horizontal scroll. As for editorial extensions beyond op-eds and essays like podcasts or video, the shop expects to try out other forms of storytelling in the future as it will use Decode as a way to test new ideas it will eventually bring to clients.

Code and Theory isn’t hiring an editorial team to run Decode. Instead, strategists within the agency will own a particular vertical — such as government, healthcare, media and publishing, education or logistics — acting as that vertical’s editor who will gather content from the agency’s roughly 500 staffers and populate it regularly. CEO Dan Gardner will oversee Decode. Editorial decisions will be independent of clients. However, the shop does expect to collaborate with clients as well as other agencies on Decode content.

The agency isn’t looking for its publication to be a new revenue source as it won’t be using an ad-supported model for Decode. However, getting more attention for the shop is one of the goals and by regularly publishing content, Code and Theory is hoping to attract new clients as well as new talent to the agency.

This isn’t the first publication created by an agency. Shops like SubRosa and Omelet have previously ventured into magazine publishing with a bi-annual print magazine, La Petit Mort and a quarterly glossy, Wake Up, respectively. More recently, agencies have created digital publications and used platforms like Medium to do so. For example, Huge’s digital publication, Magenta, uses the platform.

That Code and Theory is building a publication now makes sense to Allen Adamson, co-founder of Metaforce and brand consultant. “It gives them a platform for thought leadership, which they need as an agency,” said Adamson. “Their core audience of publishers will gravitate toward [an agency that understands what they do]. This helps with brand visibility.”

As for launching during the Coronavirus, the shop was working on Decode prior to the outbreak. While the agency has observed that execs across the industry are now posting more thought leadership content online amid the pandemic, releasing the publication now isn’t due to the pandemic.

“We’re not trying to sit this out until 2021,” said Buntin, adding that the shop has been working on Decode for months. “We’re not planning to go back into the office until January. Don’t want to take a wait and see approach. We designed it, we built it, let’s put it out in the world.