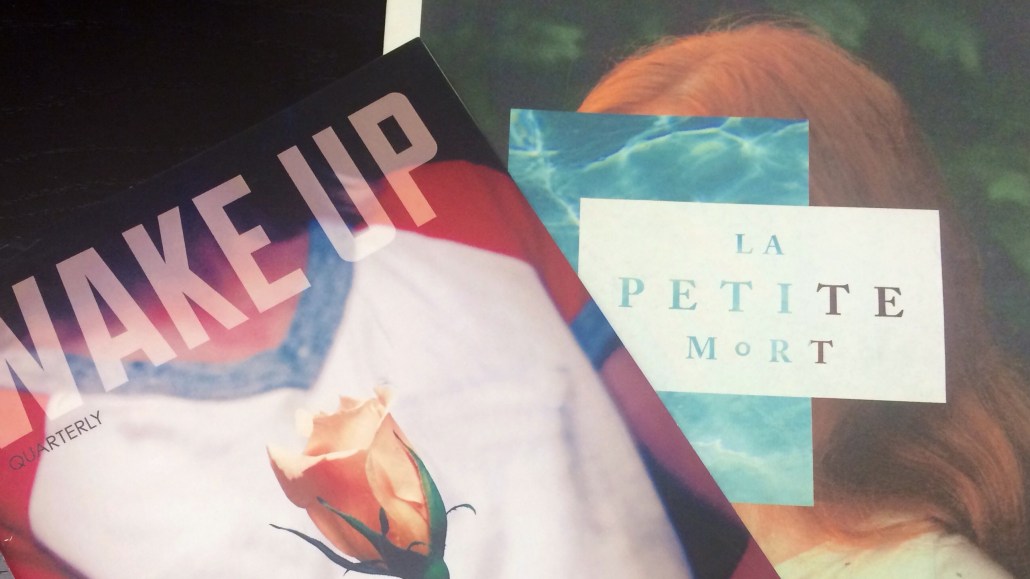 Publishers are thinking like agencies. Brands are trying their hand at publishing. And increasingly agencies — many of which have taken to publishing their own in-house magazines and online content hubs — are dabbling in the written word too.

For the most part, these publications — some of which are quite slick — are exercises in marketing. They’re distributed to staff and clients, and they adorn agencies’ waiting areas. The stated reason for the time, effort and expense that goes into a 60 page quarterly glossy like Wake Up: thought leadership. The unstated reason: it’s a nice ego boost, not that agencies would ever do anything for that reason.

R/GA has an oversized magazine it sends out. Wieden + Kennedy circulates weeklies tailored for its individual global offices. They are embodiments of the truism that everybody’s in the publishing business nowadays. And they’re also a testament — despite the fact many agencies publishing these are all-digital — to the enduring power, and prestige, of print. The magazines also point at the uncomfortable reality facing many agencies: They’re often not well-differentiated from their competitors, forcing them down the dreaded route of competing on price.

“The pie has stayed the same size,” noted Harley Block, the senior vice president of marketing and brand development at Rokkan, “but the number of hands reaching out for it have increased.”

Not everyone is feeling the magazine route. Ogilvy did away with its magazine Red, which ran until 2008.  It now circulates a bimonthly internal email newsletter where it links to new work, online content and internal events.  Huge skips the magazine in favor of  a web portal, Huge Ideas, which has everything from white papers, to case studies, to videos.

“We don’t just talk the talk, but also walk the walk,” Tom O’Reilly, Huge’s director of content, said. “We advise our clients to be publishers, so we should do the same thing.”

While their publication schedules vary, most agency publications consider themselves to be platforms for stimulating conversation and for “thought leaders” to engage and share their insights with the industry. Some agencies say their audiences and clients demand it; others say it’s a way to attract potential clients.

Omelet
The Los Angeles-based agency publishes its own glossy tabloid “Wake Up” every quarter, distinctive because of its edgy layout. It has had five editions so far and can also be found on the online magazine hub Issuu. The issues are based around themes that the agency’s clients are interested in— sans the jargon.

The latest issue focuses on explaining branded content, such as articles detailing the history of content marketing, purpose marketing and embedded marketing, among others. Two past editio
ns have centered on Gen-Z and the millennial generation. Each edition is a highly collaborative process with rotating editors, and where all employees are encouraged to pitch and write stories.

Sean McNamara, Omelet’s Chief Strategy Officer said that he viewed Wake Up as an extension of Omelet’s ability to create content for its clients as well as itself.

“We are constantly rethinking storytelling,” he said. “But we don’t just explain the what; we do Socratic questioning and go into the why too.”

MediaCom
Blink, MediaCom’s magazine aims to help marketers stay on top of the newest ideas, and the best work and content industry wide. Articles are written both by its own employees as well as a wide range of “thought-leaders,” including marketing experts, technologists, media partners, researchers and academics.

Each issue has a theme, with some recent ones being “Winning in 2020,” “The Passion Issue,” “The Connected Issue” and “The Consumer Issue.” It reaches nearly 15,000 readers, including current clients, prospective clients, journalists and even colleges and universities. Alongside Blink, MediaCom also publishes several reports and white papers throughout the year, including recent features on the World Cup and the Cannes Lions Festival.

“Blink is a way for us to bring together our thought leadership as well as have a strong voice in the industry,” Daniel Haack, the associate director of marketing at Mediacom, said.

FleishmanHillard
True, FleishmanHillard’s online magazine was launched as part of its brand refresh in May 2013, with the aim of helping “elevate the discussion around communications, marketing and media.” It is intended to not only serve as a tool for Fleishman’s practitioners and clients but also to help Fleishman maintain its own intellectual leadership.

True publishes a new issue once a quarter and has weekly updates within the quarter. The issues have been built around themes such as brand and reputation, social and digital, and data and analytics. Each issue has averaged at about 33,000 unique page views, according to Pat Wechsler, its editor.

“Our job is to enhance and stimulate conversation, not only on behalf of our clients but also the industry,” she said.

Sub Rosa
Sub Rosa’s biannual print magazine “La Petite Mort” is aimed at its employees, rather than its clients. The experiential design firm has put out two issues of its magazine so far, one coinciding with the Winter solstice last year, and a more recent one timed with the Summer solstice. It is framed as an outlet for its edmployees to celebrate all the things that excite them as well as introduce themselves to the world in a non-traditional way, according to its design director Natalie Sims.

It also embodies its name, which translates as “the little death” in French– an euphemism for the post-orgasmic state, a state that Sub Rosa’s employees strive for even in their artistic pursuits, according to Sims. The content of its latest issue has the theme ‘Rebirth,’ and is an eclectic mix of photo essays, reports and horoscopes.

“It is a form of self-expression for us,” Sims said. “We try to focus on what breaks through the everyday and causes a moment of pause.”

R/GA
R/GA was one of the first to hop on board with FutureVision nearly 10 years ago, which has since gone through several phases of evolution– and now functions as a quarterly print newsletter as well as a digital magazine that has sections which are updated daily, weekly and monthly updates. These sections offer in-depth trend briefs, breaking news, and inspiration from the best in digital marketing, social tools and mobile technologies. The digital hub also serves as a common bank– to gather the ideas and insights generated by its employees worldwide.

The quarterly print version of FutureVision is based on themes and is usually launched to coincide with an important industry event– with the most recent one being “Creativity in the connected age,” launched at Cannes this summer. It has 3,000 copies, which are circulated among employees and clients.

“We really think its important to have that tactile experience of the print magazine, and also lends credence to our tone,” said Daniel Diez, R/GA’s global CMO.