Earlier this month, we gathered over 100 marketers and agencies in Scottsdale, Arizona, for the Digiday Programmatic Marketing Summit.

During the summit, speakers and attendees discussed some of the biggest challenges in programmatic advertising, including the struggle for brands to bring programmatic in-house, the difficulty of scaling private marketplace deals and the responsibility advertisers have to remove their ads from extremist websites. Here are some data points from the event: 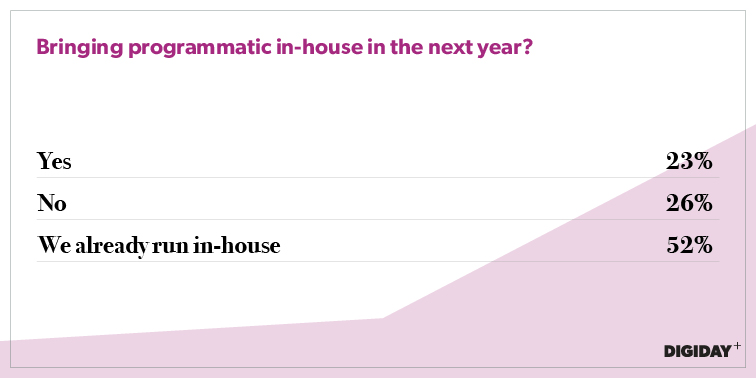 At the summit, pharma brand Bayer shared how it brought its data-management platform in-house in January, which helped the brand cut its video ad rates by 70 percent. But Bayer’s agency still controls its DSP. This kind of arrangement is becoming more common.

“Consumer data is the crown jewel for a brand,” said one attendee. “Bringing data platforms in-house is becoming popular because the data can be used outside media campaigns for direct mail, store promotions and consumer outreach.”

Since DSPs are only used in ad campaigns, less incentive exists for brands to invest in bringing them in-house. And since agencies have a lot more experience using DSPs to buy inventory, brands have further reason to be skeptical of operating their own DSPs. Some programmatic-adept brands, like Netflix, will go all-in on bringing programmatic in-house. But expect a trickle, not a flood, and expect DMPs to come in-house before DSPs.

PMP shortcomings
With marketers spooked about having their ads appear next to extremist content, there’s been a trend to ditch open exchanges in favor of PMPs. With PMPs, advertisers get better control of what websites their ads appear on, and publishers get more visibility into what rates their inventory sells at. 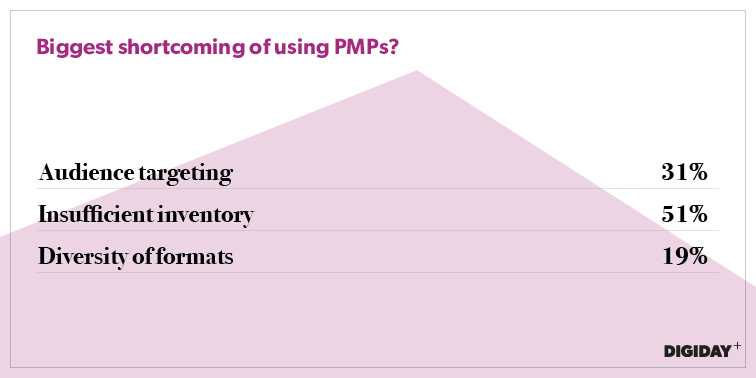 Although these deals are growing, their growth is inhibited by the lack of programmatic direct in mobile. Only about 10 percent of programmatic direct inventory comes from mobile apps, even though eMarketer estimates that in-app ad spend in the U.S. reached $33.1 billion in 2016, which was greater than the $24.9 billion that was spent on desktop inventory in the U.S. in 2016.

Advertiser responsibility
Since the presidential election, brands have faced pressure to pull their ads off sites that produce racist, sexist, hateful or outright false content. But these sites often provide cheap reach, so the ROI might justify the risk of getting called out by activists. 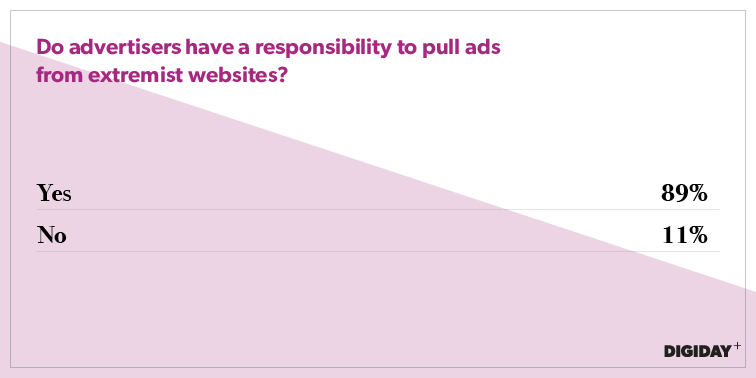 Overwhelmingly, marketers told Digiday that brands have a responsibility to pull their ads from extremist websites, even if they’re having good results. The bad news is that even if brands put their money where their mouth is, blacklists often fail in programmatic buying, and due to the perpetual reselling of inventory by SSPs, brands can still wind up on sites like Breitbart that they thought they’d cut out.

Despite the call for accountability, one attendee said he expects little to change because “nearly everyone in ad tech benefits from the lack of transparency.”