The state of programmatic direct in 4 charts

Programmatic direct is hotter than a Times Square Rolex as brands want to avoid the grotesquerie they face on open exchanges.

Because some websites intentionally mislabel themselves and resell their inventory on open exchanges, ads inadvertently wind up next to brand-unsafe content like racist and sexist articles. By directly connecting advertisers with publishers, programmatic direct helps advertisers control where their ads appear, which helps them avoid fraud, low viewability and proximity to terrorism videos. And for publishers, these deals can be appealing because cutting out middlemen gives pubs more transparency over pricing, and by only working with select advertisers, publishers have more control over what brands appear on their properties — and tend to make more money, no small consideration. The data shows that spend on programmatic direct is up and more pubs are setting up these deals, but its adoption on mobile apps remains slow.

Here are four charts on the state of programmatic direct.

One reason why programmatic direct spend is up is because “marketers who fear that their buying agents are not always acting in their best interests” are able to maintain tighter control over their ad spend with programmatic direct, said Forrester analyst Susan Bidel. 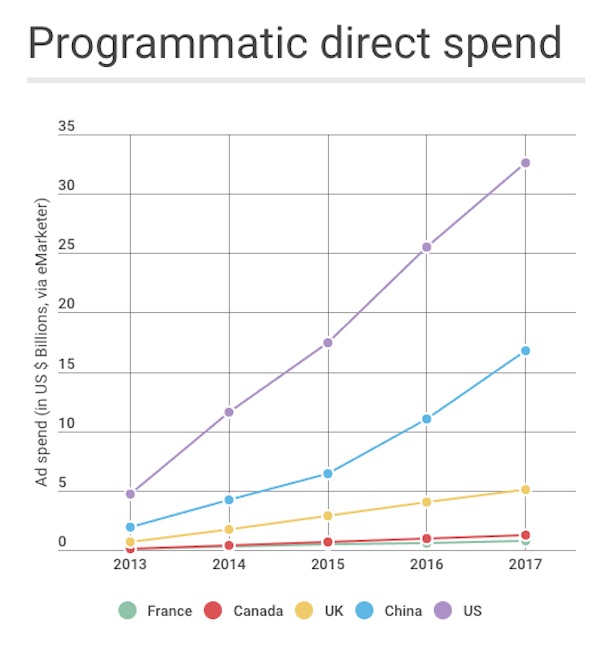 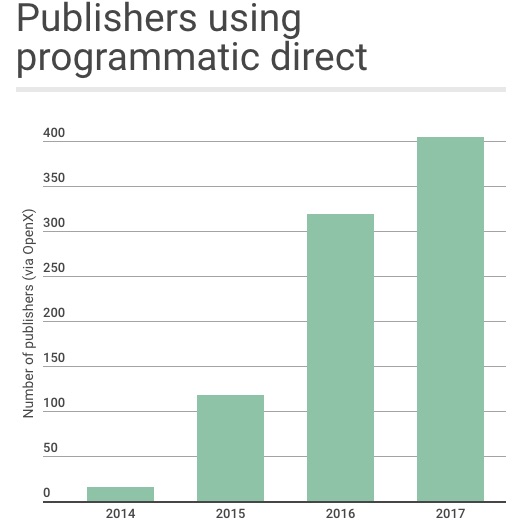 Open exchanges are losing clout
Prohaska Consulting analyzed ad spend across six supply-side platforms and found the percentage of programmatic spend that ran through the open marketplace declined by about 10 percentage points in the fourth quarter of 2016.

“Fraud is an ongoing concern for advertisers,” said Kelly Mullins, head of programmatic partnerships at mobile ad tech firm Tune. “Going direct to a publisher doesn’t eliminate that risk entirely, but it does reduce it considerably.” 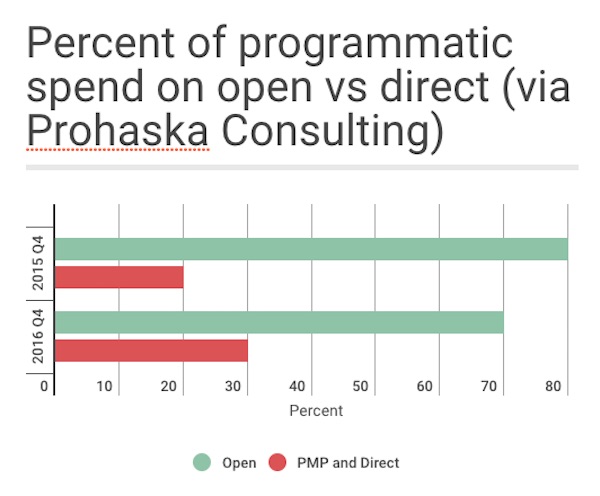 A major contributor to the slow app adoption is that the ad tech platforms involved in programmatic buying were set up to solve a desktop challenge. Whenever new bidders are added to an app, they have to upload their software development kits that allow third parties to integrate their features. Since uploading these kits slows down load times and hurts user experience, many publishers avoid mobile app header bidding altogether, regardless if the inventory is sold through private deals or on an open exchange, said Matt Prohaska, CEO of Prohaska Consulting. As the chart below shows, only about 10 percent of programmatic direct inventory comes from mobile apps, even though eMarketer estimates that in-app ad spend in the U.S. reached $33.1 billion in 2016, which was greater than the $24.9 billion that was spent on desktop inventory in the U.S. in 2016.

Hear more from Ross Benes on the current state of programmatic at the Digiday Programmatic Marketing Summit. Learn more about joining us here.