Media buyers plan to grow their video advertising investment aggressively in 2019, particularly in mobile and on connected TV and streaming platforms, according to Digiday research.

From a survey of 282 media buyers conducted in November, 86 percent of respondents said they expect to increase spending on mobile video ads next year. Seventy-four percent of buyers said they will also allocate greater budgets to connected TV and streaming platforms in 2019, while 65 percent said the same about desktop video ads.

Spending on video advertising is surging, which is unsurprising given the growth of digital video consumption in recent years. As Gosha Khuchua, U.S. managing partner at mobile agency Fetch noted, advertisers now have little choice in deciding where to advertise as consumers migrate their media consumption from legacy channels such as TV and print. “Brands need to go where the people are and at this point, it’s video,” he said.

As a result, EMarketer estimates that nearly $28 billion will be spent on digital video ads this year, comprising roughly 25 percent of the total digital ad market.

According to Digiday’s survey, marketers are less bullish on legacy formats like linear TV and radio advertisements. Forty-three percent of Digiday survey respondents indicated they are cutting back the amount they spend on linear TV advertising and just 9 percent said they plan to increase it next year.

For many media buyers, the shift to digital video is a no-brainer because, quite simply, it performs. “What we’ve seen is that our customers respond to video content… and that our customers are especially hungry for mobile video content,” said Kevin Saliba, senior vice president of marketing of online marketplace zulily. Because of that, Saliba said zulily is increasing its focus on mobile video performance advertising in 2019. 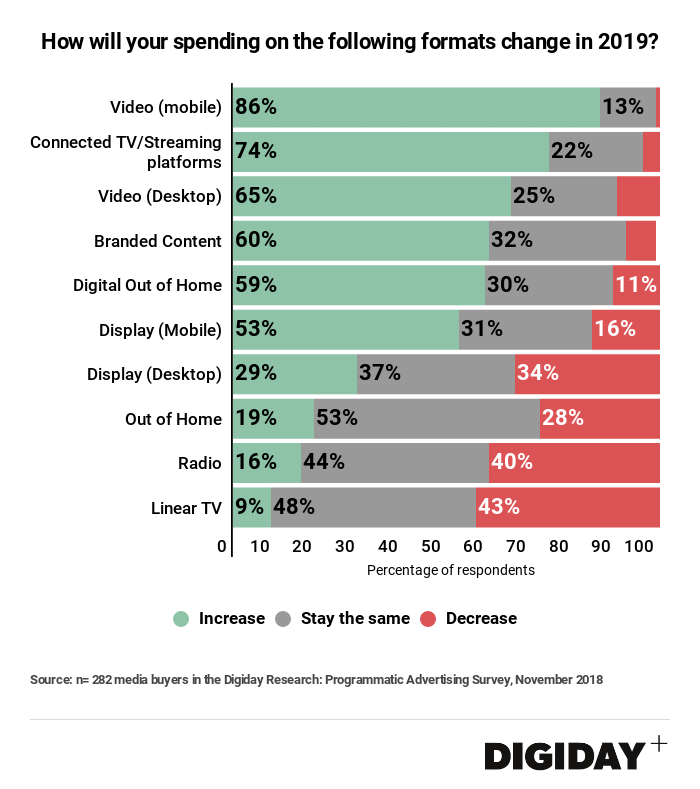 One pitfall with digital video, however, is it’s susceptibility to ad fraud. Lured by the high CPMs premium video ads can command, fraudsters are rapidly turning their efforts to the format.

The Guardian recently ran a test where it acted as a buyer of its own inventory. It found that without ads.txt being enforced for video impressions, over 70 percent of dollars intended for the Guardian went to fraudulent video impressions. A contributing factor to the problem is that many of the safety nets and guardrails, like ads.txt, aren’t applicable yet to mobile advertising.

But with new spending could come fresh solutions and a greater awareness by advertisers. Khuchua added, “For many brands, [issues with fraud and brand safety are] something that they learn as they get into the space. The shift in dollars being spent against this format is going to help accelerate positive change through technological innovations and a higher level of scrutiny by top brands.”