Digiday polled 211 media buyers this March and asked them to rate their return on investment from Stories ads on Instagram, Facebook and Snapchat. Respondents’ answers were weighed on a scale of one to five, where five delivered the highest ROI for advertisers and one delivered the lowest. Instagram Stories came out as the top performing Stories ad with a weighted average score of 3.34. Facebook’s Stories ads, though much newer than Snapchat’s, had an average score of 2.75, just above Snapchat Story ads’ score of 2.64.

Facebook’s decision to match Snapchat’s Story product for its Instagram and Facebook apps has proved a fruitful one. Stories ads, since they launched on Instagram in 2017 and Facebook last year, are helping drive new revenue growth for Facebook. For advertisers, Stories ads provide effective ways to reach consumers at cheaper rates than in-feed placements. But what has made Stories ads so successful for buyers on Instagram, more than on Snapchat, is the data and optimization tools marketers have access too.

When advertisers target campaigns on Instagram, they have access to Facebook’s wealth of audience data. That information coupled with the optimization algorithms fueling Instagram Story performance, is what gives Instagram Stories ads “such a leg up over Snapchat Story ads’ performance,” said Charlotte Kleiman, performance lead at Social Code.

User behavior is also one factor helping make Instagram Stories successful for agencies and advertisers. “Not only does Instagram have massive scale,” said Nate Schoeffler, associate director of paid media at VaynerMedia, “but users are making Stories a key part of their experience on the platform.” Since Stories are so central to how users interact with content on Instagram, it’s becoming a focus for advertisers too. 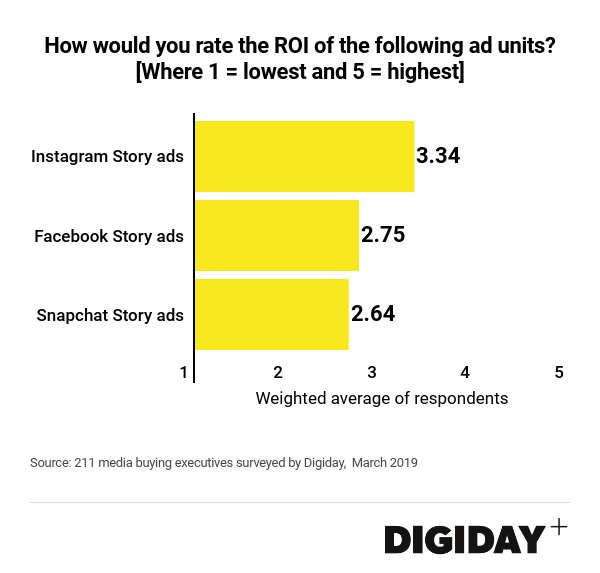 In terms of pricing, Stories ads were pretty comparable on all three platforms. Schoeffler observed that CPMS for Stories ads across Facebook, Instagram and Snapchat, “all typically range from $2 to $4, which is far more efficient than what we’re seeing with in-feed units.”

Meanwhile, advertisers have been able to find relatively cheap ad placements when buying on Snapchat thanks to the platform’s introduction of programmatic pricing. Even if Snapchat isn’t as effective as Facebook or Instagram, lower prices will still help deliver higher ROI for advertisers.

Facebook Stories ads could still have their moment. Though less popular than Instagram Stories, they still share the same pool of data that attracts marketers to Instagram. “Facebook Stories have the ability to become as strong and Instagram Stories, right now, we’re just not seeing the same scale of available inventory yet,” said Schoeffler, which is likely a result of limited consumer interaction with them. Tessa Kavanaugh, vp social director at Socialyse said, “Over the past several months we have begun to see traction with Facebook Stories,” but that younger audiences desired by marketers still prefer to consume content primarily on Instagram Stories.

In the end, Instagram Stories ads are seeing far greater adoption and are delivering higher ROI for media buyers than Snapchat. Earlier Digiday research found that 79 percent of media buyers plan to increase their spending on Instagram in 2019 while only 19 percent of said the same about Snapchat.